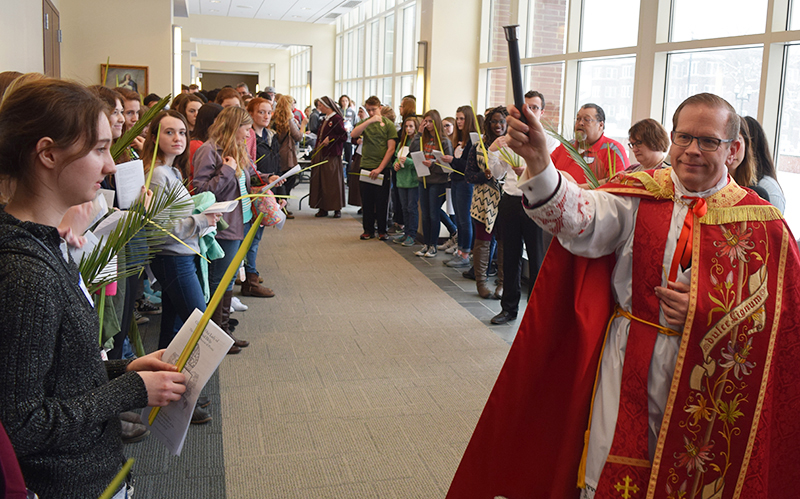 On the eve of Holy Week, in the middle of a spring snowstorm, the time was right for more than 100 Catholic teenagers from around the Diocese of Peoria to choose a life of greatness. 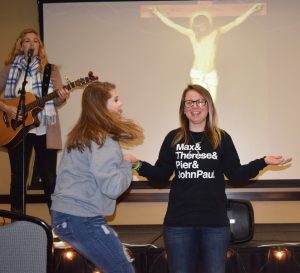 A spirited game of Name That Tune pitted boys against girls at the Diocesan Youth Rally. Here Hannah Legner of St. Mary Parish, Pontiac, is the first to tag emcee Amelia Misiak to give a correct song title and artist on behalf of the girls as keynote speaker Jackie Francois Angel plays guitar. (The Catholic Post/Tom Dermody)

“If you want to be a saint, you have to start right now living it,” said Jackie Francois Angel, keynote speaker at the 2018 Diocesan Youth Rally. “I don’t want you to settle for a life of mediocrity.”

Moments later, as the rally participants held palm branches before processing into the chapel at the Spalding Pastoral Center for Mass, they heard a similar invitation.

“This is our week. This is our Holy Week,” said Msgr. Stanley Deptula before blessing the palms. Unlike stories of yesteryear told by their grandparents, the accounts of Jesus’ final days to be recounted in readings and liturgies in the coming days “are as real today as they ever were” and can change our lives, he said.

“Let us live, let us hear, let us remember our family story,” said Msgr. Deptula, who is rector of St. Mary’s Cathedral and pastor of St. Bernard and Sacred Heart parishes in Peoria.

“Spirit Lead Me” was the theme for this year’s youth rally, coordinated by the Diocesan Office of Evangelization and Faith Formation. 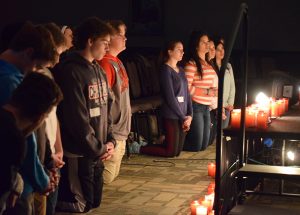 Participants in the 2018 Diocesan Youth Rally in Peoria on March 24 kneel before the Blessed Sacrament during a holy hour of eucharistic adoration. The lines were long for the sacrament of reconciliation which was also offered during the period of quiet prayer. (The Catholic Post/Tom Dermody)

Nearly 200 high school-aged students and adult chaperones had registered for the event, but heavy snow that developed throughout the day caused more than 50 from further distances to stay home, according to Karley Bates, programs coordinator. In addition, plans to process to St. Mary’s Cathedral for the closing Mass were canceled. The Mass was moved to the TEC Chapel in the pastoral center.

The rally ended about two hours earlier than planned so that participants could travel home in the daylight.

“We pray that while outside it may be cold, that inside we might be burning with love for you,” said Amelia Misiak, a youth minister from St. Mary Parish in Pontiac, in an opening prayer. Misiak, who also teaches junior high religion at the parish school, served as emcee for the day, which in addition to two keynote talks by Angel and the Mass included games, vocation talks, and a holy hour with opportunity for the sacrament of reconciliation.

“Seeing the kids line up for confession was awesome and then spend precious time in front of Jesus in the Eucharist was a powerful sight,” Misiak later told The Catholic Post.

Bringing abundant energy and passion for the Catholic faith was Angel, a Catholic singer, songwriter, and youth minister from Orange County, California, who asked the youth to consider her “their crazy older sister” in Christ.

Angel’s two afternoon presentations were delivered rapid-fire, blending humor — her favorite Catholic pick-up line from a guy, for example, was “Girl, if I had a rosary bead for every time I thought of you, I’d have a glorious mystery” — with serious topics ranging from depression to addiction to recent school shootings. 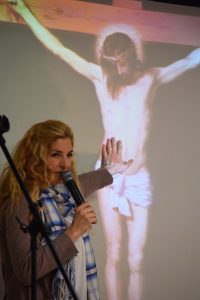 Keynote speaker Jackie Francois Angel points to an image of Jesus on the cross and tells the teens at the Diocesan Youth Rally that “this is what real love is — in true love you’re going to have to sacrifice” for the sake of others. (The Catholic Post/Tom Dermody)

“You should be more afraid of spiritual death than you should ever be of a school shooting,” Angel said at one point. “God doesn’t guarantee we’re going to live until we’re 90 years old.”

Angel told the youths that neither God, nor the Catholic Church, are afraid of their questions.

“We can ask the tough questions” on topics such as abortion, contraception, or the need to confess sins to a priest, she said. The more questions Angel asked in her high school and college years, “the more I was like, ‘Wow, this is so beautiful why the church teaches what it does.”

In urging the teens to call on the Holy Spirit, Angel used the analogy of thick chocolate syrup poured into a glass of milk.

“You’ve got to stir it up,” she said. “You’ve also got to stir up the gifts of the Holy Spirit within you” to be most effectively used by God.

Angel’s second talk focused on dating and the vocation of marriage.

While young people might ask “how far can we go” with someone they are dating before it is a sin, Angel challenged them to consider different questions, including “How can I respect every guy or girl in my life?” and “How can I help lead you to heaven?”

She pointed to the image of Jesus on the cross on a screen behind her and told the teens “This is the definition of marriage, this is what real love is.”

“In true love you’re going to have to sacrifice,” she said.

The group then separated for talks on vocations to the priesthood by Father Kyle Lucas, chaplain of Peoria Notre Dame High School, and vocations to the consecrated life by Sister Lucia, SCTJM.

Bates told The Catholic Post that while the snow held the numbers down, it didn’t hold the Holy Spirit back.

“To me knowing that even one soul was impacted during this retreat was worth everything,” said Bates. “You never know how God will work in the lives of others. It is up to us as disciples of Christ to provide opportunity to lead others to a personal relationship with Christ.”