LA SALLE — Deb Myers expects to shed a few tears when the eighth-graders of Trinity Catholic Academy here perform the Living Stations of the Cross during this Holy Week.

She won’t be alone. The student production — set for 6 p.m. on Wednesday, March 28, and 9:30 a.m. on Thursday, March 29, at St. Patrick Church — will stir the emotions of many as the suffering, death, and resurrection of Jesus are prayerfully and dramatically portrayed. 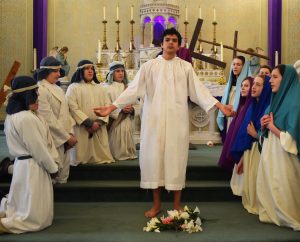 The Resurrected Jesus (portrayed by Stevan Sanchez) is shown in the closing scene of a Living Stations of the Cross. (The Catholic Post/Tom Dermody)

But Mrs. Myers, who serves as assistant principal and director of religious education at Trinity Catholic Academy, has an additional reason to be moved. This is her final time serving as director of the Living Stations, a school Lenten tradition, after a 21-year run.

“Every year is unique,” she told The Catholic Post following a successful dress rehearsal last Friday. While the script and accompanying music have remained much the same through the years, the different personalities and sizes of each eighth-grade class enable them to “make it their own.”

Also new to this year’s production is the addition of a Wednesday evening performance. It was suggested by Father Paul Carlson, pastor of the LaSalle Catholic parishes, so that more parents, grandparents, and people in the community could make the Living Stations a part of their Holy Week experience. The traditional Holy Thursday morning performance, which is attended by the Trinity Catholic student body, remains an option as well.

Mrs. Myers said these eighth-graders were quick to say yes to a second performance.

“They’ve done pretty much everything I’ve asked them to do this year,” she said of the students, who have been preparing as actors, vocalists, musicians, or light and sound technicians since February.

EMOTIONAL FOR ACTORS, TOO

That includes Stevan Sanchez, who is convincing in the role of Jesus. Sanchez said he studied actor Jim Caviezel’s performance as Jesus in the movie “The Passion of the Christ” and has tried to incorporate some of his mannerisms and movements as he carries the cross and repeatedly falls beneath its weight.

The scenes depicted in the Living Stations move the young actors as much as they do their audiences. For Sarah Peters, who portrays Mary Magdalene, the Fourth Station — when Jesus meets his mother on his way to Calvary — is an especially emotional one.

“I don’t know what being a mom is like yet,” said Sarah, “but I know how much my Mom loves me. Mary seeing her son in pain is really moving.” 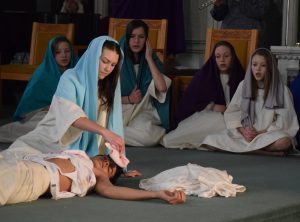 Mary (Lauren Griggs) tends to the body of Jesus (Stevan Sanchez) after it is removed from the cross in this scene from the Living Stations performed by eighth grade students from Trinity Catholic Academy in LaSalle. (The Catholic Post/Tom Dermody)

Ben Stugegia, who is a narrator of the story along with Amilia Sanchez, pointed to a scene where Mary (portrayed by Lauren Griggs) tenderly wipes Jesus’ body after it is taken down from the cross as cast members sing “Hail Mary/Gentle Woman.”

“It’s Mary being a mother,” said Ben. “Having to clean your child’s (dead) body would be an unbearable pain.”

Mrs. Myers called the production a way that students can witness to Jesus’ Passion.

“We talk all the time and teach them about being disciples,” she said. “It’s not just about going to church and saying your prayers. It’s stepping out of your comfort zone sometimes and sacrificing time and giving more of yourself.”

For more information on this week’s performances of the Living Stations of the Cross, call Trinity Catholic Academy at (815) 223-8523.

EDITOR’S NOTE: More photos from the dress rehearsal have been posted to The Catholic Post’s site on Facebook.