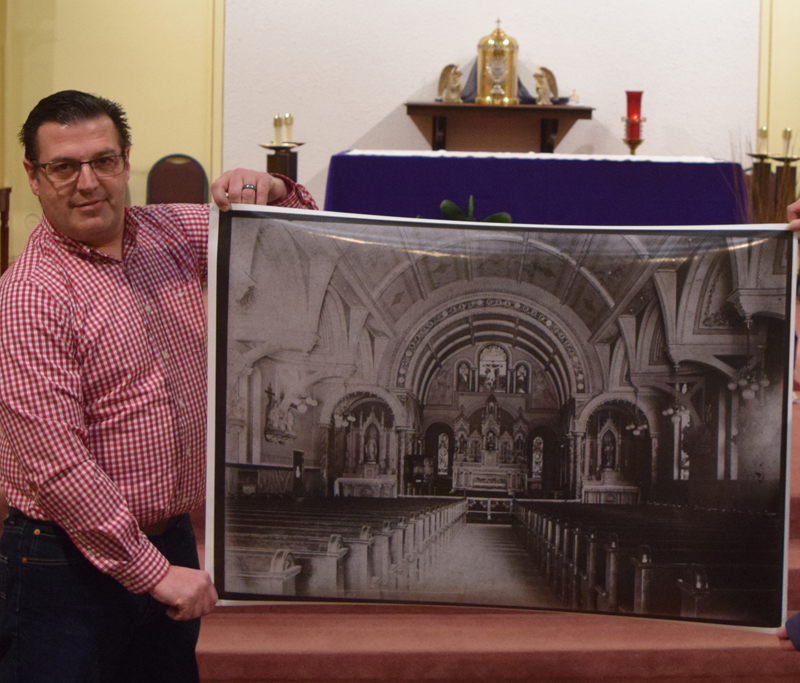 Wayne Cox shows an enlarged photo of the interior of Holy Family Church (the former St. Patrick Church) in Lincoln taken shortly after it was built in 1904. Photos and blueprints of the church were among items Cox found in files that the familiy of architect George Stauduhar donated to the archives of the University of Illinois decades ago. (The Catholic Post/Tom Dermody)

LINCOLN — Wayne Cox is a former corporate executive chef, but what has kept his interest simmering the past few years has been unlocking some mysteries of Holy Family Parish’s 114-year-old church.

“God is trying to say something here,” says Cox, recalling a string of what he believes are Holy Spirit-inspired events and discoveries that led him to a treasure-trove of information on the prominent architect who designed the parish church, dedicated in 1904. 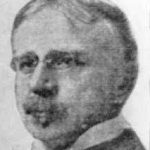 That architect is George Stauduhar. From his office in Rock Island, Stauduhar also designed a whopping 28 other Catholic churches in the Diocese of Peoria and nearly 200 others throughout the Midwest prior to his death in 1928. He was also the architect for other impressive structures such as the Villa de Chantal, a former Catholic girls school, convent, and longtime Rock Island landmark.

How Cox learned of Stauduhar – and discovered files of his work preserved in archives of the architect’s alma mater, the University of Illinois – is a story of persistence and prayer.

FILES ON “CHURCH AFTER CHURCH”

“We had no blueprints for our church,” said Cox, who serves on the church interior committee of Holy Family Parish. Buoyed by a recent bequest that will fund a church addition, the parish is also exploring possible interior renovations down the road.

Cox told The Catholic Post that, while praying after Communion three years ago, he heard a voice inviting him to help “restore the church.” He began doing internet research on the history of the red brick, Romanesque-style edifice, but was getting few results while searching for “Holy Family.” Then he realized the church was under the patronage of St. Patrick until that parish and the former St. Mary merged in 1977 to form the present Holy Family in Lincoln. 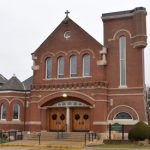 “So I typed in ‘St. Patrick Church, Lincoln, Illinois’ and I got a hit from the University of Illinois archives,” said Cox. A first visit to the Urbana campus revealed a series of letters from the architect to Father J. T. Mulgrew, who was pastor when the church was dedicated in 1904. On a return visit, a different employee directed Cox to additional materials.

Among the Stauduhar files – donated to the university by the architect‘s grandchildren in 1976 – was one on St. Patrick, Lincoln. The first image Cox saw was the original concept painting of his parish’s church. The file also included an entire set of blueprints.

But when Cox presented a copy of the blueprints to parishioner Gary Minder, a closer examination of one found some minor discrepancies. Written on that page was the note “For church in Glendale.

Cox returned to his internet sleuthing and determined that blueprint belonged to St. Gabriel Church of Glendale, Ohio, which Stauduhar would design three years later.  Cox and his wife, Dr. Melissa Cox, would eventually make a day trip to visit what he now calls Holy Family’s unofficial “sister church.”

“We’re paternal twins, not identical,” said Cox with a smile, noting the differences between the similar churches include the bell tower on the opposite side of the entrance and a white stone exterior rather than red brick.

On a third trip to the U of I archives, Cox found the Glendale church’s file and discovered historic photos of the Lincoln church had been misfiled within. The photos show extensive, detailed artwork in the church’s archways and walls that had been painted over years ago. They also presented a mystery – three stained glass windows high above the sanctuary that are no longer visible from the interior or exterior.

Believing the windows might still be present above a back hallway created decades prior, Cox had tuckpointers remove a brick to take a look. The windows were indeed still there, though the great window depicting the Crucifixion was damaged.

The three windows were sent to Jacksonville Art Glass for restoration. The Coxes told Father Jeff Laible, pastor, that they would like to pay for the Crucifixion window’s repair and restoration for a very personal reason.

Their 24-year-old son, Elijah, had a degenerative heart disease and recently underwent a successful heart transplant.

“I want to dedicate that window to the young man who gave my son a heart,” said Wayne Cox. How the trio of hidden windows might be incorporated in the future renovation is still under study, he said.

Meanwhile, Cox would like to spread the word about the George Stauduhar files at the University of Illinois archives in case they might be a valuable resource for other parishes.

“This is stuff you need, especially if you’re going to do some changes to your church,” said Cox. His study has also led to a kind of spiritual kinship with George Stauduhar built on a foundation of gratitude.

“It’s intriguing to me that this man has given so much to our church,” said Cox.