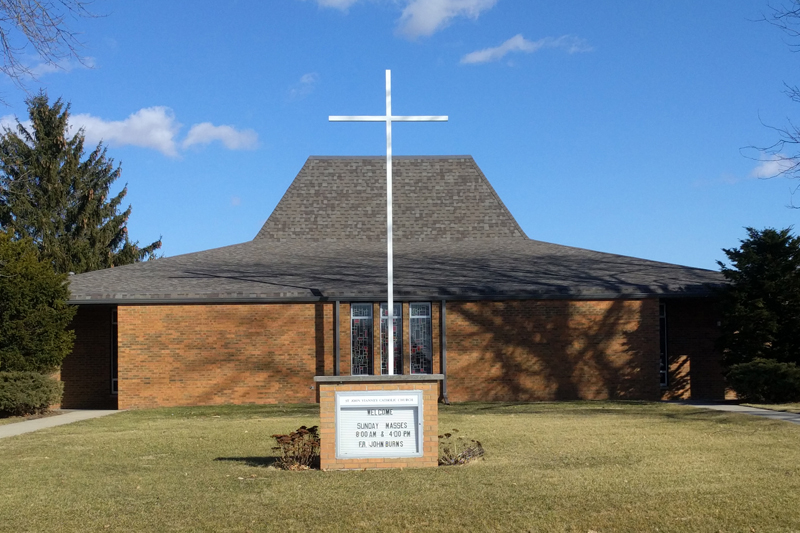 Designed by Father Cyril Schlarman, St. John Vianney Church in Cambridge put a Catholic church in every county seat in the Diocese of Peoria when it was dedicated on March 31, 1968. (Provided photo)

CAMBRIDGE – Members of St. John Vianney Parish were joined by those who helped found the parish for a celebration of the 50th anniversary of the dedication of the church. The 8 a.m. Mass on March 11 was followed by a breakfast hosted by the Altar and Rosary Society in the church hall.

While they dined, parishioners were treated to a slide show of photos from the construction of St. John Vianney and other events over the last 50 years. Pictures of First Communion classes were also displayed.

A few of the church members spoke about the foresight and determination needed to build the church.

Bishop John B. Franz, who dedicated the building on March 31, 1968, said at the time that it was “truly a day of achievement.”

“With the building of this church we have at last established a congregation in every county seat in the Diocese of Peoria,” he said in a letter of congratulations that was published in a booklet marking the occasion. “One can only be in admiration of this pioneering group who have taken the initiative and who have pursued the project to its completion.”

St. John Vianney Parish was established March 13, 1964, with Father George M. Herbach, pastor of St. Malachy in Geneseo, as the founding pastor. Mass was celebrated at the American Legion Hall for three years and then the new parish hall until the church, designed by Father Cyril Schlarman, was completed in time for Mass on Palm Sunday, May 19, 1967.

To keep expenses down, parishioners also donated much of the work needed, including laying block, installing pews, and painting. With these donations of time, the cost for the church and hall was $80,000.

St. John Vianney now has 80 families and is linked to St. John the Evangelist in Galva and St. John the Apostle in Woodhull. Father John Burns has served as pastor of the three parishes since 2005.