After nine-month church renovation, “it’s good to be home” in Wenona 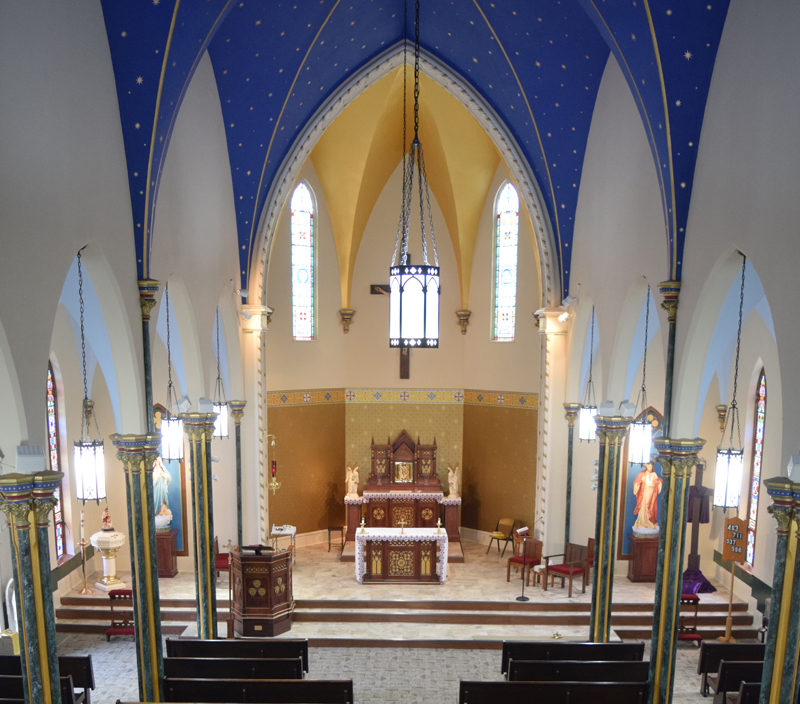 Parishioners returned to the newly remodeled St. Mary Church in Wenona on Feb. 25. The project cost $320,000 and is completely paid for. (The Catholic Post/Tom Dermody)

That was a common sentiment expressed by members of St. Mary Parish here upon returning to their beloved church Feb. 25 when it reopened after nine months of renovations.

“The first couple of homilies we didn’t have to worry about content,” joked Father Steve McKinley, OFM Conv., former pastor and now in residence. Parishioners’ eyes, he said, were busy taking in all the transformations – from new carpeting to paint colors that include a heavenly blue ceiling dotted with stars.

“They never thought it could be this beautiful,” added Chris Beckman, parish trustee.

And the gratitude parish leaders and members felt for the completion of the $320,000 project – which followed three years of planning and fundraising – took more than even a joy-filled Mass of Thanksgiving to express. The parish, in fact, hosted three days of events to celebrate, including an open house, an interfaith service, adoration of the Blessed Sacrament, all capped by a day dedicated to Mary and the consecration of the parish to her Immaculate Heart.

Throughout it all, there was plenty of food and fellowship in the parish hall, as parishioners who had not been together since last June – attending Masses at nearby linked churches in Lostant, Toluca, and Minonk that are also served by the Conventual Franciscans – had lots to talk about.

After another round of cookies, punch, coffee and donuts, Beckman’s sister asked “Don’t you guys observe Lent?”

“It’s been a unique Lent,” admitted Father Steve, who served as pastor from 2014 until stepping down last year for health reasons. Father Patrick Greenough, OFM Conv., is now pastor of St. Mary and its linked parishes.

Among the major aspects of the renovation, accomplished by the artistry of Peoria-based Murals by Jericho with assistance from parish volunteers, are:

“EVERY PARISHIONER DID SOMETHING”

“I can honestly say that almost every parishioner did something” to assist the renovation project, said Father Steve. Some washed the colorful windows; a local blacksmith adapted the votive stands for larger candles; volunteers stained and varnished sanctuary risers, replaced warn kneeler joints, cleaned and repainted heat registers, and hung two new central light fixtures. A parishioner who has a warehouse in Toluca donated space for the pews to be stored during the renovation.

Fundraising began for the “painting project” in July of 2014. As the scope of the plans grew, the parish responded by hosting fundraisers including raffles, GLO Bingo, dueling pianos, pancake and sausage breakfasts, and taking monthly second collections.

“I remember coming as pastor and saying ‘the one thing I promise you is I will not put you in debt,’” said Father Steve. “I didn’t know how I could manage not doing that, but it’s all paid for.”

“Every bit of it,” said Beckman, accentuating each word. The gratitude extended to the community and to the linked parishes.

“We had such great support from non-parishioners,” said Beckman. “People from other parishes gave money towards it because they would go to our Mass sometime. That’s what’s unique with linked parishes.”

And now the community and surrounding area are sharing the joy of St. Mary Parish.

“We were the talk of the town,” said Beckman of the reopening. “Everybody says ‘You have to go see it.’”

While Father Steve said the first homilies didn’t matter, he did admit getting emotionally moved during the inspirational one he delivered at the Mass of Thanksgiving. His theme? “If these walls could talk.”

“They can talk, through us,” he told the assembly. “We are the living stones of the church.”