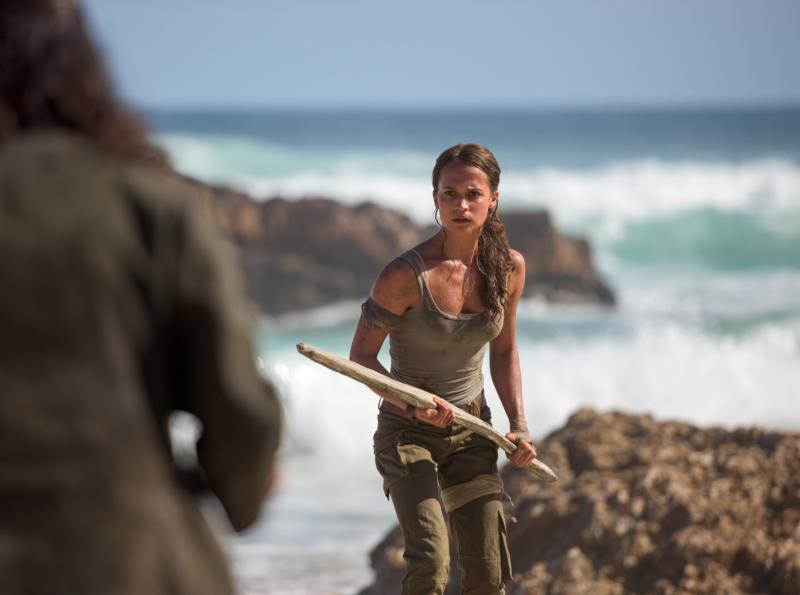 Murky video-game adaptation in which, seven years after the disappearance of her business tycoon-turned-archeologist father (Dominic West), an heiress (Alicia Vikander), who prefers life as a London bicycle courier to enjoying her riches, follows clues he left behind to track him to an almost uncharted island off the coast of Japan where an evil goddess lies buried, and must remain entombed for the welfare of the world. The resourceful lass gets help on her quest, and in her fight against the shadowy organization trying to locate and exploit the deity (served by Walton Goggins), from a hard-drinking Hong Kong sea captain (Daniel Wu).

Director Roar Uthaug’s origin story features the same main character played by Angelina Jolie in 2001’s “Lara Croft: Tomb Raider” and 2003’s “Lara Croft Tomb Raider: The Cradle of Life.” Whether this familiar figure, who is presented in Geneva Robertson-Dworet and Alastair Siddons’ script as equally capable of holding her own in a kick-boxing match and quoting Shakespeare off-the-cuff, represents female empowerment or sophomoric male wish fulfillment may be debatable. But the high volume of nasty mayhem along her path is not.

Occult themes, much harsh violence with some gore, a few gruesome images, at least one use of profanity and a couple of milder oaths, a stifled rough term, about a half-dozen crude words. The Catholic News Service classification is A-III — adults. The Motion Picture Association of America rating is PG-13 — parents strongly cautioned. Some material may be inappropriate for children under 13.