Diocesan students urged to pray, not walk out, to end gun violence 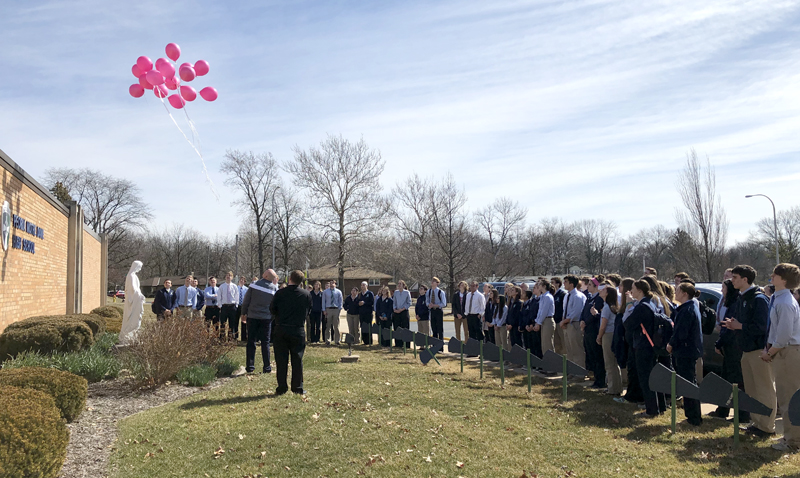 Instead of walking away from school on March 14, students and employees at Peoria Notre Dame High School prayed the rosary between classes and then attended an all-school Mass. After the liturgy, principal Randy Simmons released 17 balloons -- one for each life lost during the school shooting in Parkland, Florida. (Provided photo)

As students around the country were planning to walk out of school to protest gun violence March 14, the Office of Catholic Schools of the Diocese of Peoria asked students in central Illinois to consider taking another approach.

“Our Catholic schools stand in solidarity with those who seek change and conversion in a culture of violence that is destroying innocent life. However, a walkout is not the best course of action for the students entrusted to our care,” Dr. Sharon Weiss, superintendent of diocesan schools, said in a letter sent to pastors and principals this week.

The walkout was to take place one month after 17 students and staff members were killed in a shooting at Marjory Stoneman Douglas High School in Parkland, Florida. The protest was set to begin at 10 a.m. and last 17 minutes.

Noting that some of the sponsors of the National School Walkout advocate positions that are contrary to church teaching on the sanctity of human life at all stages, Weiss asked Catholic schools in the diocese not to permit students to stage a walkout. She added that the decision was also based on concern for student safety.

“Whatever actions we take must always be rooted in the truths of the Catholic faith,” she said. “This day presents a wonderful opportunity to take a different approach and demonstrate the power of prayer and faith in action.”

Some of the alternatives Weiss suggested include:

“Such prayers and activities provide a safe and faith-filled way for our students to enter into an important national discussion about these significant issues,” Weiss said.

The national walkout was organized primarily by youths working with EMPOWER, the youth branch of the Women’s March, which organized marches for women’s rights in Washington and many other cities after President Donald Trump took office.

Another nationwide school walkout is scheduled for April 20, the 19th anniversary of the school shooting at Columbine High School in Littleton, Colorado. A related event is the “March for Our Lives” a youth-led demonstration March 24 in Washington, where 500,000 are expected to attend. Other demonstrations will take place in several U.S. cities to protest current gun laws.

Weiss reminded school administrators, who were asked to share her letter with their school families, of what the U.S. bishops have said: “The advocacy by survivors of the Parkland shooting – and young people throughout our nation – is a stark reminder that guns pose an enormous danger to the innocent when they fall into wrongful hands. The voices of these advocates should ring in our ears as they describe the peaceful future to which they aspire.”