While many of our U.S. athletes are making us proud with amazing performances at the 2018 Winter Olympics in Pyeonchang, South Korea, we’d like to call attention to stories of Catholic grade school athletes in our diocese who this month demonstrated not only the spirit of sport, but of their faith as well.

Volleyball players from Immaculate Conception School in Monmouth and Visitation School in Kewanee pose after the Feb. 7 “pink out.” (Provided photo)

We cheer Immaculate Conception School in Monmouth, which on Feb. 7 sponsored a “pink out” at a volleyball match to support and raise funds for the opposing coach — Julie Yepson of Visitation Catholic School in Kewanee — who is battling cancer. Their efforts brought in $1,200.

And we hoot and holler for the seventh grade basketball team of St. Patrick School in Washington and their fans. They also honored their opponents, from Lovejoy, even as they were competing against them to win a state championship. While St. Patrick is located just a few minutes from the East Peoria tournament site, the Lovejoy team had to travel from near East St. Louis. They brought few fans.

So St. Patrick students and families made their opponents gift bags, filled them on game day with sandwiches, drinks, homemade treats, and donated state final commemorative t-shirts, and snuck the gift bags onto their team bus. They attached the following rhyming note, which we feel merits a printing here:

We feel so humble and blessed

to know that we are playing 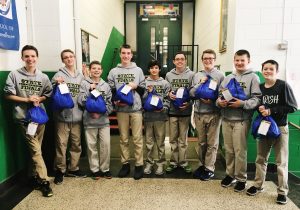 Prior to their state championship game against Lovejoy, team members from St. Patrick School in Washington and their classmates prepared gift bags for their opponents, who traveled to the East Peoria tournament site from their school near East St. Louis almost three hours away. (Photo courtesy Kara Kamienski Photography)

the best of the best.

and this tourney’s not far,

maybe a half hour by car.

We want you to know that

to travel for hours and on a school night.

from the edge of the state

and there’s no telling what time

you’ll get home or how late.

We’re well aware that next time could be us

having to travel so far on a bus.

We wanted to show that you have our support

whether we’re on or off of the court.

We all work so hard for the love of the game

And in so many ways we are all the same.

We play with respect and work to compete.

We are student athletes!

We note that St. Patrick School is one of those utilizing SportsLeader, a Catholic virtue-based formation program for coaches. In a letter to Lou Judd, director of SportsLeader, St. Patrick head coach Jeff Draeger said “This is what sports is all about.” 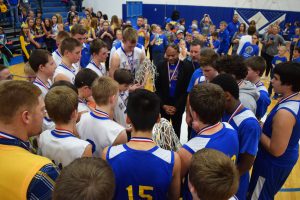 After the IESA Class 8-1A state championship game, players from both St. Mark, Peoria, and St. Michael, Sigel, met on the center of the court for a group prayer. St. Mark representatives presented their opponents with medals and holy cards of their school’s patron, St. Michael the Archangel. Leading the teams in a “Hail Mary” is Father Sunder Ery, pastor of St. Michael Parish and school superintendent. (The Catholic Post/Tom Dermody)

More kindness toward opponents took place on Feb. 15, this time following the Class 8-1A state basketball championship game. After dropping the contest to St. Michael School of Sigel, coaches from St. Mark School in Peoria called both teams to the center of the court for a joint prayer. Prior to the prayer, St. Mark representatives presented each member of the opposing team with a medal and holy card of St. Michael the Archangel, their school’s patron.

Finally, after Corpus Christi Catholic School in Bloomington ended its successful season by dropping a state championship basketball game to Decatur Robertson on Feb. 8, interim principal Judy Clark shared the news online by saying that while the team lost, “we played like Saints” — the school’s sports team nickname.

We couldn’t be more proud of these Catholic school athletes if they were on a podium this week in South Korea. — Thomas J. Dermody