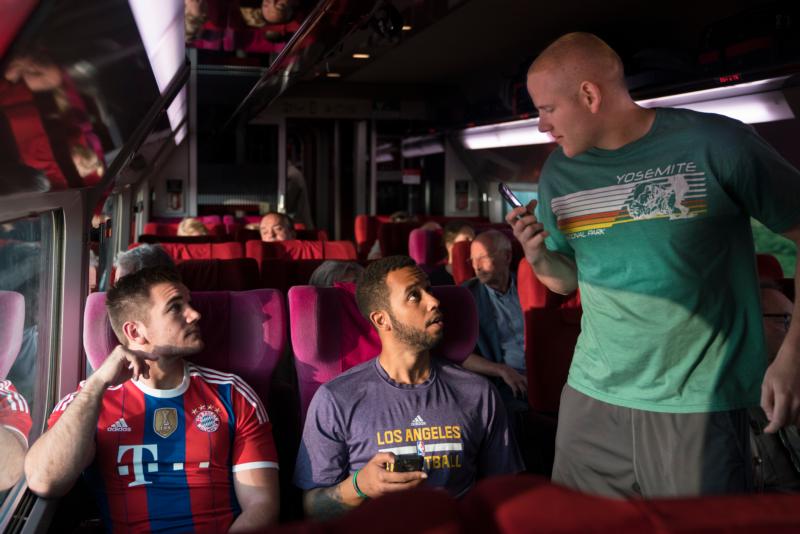 Uneven drama recounting the circumstances that led up to the thwarting, in August 2015, of a terrorist attack and potential massacre on the train of the title.

Traveling from Amsterdam to the French capital as tourists, a trio of Americans (Anthony Sadler, Alek Skarlatos and Spencer Stone all portraying themselves), two of them with military backgrounds, courageously stop a heavily armed jihadist bent on a shooting spree among the captive passengers. The portion of director Clint Eastwood’s film devoted to this headline grabbing incident is taut and compelling.

But, in adapting the three friends’ book about their exploit and their lives before it, written with Jeffrey E. Stern, screenwriter Dorothy Blyskal fails to evoke much interest in the lads’ humdrum childhoods and fitful careers. More honorable than entertaining, their faith-friendly story does emphasize self-sacrificing heroism and the potential of ordinary people to achieve great things.

Gunplay and nonlethal violence, a sequence involving gory wounds, a bit of sexual humor, a couple of uses of profanity and a pair of milder oaths, numerous crude and crass terms. The Catholic News Service classification is A-III — adults. The Motion Picture Association of America rating is PG-13 — parents strongly cautioned. Some material may be inappropriate for children under 13.