ROCK ISLAND — Before the Jordan Catholic School community wrapped up Catholic Schools Week, they received a special visit from Gov. Bruce Rauner, who thanked the teachers for their hard work and expressed his support for tax credit scholarships.

The Invest in Kids Act, which he signed into law on Aug. 31, 2017, provides tax credits for donors who support non-public school scholarships for low-income students. The program can take up to $100 million in donations from individuals, who may designate which school benefits from their gift, and corporations. 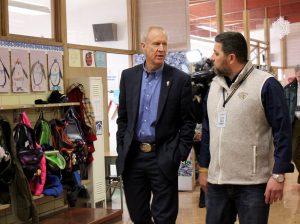 Gov. Bruce Rauner talks with Jacob Smithers, principal of Jordan Catholic School in Rock Island, as he prepares to tour the technology and science labs. (The Catholic Post/Jennifer Willems)

Gov. Rauner said that even though the program is relatively new, about $45 million has been raised so far.

“The reality is, high-income parents can choose a school, but often low-income parents can’t. They don’t have the resources to. That’s really not fair,” Gov. Rauner told the press after he toured Jordan’s technology lab and science lab and took questions from the students at an assembly in the school gym.

“Education should be more about equity and fairness,” he said. “Regardless of where a parent lives, regardless of what their income is, they should be able to have choices just like higher-income families.”

Praising Jordan Catholic, the governor said he wants to have “wonderful schools” in every neighborhood, in every community.

“I want to make sure we support every type of education so parents can choose what’s best for their child,” he said, noting that this includes charter schools, Catholic schools, religious schools and homeschooling, as well as public schools.

Initial scholarships would be granted for the 2018-19 school year. The program will continue for at least five years.

The application process for these scholarships impacting families in the Diocese of Peoria stalled almost immediately, however, when the website for Empower Illinois crashed Jan. 31. It is estimated that as many as 24,000 people tried to access the site when it went live at noon. 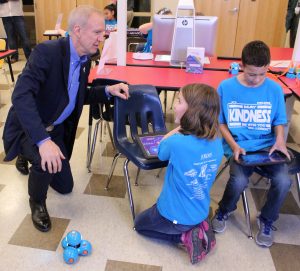 During his tour of Travis Eygaboard’s technology lab at Jordan Catholic School in Rock Island, Gov. Bruce Rauner gets a lesson in how to make robots move from fourth-graders Anne Averill and Kyler Owens. (The Catholic Post/Jennifer Willems)

Empower Illinois is the scholarship granting organization that is receiving the donations and verifying eligibility of applicants from Catholic schools in the diocese.

Dr. Sharon Weiss, superintendent of Catholic schools for the Diocese of Peoria, said Empower Illinois officials had contacted her, acknowledged that they were at fault, and apologized for what occurred.

In a statement issued Feb. 6, Empower Illinois said they had identified the technology problems that caused the application to fail and were in the process of “solidifying solutions” so it wouldn’t happen again.

“As a result, we are likely still at least two weeks away from making the application available,” the Empower Illinois statement said. “We do not have an exact date but we will provide at least one week notice before the application reopens.”

Empower Illinois added that “this is a delay only and does not impact the availability of scholarships from us or other (scholarship granting organizations) in the state.”

Weiss said she understands that technology fails, but is still disappointed.

“We worked so hard with the schools and they’ve done everything we’ve asked them to do,” she told The Catholic Post,

That includes soliciting donors, opening up their computer labs for families who do not have that access at home, and providing translators, she said.

“I called all of the families who were on free and reduced lunch or had received Spalding scholarships,” she said, referring to the financial assistance offered through the John Lancaster Spalding endowment fund that was established as a result of the diocese’s Rooted in Faith capital campaign. “I spent the day leaving messages, talking to them, reminding them that the application process would be up and running Jan. 31 at noon.” 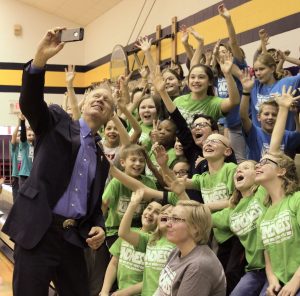 Gov. Bruce Rauner poses for a selfie with students at Jordan Catholic School in Rock Island before an assembly begins Feb. 2. During the Catholic Schools Week visit he led not one but two rounds of applause for the teachers and took questions from the students. (The Catholic Post/Jennifer Willems)

On that day, Leonard invited one parent to come in and apply just to see how long it would take.

“That’s when we got the red flag, without any notification, at 12:30 that the site was down. We scanned her information,” she said. The same thing happened with three families who came in after school to work through the process with the help of a teacher who speaks Spanish.

“That’s the best we could do, along with everyone around us, is have a file ready to scan when they apply,” Leonard said, promising to “hang my shingle out” again when the Empower Illinois website is ready.

Part of the frustration, she said, is that families either took off from work or went in late in order to apply.

Another concern is that Our Lady of Grace is in one of 15 “focus districts” located across the Diocese of Peoria. These are public school districts that have a school where academic performance or graduation levels are below standards set by the Illinois State Board of Education.

Weiss said these focus districts, which are supposed to receive priority when the tax credit scholarships are awarded, generally have families that would fall under the poverty level, too.

In information she sent to the pastors and principals, Weiss explained that none of the schools have received a link to the portal for the Empower Illinois website at this time and won’t until it has been tested and is ready to reopen.

And because of concerns that applications were to be processed on a “first-come, first-served” basis, Empower Illinois will make certain the “playing field is level,” she said.

Taking a “glass half full” approach, Weiss told The Post that she hopes donors will see what has happened and be inspired to take action — not only earning a tax credit of 75 percent of their donation, but helping children who want to come to a Catholic school and need help to do it.

For more information about the tax credit scholarships, visit the page established at cdop.org.