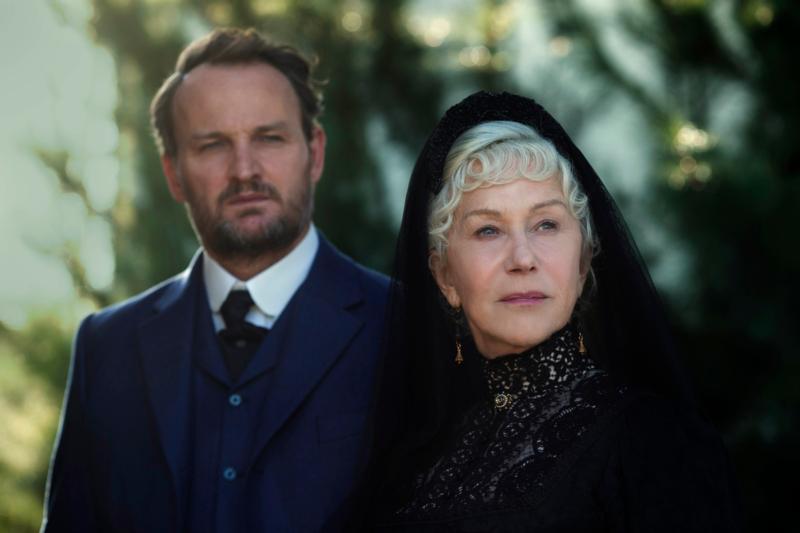 Jason Clarke and Helen Mirren star in a scene from the movie "Winchester." The Catholic News Service classification is A-II -- adults and adolescents. (CNS/CBS Films and Lionsgate)

Horror dud riffing on the real-life mania that compelled fabulously wealthy arms heiress Sarah Winchester (Helen Mirren) to maintain constant construction on the San Jose, California, house she lived in over a period of nearly four decades, a project that ended only with her death. Commissioned by the board of directors of the Winchester Repeating Arms Co. to assess their majority shareholder’s state of mental health, a doctor (Jason Clarke) with a turbulent past of his own discovers that Sarah’s claim that she and her family, here represented by her niece (Sarah Snook) and young grandnephew (Finn Scicluna-O’Prey), are cursed is well-founded in eerie fact.

A mash-up of the haunted house, angry ghost and possessed kid subgenres, co-directors and brothers Michael and Peter Spierig’s film has a little of everything, but none of it works. The script’s peaceable theme — the spirits bugging Sarah were all killed by Winchester guns — is certainly in keeping with Gospel values, although aspects of the physician’s lifestyle, only hinted at, are clearly contrary to them.

Occult themes, gunplay and other stylized violence with little gore, drug use, implications of promiscuity and possible group sex involving prostitutes, a couple of profanities, a milder oath, at least one crass term. The Catholic News Service classification is A-III — adults. The Motion Picture Association of America rating is PG-13 — parents strongly cautioned. Some material may be inappropriate for children under 13.