“Year with the Saint John’s Bible” opens; masterpiece on display in Bloomington 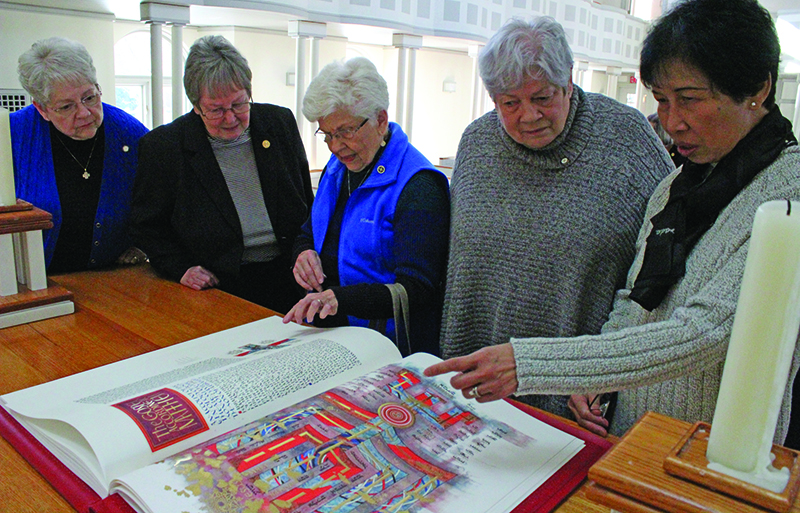 Taking in the depiction of the genealogy of Jesus at the beginning of Matthew’s Gospel in the Heritage Edition of the Saint John’s Bible are (from left) Toni Wilken of Lexington, Sister Sandra Brunenn, OSB, prioress of St. Mary Monastery in Rock Island, and Carolyn Gray, Sharon McNamara and Feli Sebastian, all of Bloomington. (The Catholic Post/Jennifer Willems)

BLOOMINGTON — To say that the Saint John’s Bible is an artistic masterpiece would be true, but that isn’t why it was created.

“The main reason we did this project is to remind people that the Bible, by its very nature, is communal. It’s meant to be shared,” said Tim Ternes, director of the Saint John’s Bible at the Hill Museum and Manuscript Library at Saint John’s University in Collegeville, Minnesota.

The Benedictine community at Saint John’s Abbey sponsored the project, which is the first hand-illuminated, handwritten Bible produced in 500 years. It took 23 artists and calligraphers 15 years to complete the seven volumes. 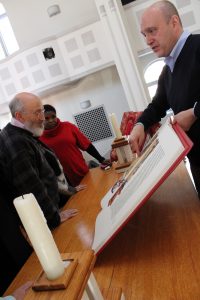 “It’s not a new word translation,” he said, noting that they used the New Revised Standard Version of the Bible. “It is a new visual translation, because the Saint John’s Bible works to bring the Scriptures to life in a different way for a new culture, a new millennium, a new world.”

Throughout 2018, two volumes of the Heritage Edition of the Saint John’s Bible will help people in central Illinois enter into that dialogue with Scripture, art and one another at Illinois Wesleyan University. From January through June, “Gospels & Acts” will be displayed at the Ames Library on campus. For the last six months of the year, “Pentateuch” will be exhibited.

To initiate the “Year with the Saint John’s Bible,” there was an ecumenical blessing service on Jan. 18 that included remarks by Sister Sandra Brunenn, OSB, prioress of St. Mary Monastery in Rock Island, and Rev. Elyse Nelson Winger, chaplain at Illinois Wesleyan. Father Greg Nelson, pastor of St. Mary Parish in Bloomington, and Msgr. Doug Hennessy, a senior priest of the Diocese of Peoria living in Bloomington, also took part in the prayer service.

Ternes presented talks to help people understand how the Saint John’s Bible was created and give his listeners some idea of what they might see as they began to immerse themselves in it. There are DNA strands in the genealogy of Jesus at the beginning of the Gospel according to Matthew, for example, and the Twin Towers destroyed in New York on 9/11 invite readers of the Gospel of Luke to consider how to forgive the unforgivable.

Sister Sandra said her heart was filled with joy to be in the presence of the Heritage Edition of the Saint John’s Bible, which is printed on American cotton paper, illuminated with gold and silver treatments, and hand-stitched and bound in Italian calfskin leather. It is the same dimensions as the original — 2 feet high and 3 feet long.

“From the beginning the spirit of St. Benedict has infused the project,” she said. “Our Benedictine tradition has always placed primacy on the Holy Scriptures. Historically, monks were the early calligraphers, illuminators and preservers of the sacred texts.”

It is appropriate, then, that Benedictines are continuing that tradition, using the technology and vision of this day, she said.

“In the spirit of St. Benedict, the Scriptures are not simply to be revered or studied or even learned by heart,” Sister Sandra continued. “Rather, they are to be prayed with, day in and day out.”

The Saint John’s Bible, with its beautiful calligraphy and illuminations, invites people into the practice of lectio divina or holy reading, and visio divina, holy seeing, she said. 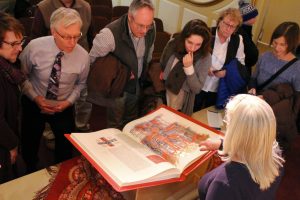 After hearing an introduction to the Saint John’s Bible on Jan. 18 at Illinois Wesleyan University in Bloomington, people come forward for a closer look at the “Gospels&Acts” volume of the Heritage Edition of the Bible. Turning the pages for them is Madeleine Callahan, a Benedictine Oblate and newly trained docent. (The Catholic Post/Jennifer Willems)

“The various illuminations are not simply illustrations,” she explained, “but are spiritual meditations on the text and they spark our imaginations and invite us to see the Scriptures themselves in new ways.”

Sister Sandra encouraged people, as they spend time with various passages, to notice how the images illuminate the word and the word illuminates the images.

“The two work together to open one’s heart and mind to God’s transforming presence right now,” she said.

Sister Sandra also noted how the scholars, theologians, historians and artists who worked on the project incorporated the Benedictine values of hospitality, conversion of life, and justice for God’s people into what is depicted. And those who look carefully will see a small cross in the margin to indicate a Bible verse that is found in the Rule of St. Benedict — there are 126 of them.

“These are some of the reasons the Benedictine Oblates of St. Mary Monastery are eager to share this Bible with the larger community,” Sister Sandra said. “We see it as a gift of our tradition to be shared as widely and deeply as we can imagine.”

Benedictine Oblates are Christians who associate themselves with a particular monastery and live the monastic principles of prayer, lectio divina, work, hospitality, stewardship and simplicity as their circumstances allow. Several of them in the Bloomington-Normal area have been working with Rev. Nelson Winger to bring the Heritage Edition to central Illinois and have trained as docents so they can take the volumes to schools, organizations, and faith communities.

Chief among them is local coordinator Madeleine Callahan, who has taught at Illinois Wesleyan University. Her husband, Christopher, is a French professor there and they have been Oblates for more than 20 years.

Rev. Nelson Winger said Illinois Wesleyan, through the Multifaith Fund, provided the financial resources to make the “Year with the Saint John’s Bible” possible, but it wouldn’t be happening without the community commitment that the Benedictine Oblates are bringing to the effort.

She said she has been excited to bring this program to the Illinois Wesleyan campus and the Bloomington-Normal community.

“It’s a product of incredible creativity and collaboration, innovation and critical thinking, and compassion,” she said in her remarks at the prayer service. “It is informed by the Benedictine traditions of hospitality and justice — these are shared values across faith traditions and seeking out and celebrating those shared values.”

Programming is still being developed for the Heritage Edition’s visit. She said information about upcoming events and how to schedule time with the volumes will be available at iwu.edu/chaplain. People may also contact her at chaplain@iwu.edu or (309) 556-3179.