There is ‘space for God’ in new chapel, hearts at St. Malachy School, Rantoul 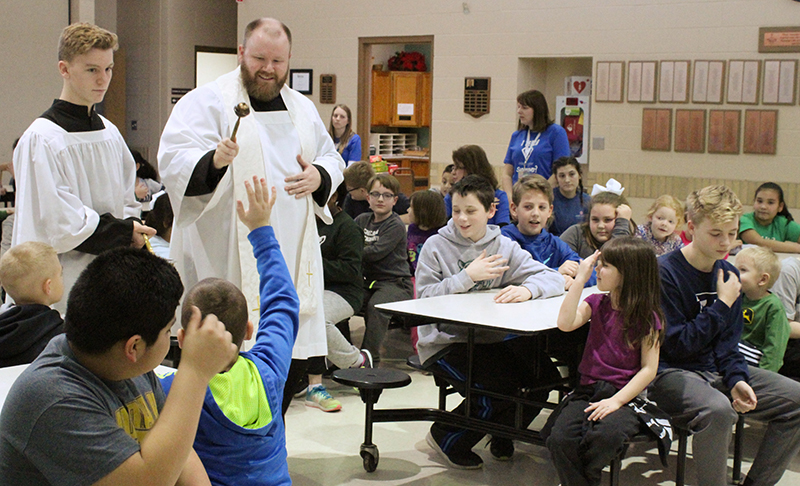 Father Joel Phelps blesses St. Malachy School in Rantoul and its students, faculty, and staff after dedicating its new chapel room in this 2018 file photo. (The Catholic Post/Jennifer Willems)

RANTOUL — Prayer is part of what makes any Catholic school special and as Catholic Schools Week began, St. Malachy School made certain it always would be by blessing its new chapel room. The patron for the new space is St. Peregrine.

During the ceremony, which took the students and teachers throughout the building as each classroom was sprinkled with holy water, Father Joel Phelps also dedicated the school library to St. Catherine of Siena, the computer lab to St. Juan Diego, and the science lab to St. Albert the Great. St. Teresa of Kolkata, whose protection had been sought for the preschool, became the official patron saint of the Tiger Cub Academy. 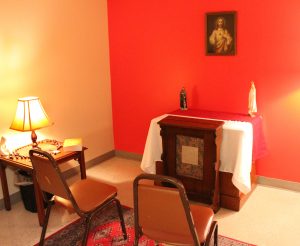 The new chapel is “a spot in the school that could be used for any number of things, but we’re going to make it for prayer,” said Father Phelps.

Before he blessed the chapel, Father Phelps said that while it will be used for different things, its primary purpose is to serve as a place of prayer.

“It’s a reminder to us that it’s a special thing we do here — we pray,” he said. “We have space for God, both in our heart and in our building.”

Not long after the blessing and dedication were completed, Patti Worthington was already helping the sixth grade religion class familiarize itself with various aspects of the room, including the kneeler, a small altar with statues of Mary and St. Peregrine, patron saint of those with cancer, two chairs for prayer and meditation, and resources like the Bible, rosaries, and some prayer books.

“Part of what’s significant to me, is it’s a spot in the school that could be used for any number of things, but we’re going to make it for prayer,” Father Phelps told The Catholic Post.

The new chapel, which is on the second floor amid the junior high classrooms, library and labs, had housed a copier and paper. Father Phelps said it was worth the “little sacrifice” to foster the spiritual life of the students and teachers, as well as their mental development and physical health. 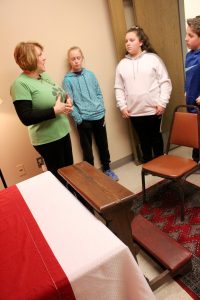 Patti Worthington answers questions about the new chapel for her sixth grade religion class after the blessing on Jan. 29. (The Catholic Post/Jennifer Willems)

They chose a neutral cream color for three walls of the room, but the dominant wall is painted a deep red in honor of the Sacred Heart of Jesus. That is the image that hangs over the small altar.

The Blessed Sacrament will not be reserved in the chapel at this time. Father Phelps said he’s keeping it simple for now and looks forward to seeing what Stacie Gianessi, principal, and the teachers do with the space.

“Our intention is not to replace the church,” Gianessi said, noting that they would continue to go to the church for First Friday adoration and school Masses.

There are times when teachers and students — and the principal — just need to step away and pray, however. “If there’s a chapel it will make it easier for people to do that,” she said.

Even though it is located in the hallway, the room provides a quiet place for students to talk with Father Phelps when they want, she added.

“It’s exciting,” Gianessi said. “The High School of Saint Thomas More in Champaign has a chapel. We have heard . . . a lot of positive reports on how that chapel has really helped spiritual growth throughout the building.”