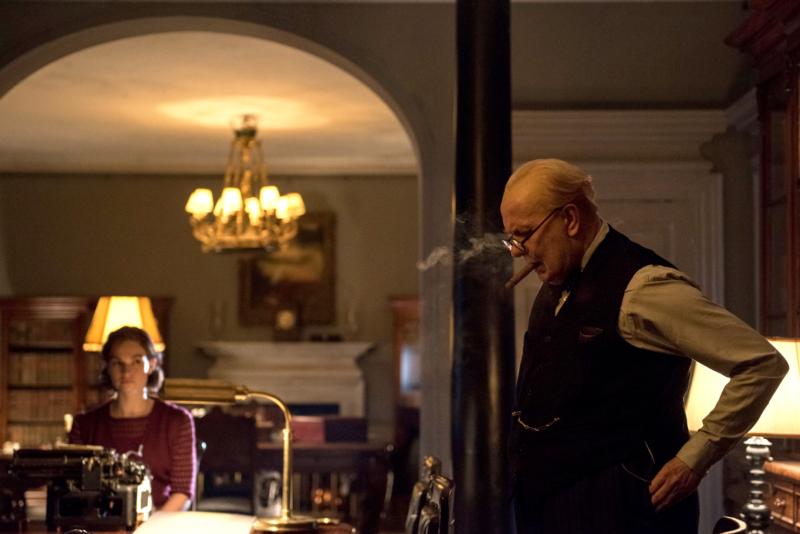 Lily James and Gary Oldman star in a scene from the movie "Darkest Hour." The Catholic News Service classification is A-II -- adults and adolescents. (CNS/Focus Features)

Churchill was 65 years old and in the twilight of his political career when he was tapped by King George VI (Ben Mendelsohn) to lead a coalition government in May 1940. The war was going badly for the Allies, and Nazi Germany was marching into Belgium and France, threatening an invasion of Britain. Churchill succeeds the feckless Neville Chamberlain (Ronald Pickup), whose policy of appeasement with Germany has left Britain woefully unprepared for war.

But Chamberlain enjoys the king’s favor, as does the politically ambitious Viscount Halifax (Stephen Dillane). Together, the trio schemes to disgrace Churchill and put Halifax in power. Encouraged by his faithful wife, Clementine (Kristin Scott Thomas), Churchill convinces his skeptical colleagues to fight and rallies the nation.

Although some liberties are taken with the facts, the film offers an important history lesson for young and old about a time when statesmanship mattered most.

Brief scenes of wartime violence and some mature themes. The Catholic News Service classification is A-II — adults and adolescents. The Motion Picture Association of America rating is PG-13 — parents strongly cautioned. Some material may be inappropriate for children under 13.