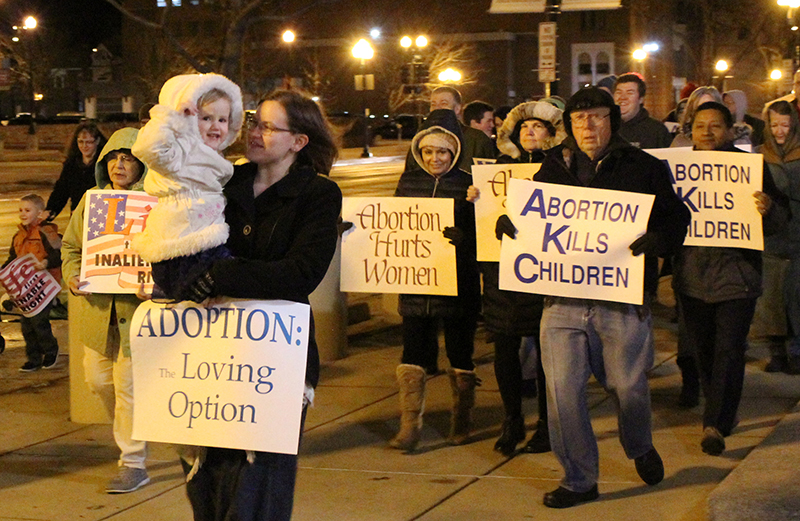 Little Alexis Ryken of Pekin is taking her first pro-life walk around the Federal Courthouse in Peoria in the arms of her big sister Ashly. The walk preceded the Sanctity of Human Life Rally sponsored by Central Illinois Right to Life on Jan. 22. (The Catholic Post/Jennifer Willems)

Jason Jones didn’t know abortion was legal when he found out he was going to be a father two days shy of his 17th birthday. Once the shock of the unplanned pregnancy passed, he made plans with his girlfriend, Katie, and started thinking about what he wanted to give this child.

That dream was cut short when the “secret” was discovered by her parents and made to disappear. After the forced abortion, Katie was told the baby was a girl, whom they named Jessica. 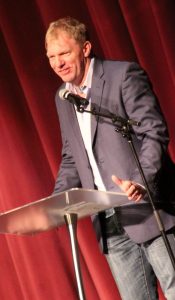 In a presentation filled with passion, heartbreak and humor, Jason Jones shared his journey with the pro-life movement and his conviction that victory is on the horizon. His keynote address was the centerpiece of the Sanctity of Human Life Rally, sponsored by Central Illinois Right to Life, on Jan. 22. (The Catholic Post/Jennifer Willems)

“I wish the whole world could see abortion the way that this uneducated, unchurched, high school dropout from the South Side of Chicago saw abortion — and the way I still see it — as unthinkable, as unspeakable, as unimaginably evil,” Jones told those gathered at Riverside Community Church in Peoria for the Sanctity of Human Life Rally on Jan. 22.

The executive producer of award-winning pro-life films like “Bella” and “Crescendo,” Jones said the heartbreak of losing Jessica, the child he was so excited about, was the beginning of his involvement in the pro-life movement.

“Katie, I promise you if it takes me the rest of my life, I’m going to end abortion for my daughter,” he told her as she sobbed.

“We are so close. We are so close,” he said at the rally, sponsored annually by Central Illinois Right to Life. “We need to change the culture, but we also have to remember how our faith is involved in this.”

An atheist for the first 30 years of his life, Jones has been Catholic for 15 years and asked his listeners to think of themselves not as anti-abortion or pro-life, but as “truth-about-the-human-person activists.”

“There’s no ground for our vision of the human person separated from the truth that we are made in the image and likeness of God. That is the source of our incomparable dignity, beauty and worth,” he said. “That is our message and we should never, ever, be embarrassed by that message.”

One of the people who has proclaimed that message in a prayerful, persistent way for 30 years is Sister Mary Jo Yutt, a member of the Sisters of St. Francis of the Immaculate Conception. For her witness outside the abortion facility on North University Street in Peoria, she received the first Horton Award from Central Illinois Right to Life. 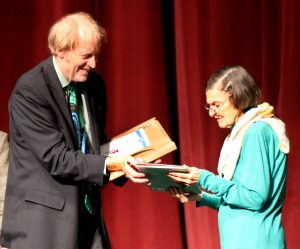 Dan Smith, a member of the Central Illinois Right to Life Board of Directors, presents the first Horton Award to Sister Mary Jo Yutt, OSF, for her “commitment to unborn children.” She has prayed outside Peoria abortion facilities for 30 years. (The Catholic Post/Jennifer Willems)

Named after the character from Dr. Seuss’s “Horton Hatches the Egg,” the award was presented for her “faithful commitment to unborn children.”

After calling Sister Mary Jo to the stage, board member Dan Smith praised her by adapting a quote from the popular book: “She meant what she said and she said what she meant. To the least she’s faithful 100 percent.” He invited people to sign the book at the reception that followed the rally.

She asked them to continue praying for new mothers and those who are mothers again. “Our prayers are powerful and they help,” she said.

Sheila Ludolph of the Women’s Care Center of Peoria, located next to Whole Woman’s Health where abortions are performed, went a step further.

“We’re so grateful for your support as we enter into our fifth year of being open and we couldn’t have done it without the prayers and support you have given us,” she said.

The number of women they’ve seen has increased so much that the center has added staff. Gov. Bruce Rauner’s decision to provide funding with Medicaid dollars for women seeking abortions has also brought women to their doors seeking information, according to Ludolph.

Connie McClure said the good news is that if the Women’s Care Center can get women to come in and provide them with good information, oftentimes they do decide on life.

“We hope that eventually we get to a point where every woman that comes in to the Women’s Care Center is only coming for parenting classes,” she said.

Also speaking to rally participants were Julie Philyaw of the Women’s Pregnancy Center, an arm of Peoria Rescue Mission, and Jason Season of 40 Days for Life. 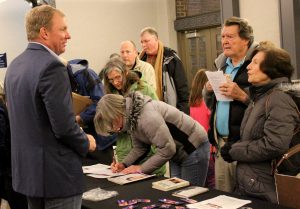 Jason Jones talks with Carol and Roy Endres after his presentation at the Sanctity of Human Life Rally at Riverside Community Church in Peoria on Jan. 22. The film maker, producer and human rights activist, also signed copies of his book, “The Race to Save Our Century: Five Core Principles to Promote Peace, Freedom, and a Culture of Life.” (The Catholic Post/Jennifer Willems)

Philyaw reminded them that life decisions require life support. She encouraged church leaders and members to talk about abortion and let their people know that support is available and forgiveness is possible.

Being on a prayer team or serving as client advocates is a good start, Philyaw said, adding that more men are needed to talk with young men who want to be good fathers.

To project the positive message they want to share, the Women’s Pregnancy Center will be renamed Empower Life Center in the weeks to come, she said.

Season said the peaceful prayer vigils that are the basis of 40 Days for Life have been held each fall in central Illinois for the last 10 years. Nationally they take place in 741 cities and 47 nations, and he said close to 14,000 babies have been saved as a result.

Applause followed his news that 94 abortion clinics have been shut down.

“Let’s continue to rally together, with the Lord, in the spirit of unity and spirit of love, praying and believing that God will end abortion,” Season said.

“The pregnancy center network in the United States is the biggest secret in the world,” said Jones, who was present at the first-ever 40 Days for Life with David Bereit and Shawn Carney in Texas.

“You know, a lot of places I go these days there are no abortion clinics, not one. But I’ve never opened up the Yellow Pages in this country and not found a pro-life pregnancy center,” he said. “We’re everywhere.”

Jones had tried to establish himself in the Army when he found out Katie was pregnant and after basic training in Georgia he was stationed in Hawaii, where he lives today with his wife and seven children. He has tried to make good on his promise to end abortion by working as executive director of Hawaii Right to Life and getting involved in politics, starting with an effort to get partial-birth abortion banned in Hawaii. 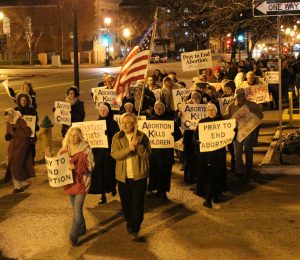 Ken Goins of Central Illinois Right to Life carries the American flag as he leads pro-life advocates in a walk around the Federal Courthouse in Peoria prior to the Sanctity of Human Life Rally in Peoria on Jan. 22. (The Catholic Post/Jennifer Willems)

When he became frustrated by slow progress or no progress at all, the one-time atheist challenged God to raise up rich, famous and powerful people to fight abortion that he could stand with — and God did.

He celebrated the 10th anniversary of the theatrical release of “Bella” in October and said they hoped to learn the name of one baby who was alive as a result.

“What we were most proud of is that we have received over 1,000 letters from women that were scheduled to have an abortion, saw ‘Bella,’ kept their baby and wrote us about it,” Jones told them.

People of faith must never despair, he said, pointing to an increasing number of movies and songs with messages about the dignity and worth of the human person. Jones also reminded them that the President of the United States broadcast live for the first time to the March for Life in Washington, D.C., on Jan. 19, while the Vice President invited members of Students for Life of America to a special reception the night before.

A fan of Venerable Archbishop Fulton J. Sheen, Jones asked people to consider what one man from Peoria did for the world and challenged them to do the same.

“If just those of us in this room corresponded our life to the overwhelming grace that God has given us . . . we would see the culture of death transform into the culture of life in an instant,” Jones said.

During his stop in Peoria, Jones also brought his pro-life message to the students at Peoria Notre Dame High School.

As is tradition, the Sanctity of Human Life Rally started with a walk around the nearby Federal Courthouse.