Father Sebastian Tumusiime returning to Africa; served in diocese since 2008 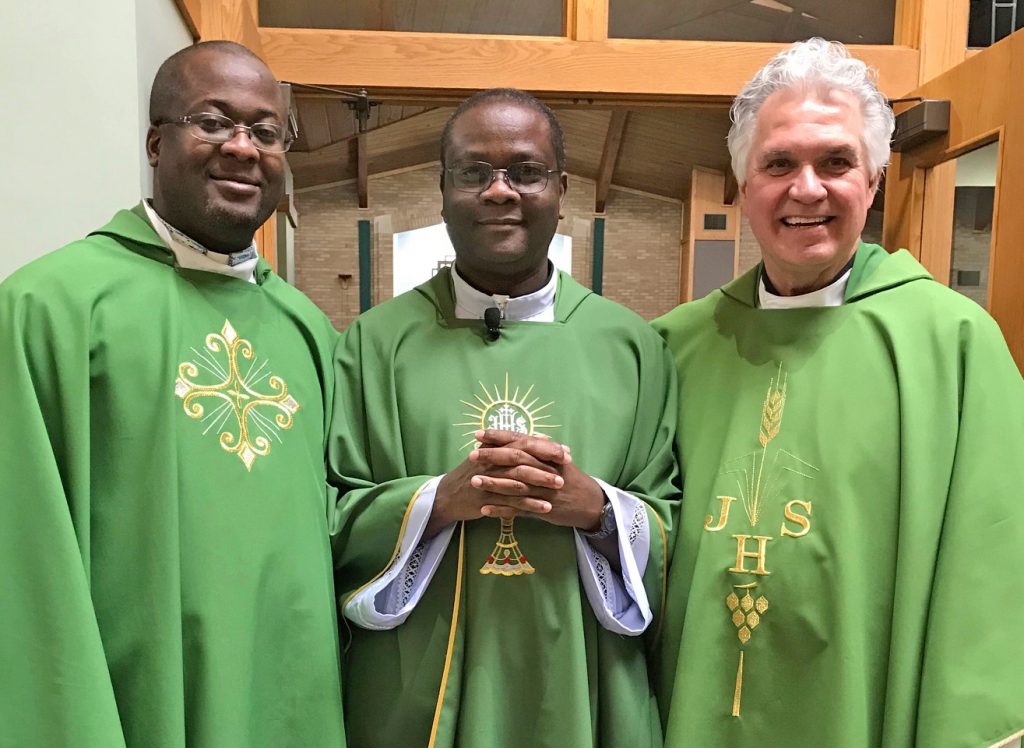 MACOMB — When Father Sebastian Tumusiime returns home to western Uganda later this month, he won’t miss the cold weather and snow. The people of the Diocese of Peoria are another story.

“I have been impressed with the faith and the kindness of the people of the Midwest,” he said. “They embrace the faith and are active in their church. They are kind and welcoming to people from the outside.”

Father Tumusiime has been involved in parish and Tribunal ministry in central Illinois since 2008, when he assisted at Christ the King Church in Moline during his summer breaks from St. Paul University in Ottawa, Canada. He has been studying canon law and received his doctorate last June.

The Moline faith community thanked him for his service during a Mass and reception at Christ the King last Sunday.

The celebrations continue with receptions after all the Masses this weekend, Jan. 20-21, at St. Paul Church in Macomb. Father Tumusiime has served there and at St. Rose in Rushville since June. The Rushville faith community will thank him after the 8:30 a.m. Mass next Sunday, Jan. 28.

He will begin his journey home to the Archdiocese of Mbarara, Uganda, on Jan. 29.

During his time in the Diocese of Peoria, Father Tumusiime also ministered briefly at St. Francis in Kewanee and the Hancock County Catholic parishes before being named the parochial vicar at Sacred Heart in Annawan in 2010 and then administrator in Annawan, St. Patrick in Sheffield, and St. Mary in Hooppole. While serving in the Marriage Tribunal, he also served as parochial vicar at Sacred Heart in Moline from 2014 to 2015.

In addition to his work at the Macomb and Rushville parishes, Father Tumusiime has been the assistant chaplain at St. Francis of Assisi Catholic Newman Center in Macomb.

His assignment in the Archdiocese of Mbarara is still being determined, but Father Tumusiime anticipates a mixture of parish and Tribunal ministry.

He would enjoy hearing from his friends in central Illinois, who may contact him by email at tumuseba@gmail.com.