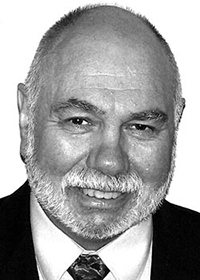 GALESBURG — A Mass of Christian Burial will be offered at 10:30 a.m. on Friday, Jan. 19, at Immaculate Heart of Mary Church here for Deacon Michael B. Mannino, 74, a permanent deacon of the Diocese of Peoria who served at the parish and also as assistant spiritual director of Northwest Cursillo since his ordination in 2007.

Deacon Mannino died at his home with his family by his side during the early morning hours of Tuesday, Jan. 16, 2018, following a long illness.

The rosary was to be prayed at 4 p.m. Thursday at Watson-Thomas Funeral Home in Galesburg with visitation following from 5 to 8 p.m. Msgr. Ernest Pizzamiglio is the scheduled principal celebrant of the funeral Mass, with burial to follow in St. Joseph Cemetery.

Born April 7, 1943, in Chicago to Carl and Nancy Ann (Ruvolo) Mannino, he earned bachelor and master’s degrees from Northern Illinois University and a juris doctorate from the John Marshall Law School in Chicago. He clerked for Iowa Supreme Court Justice M.L. “Larry” Mason, and in 1978 became executive director of West Central Illinois Legal Assistance, where he served for 21 years. He was in private practice from 2001 to 2013.

He married Mary (Molly) Martin on Nov. 4, 1967, at St. John of the Cross Church in Western Springs. They recently observed their 50th wedding anniversary.

Deacon Mannino was among 29 men ordained to the permanent diaconate by Bishop Daniel R. Jenky, CSC, on May 19, 2007, at St. Mary’s Cathedral in Peoria. He was granted senior status last year.

Memorials may be directed to the Northwest Area Cursillo or Immaculate Heart of Mary Parish.