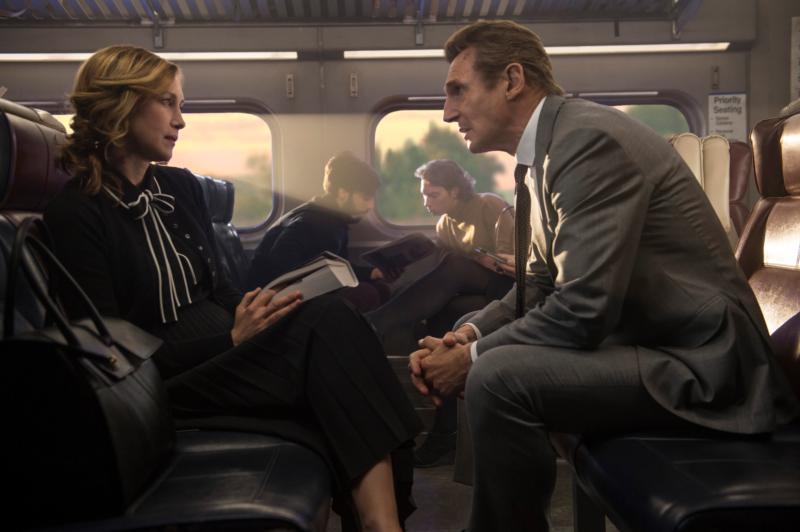 Vera Farmiga and Liam Neeson star in a scene from the movie "The Commuter." The Catholic News Service classification is A-III -- adults. (CNS/Lionsgate)

Lively action sequences help mask the muddled premise of this Liam Neeson vehicle. He plays a police officer-turned-insurance-salesman who, on the very day he is let go from the latter job, finds his train trip home to the suburbs transformed into a test of character when a stranger (Vera Farmiga) offers him a large sum to identify one of his fellow passengers on the basis of a few scanty clues. It soon becomes apparent that she is not on the side of the angels and that her proposal is as much blackmail as bargain. With his wife (Elizabeth McGovern) and son (Dean-Charles Chapman) in danger, he turns for help to a friend and fellow cop (Patrick Wilson) who is still on the force but must largely fend for himself as he pursues his frantic search.

Director Jaume Collet-Serra’s generally efficient thriller does present its protagonist with a fundamental moral dilemma. Yet the logical shortcomings of its story blunt the impact of its perfectly respectable ethical message.

Much brawling and some lethal violence with brief gore, a scene implying use of pornography, about a dozen profanities, a couple of rough and several crude terms, an obscene gesture. The Catholic News Service classification is A-III — adults. The Motion Picture Association of America rating is PG-13 — parents strongly cautioned. Some material may be inappropriate for children under 13.