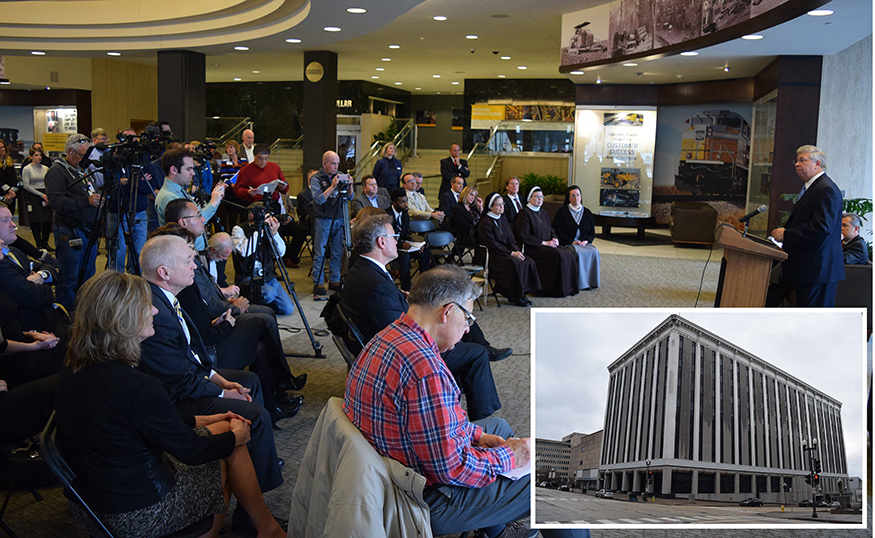 OSF HealthCare will establish a new Ministry Headquarters in downtown Peoria through a partnership with Caterpillar Inc. announced Jan. 11.

Plans call for OSF HealthCare to restore a century-old, nine-story iconic property at 124 SW Adams St. and eventually relocate more than 700 employees there. The now vacant structure — a prominent retail establishment for most of the 20th century under the names Block & Kuhl and later Carson Pirie Scott — more recently has been known as the Chase building and was home to banks and law firms. 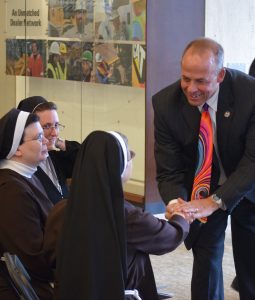 Peoria Mayor Jim Ardis greets Sister Judith Ann Duvall, major superior of The Sisters of the Third Order of St. Francis and chairperson of the OSF HealthCare Board of Directors, prior to the Jan. 11 press conference. (The Catholic Post/Tom Dermody)

In addition to the Chase building, Caterpillar is donating the Peoria Professional Building, an adjacent parking deck and $3 million to OSF HealthCare for further development of the block. The world’s largest construction equipment manufacturer had initially acquired properties on the full city block, located across Main Street from its Administration Building, for its own new headquarters until changing plans last year.

OSF HealthCare, Caterpillar, and city officials praised the new project as beneficial to all involved during a morning press conference in the lobby of Caterpillar’s administration building.

In an opening prayer, Sister Judith Ann Duvall, OSF, asked for God’s blessings “as our Sisters and OSF HealthCare return to our roots where we began just seven blocks from this site more than 140 years ago.” Sister Judith Ann, who is major superior of The Sisters of the Third Order of St. Francis and chairperson of the OSF HealthCare Board of Directors, predicted the project “will have a significant and positive impact on downtown Peoria.”

That sentiment was echoed by the speakers who followed.

“A GAME CHANGER FOR DOWNTOWN”

Peoria Mayor Jim Ardis said the presence of the OSF HealthCare Ministry Headquarters “really will be a game changer for downtown Peoria.” In addition to the hundreds of construction jobs it will generate during the multi-year renovation, the infusion of 700 additional people working downtown will make the area more “vibrant, active, and energetic.”

“Thank you, Caterpillar. Thank you, OSF,” said Ardis, adding “this is teamwork the way it’s supposed to be done and it’s something all of us should be proud of.”

Bob Sehring, chief executive officer for OSF HealthCare, said that OSF administrative “mission partners” currently work in various locations throughout the city. Bringing them together in one “collaborative space” will benefit the OSF ministry, he said, and is also good news for the city.

Sehring drew applause by thanking Caterpillar for its collaboration, saying many people have been involved and “many more will be involved.” 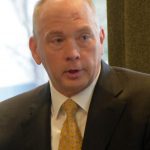 Meanwhile, Brad Halverson of Caterpillar said the company has had a “long and deep relationship with OSF” and praised OSF’s mission, leadership, innovation, and “genuineness.”

“This project is another example of that partnership,” said Halverson, Caterpillar’s group president and chief financial officer, “and we’re very happy to have that partnership and the contributions we can make here today.”

Caterpillar, OSF, and the City of Peoria are working to have the Chase building listed on the National Register of Historic Places as a contributing building within a historic district. Such a designation is essential to the project because it would make the building eligible for Historic Rehabilitation Tax Credits to assist OSF with restoration costs, which are expected to approach $100 million.

Sehring said that while exterior work is needed, the major part of the development will take place on the building’s interior, which now represents “a blank canvas.” The small professional building and parking deck, which do not have historic value, will be razed. OSF and Caterpillar will work together to develop other amenities on the block to benefit both organizations and the city.

Construction is expected to begin by summer and last well into 2019.

OSF HealthCare, owned an operated by The Sisters of the Third Order of St. Francis and headquartered in Peoria, is one of the state’s largest employers, with 19,000 mission partners (employees) in 115 locations. Plans have not been finalized regarding which employees will be relocated to the new Ministry Headquarters.