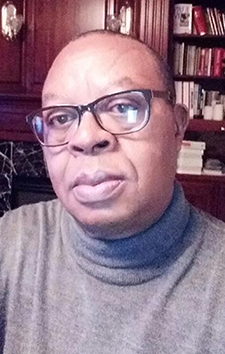 Children fill the pews in African Catholic churches, but in the United States, not so much. That’s according to a priest in residence in the Diocese of Peoria who spent a quarter of a century in the East African country of Rwanda.

Father John Baptist Uwigaba, 58, who survived the 1994 genocide and went on to minister to Catholics in the Kabgayi region for another two decades even after other priests had been killed, believes it is up to the youth to revitalize the faith. And in Rwanda, a country of 5 million Catholics — about half the population — children make up a significant portion of churchgoers.

So it came as a surprise to him when he arrived in November at St. Pius X Church in Rock Island and found a different situation at Mass.

“I could not find youth in the church,” Father Uwigaba said. “I’m happy with the older aged people that come for prayers and come to praise their creator, to thank God and pray in general. But the youth are nowhere to be seen.”

Father Uwigaba, who spent his first two months in residence at St. Pius X and is now at Mary, Our Lady of Peace Church in Orion, shared his concern with The Catholic Post about the future of the church in America.

Father Uwigaba grew up in Uganda to parents devoted to their Catholic faith. They encouraged him to enter the seminary and, he said, he was inspired by the work of a priest who would frequent his village.

“I was impressed by the work they do and their faith,” said Father Uwigaba, who was ordained in 1991.

Rather than serve in his native Uganda, where Catholics make up about 40 percent of the population, Father Uwigaba went to help strengthen the church in neighboring Rwanda, where the political climate in the early 1990s was less stable.

Within a few years, the country collapsed into widespread violence in which members of the ruling ethnic group, the Hutu, began slaughtering the country’s other major ethnic group, the Tutsi, following the assassination of the president, which Hutu officials blamed on Tutsi.

Father Uwigaba served in a village parish near Kabgayi, and it didn’t take long for the terror that had erupted in the capital of Kigali 25 miles northeast to spill into the countryside and infiltrate every community. The terrified young priest heard the calls of “spare no one” come across the Hutu-dominated radio and he fled the country with other refugees.

“I was scared,” he said. “The situation was not so good. I had to run away immediately. It was a very bad situation.”

Some of the priests and nuns who remained in Rwanda in the spring and summer of 1994 were massacred along with at least 800,000 ethnic Tutsi and some Hutu. A few clergy members, however, were accused of being complicit in the deaths, causing Pope Francis to plead for forgiveness from the nation’s leaders earlier this year.

After the situation settled down, Uwigaba returned to his old parish near Kabgayi over his mother’s objections.

“You see the grace of God working in the country. It’s a kind of miracle.” — Father John Baptist Uwigaba, reflecting on life in Rwanda after the genocide of the early 1990s

Rwanda entered a period of reconciliation between the two ethnic groups that lasted two decades. Father Uwigaba said the church assisted in this effort by seeking foreign aid to reconstruct homes and other buildings destroyed during the genocide.

The role of priest as spiritual adviser and counselor to a flock still raw with anxiety and despair was more important than ever. Father Uwigaba said it was at this time he realized the extent of his vocation.

“The bishops were working on this reconciliation program,” he said. “We were feeding the hearts of many. Great progress was made in their Catholic faith. The animosity between the two tribes was not all there anymore. From a spiritual point of view, there has been great progress.”

He sees Rwanda today as a “generally peaceful” and developing country.

“You see the grace of God working in the country,” he said. “It’s a kind of miracle. Compared to surrounding countries, you find it’s progressing even faster.”

After marking 25 years in the priesthood last year, Father Uwigaba was ready for a new pastoral experience. He asked his bishop in Rwanda for a transfer elsewhere and an arrangement was made that brought him to the Peoria Diocese.

What first struck him about Americans was how happy they seemed to meet him.

Surprisingly, the food isn’t much different, though American food seems a lot sweeter to him. He enjoys a good fish or chicken dish and dining at a Chinese or Italian restaurant is similar to restaurants in the Rwandan capital, but with more choices.

“I’m very happy to be here,” he said. “I thank God for this. This is a great nation. I’m grateful to the bishop and the priests that I have met.”