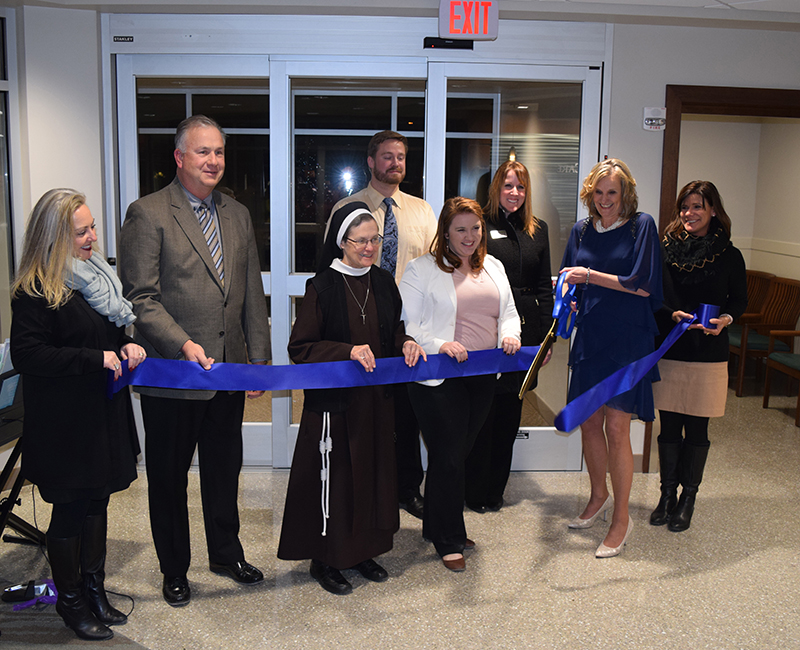 Roxanna Crosser, CEO of the Western Region for OSF HealthCare, cuts a ceremonial ribbon Jan. 4 during a blessing and dedication for the new main entrance and lobby at OSF HealthCare St. Mary Medical Center in Galesburg. She is joined by Sister Judith Ann Duvall, OSF, major superior of The Sisters of the Third Order of St. Francis and chairperson of the OSF HealthCare Board of Directors, Keith Douglass (to Sister Judith Ann's right), chairperson of the Community Advisory Board, and members of the Galesburg Chamber of Commerce including Theresa Mangieri, Tom McIntire, Jessica Linder, Megan Kidwell, and Darcy Thorp. (The Catholic Post/Tom Dermody)

GALESBURG — The blessing of a new main entrance and remodeled lobby at OSF HealthCare St. Mary Medical Center here on Jan. 4 was also an occasion to look to the medical center’s past and future. 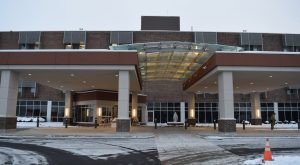 The remodeled main entrance to OSF HealthCare St. Mary Medical Center in Galesburg includes an expansive canopy over the drive-up lane and a new, larger vestibule with glass walls. (The Catholic Post/Tom Dermody)

The past was on display thanks to the contents of a time capsule from the medical center’s 1974 dedication at the Seminary Street location west of Galesburg that was discovered during the recent construction work. The capsule’s “treasures” — including photographs, personal notes, coins, prayer cards and more — were placed on a table for viewing after the blessing ceremony.

The future, meanwhile, was called to mind by speakers at the ceremonies who noted that the $2.2 million main entrance project is one of several building efforts here. Construction continues on a $20 million medical center expansion to enhance surgical, lab, and outpatient services; an $11.5 million renovated and expanded OSF Galesburg clinic was dedicated in late 2016; and plans are under way for a Family Birthing Center.

“This community is invested in OSF St. Mary Medical Center’s campus,” said Sister Judith Ann Duvall, OSF, major superior of The Sisters of the Third Order of St. Francis and chairperson of the OSF HealthCare Board of Directors. “Our response is to protect that investment by replacing infrastructure as needed.”

She said the new entrance area and lobby “will maintain a safe and fully functioning and welcoming environment for our patients and for our visitors.” It includes a canopy that extends over the hospital’s drive-in and drop-off lane, and a new, larger vestibule with glass walls and large airlock to eliminate the effects of wind in the lobby when doors open. 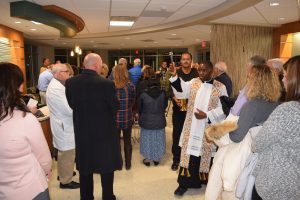 Father Deus-Dedit Byabato, chaplain of OSF HealthCare St. Mary Medical Center in Galesburg, blesses the redesigned main entrance and lobby as well as the large crowd that attended the Jan. 4 dedication ceremony. Behind him is Deacon Make Crummer, director of pastoral care at the medical center. (The Catholic Post/Tom Dermody)

Roxanna Crosser, CEO of OSF HealthCare’s Western Region, noted that a statue of Mary that stood above the former main entrance and dates back to the original hospital — established by the Franciscan Sisters in downtown Galesburg in 1907 — was refurbished and has a prominent place at the new entrance.

“Mary, our patron saint, stays with us today,” said Crosser, who urged all involved at the medical center to “be the face of Christ when we talk, heal, and comfort our patients and families.”

“Let us ask for God’s blessing on all patients and visitors who enter through these doors and this lobby,” said Father Deus-Dedit Byabato, chaplain at OSF HealthCare St. Mary Medical Center for 14 years, before he blessed the new entrance — as well as those who filled the remodeled lobby — with holy water.

Also speaking at the ceremonies was Keith Douglass, chairperson of the medical center’s Community Advisory Board, who in noting the “amazing transformation” of the main entrance also called to mind the positive impact OSF St. Mary has had on the Galesburg community and his family personally.

EDITOR’S NOTE: More photos from the blessing ceremony, as well as the time capsule’s contents, may be viewed on The Catholic Post’s Facebook site.