Festival of Nativities unites community around manger as Christmas approaches 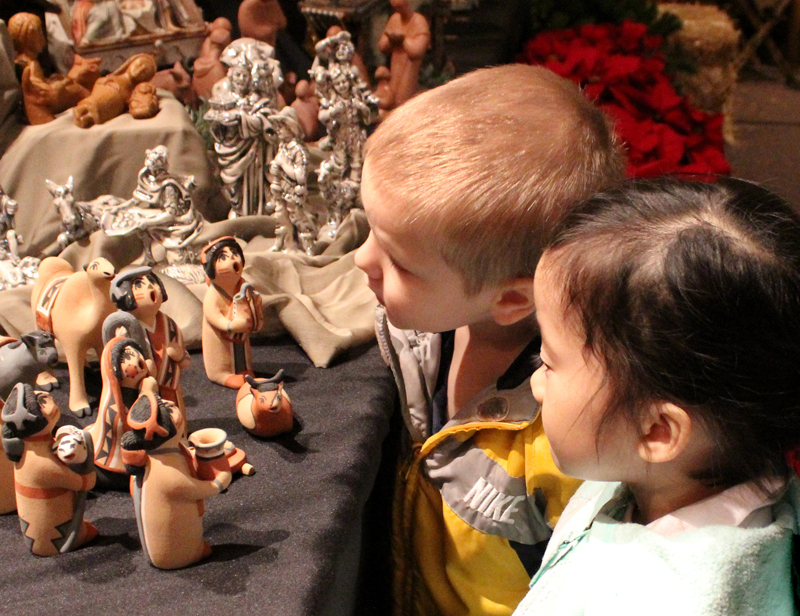 "Come and Behold Him" was the theme for the 2017 Community Festival of Nativities in Peoria and that's exactly what the children from nearby Holy Family School did. The pre-school students in Chery Craft's class were among the first to visit the festival on Dec. 1, with Henry Anderton and Kate Ho taking an interest in one of the Nativities from Msgr. William Watson's private collection. (The Catholic Post/Jennifer Willems)

At a time when so much seems to be dividing humanity, celebrating the birth of Christ is one thing that unites people. That thought is the driving force behind the Community Festival of Nativities in Peoria.

“Come and Behold Him” was the theme for the second annual event, which was sponsored by St. Vincent de Paul Church, All Saints Greek Orthodox Church and the Church of Jesus Christ of Latter-day Saints. It was held at the Mormon church and included nearly 1,000 Nativity scenes from around the world.

Among them were a Fontanini village with 160 pieces collected by Msgr. Charles Beebe, a senior priest of the Diocese of Peoria; more than 70 Nativities from the personal collection of Msgr. William Watson, a senior priest of the diocese living in Odell; and about 200 Nativities that were collected by Father Ronald Margherio, OSB, chaplain at St. Bede Academy in Peru.

The Sisters of St. Francis of the Immaculate Conception of West Peoria, or Heading Avenue Franciscans as they are affectionately known, also made available their large collection of Rolan Johnson Christmas ornaments and framed art. The ornaments and prints are based on the Christmas cards designed by the Peoria man who was considered one of the best screen-print artists in the world. 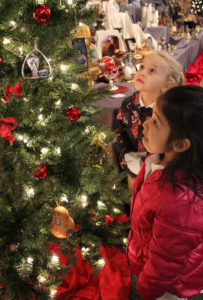 Holy Family pre-schoolers Maya Fischer and Isabella Vargas find sources of wonder in the Nativity ornaments on a revolving tree at the 2017 Community Festival of Nativities in Peoria. (The Catholic Post/Jennifer Willems)

St. Vincent de Paul’s participation in the festival was intended as an ecumenical contribution to Peoria and a way of educating people, according to Father James Pallardy, pastor, who said they brought a very traditional Catholic representation to the effort.

“Santa and the commercialized aspect has really become dominant in the Christmas season, but exhibiting the Nativity, especially in such a large and unifying format through the festival really keeps us aware that we’re all really celebrating the birth of the Lord,” he said.

Msgr. Beebe added to the educational component, speaking to various groups about the origin of the Nativity scene in a cave in Greccio, Italy. St. Francis of Assisi is credited with assembling the scene for a Mass celebrated at midnight in 1223.

A miracle happened that night, when the Christ Child appeared on the altar at the moment of consecration, Msgr. Beebe said.

“Ever since Francis’ time, the Christmas creche has been reproduced in nearly every culture and society on earth,” he said. “And here we have gathered together in one spot for this festival of Nativities, so many examples of this Christmas creche. They are all so beautiful and reflect the beauty of this holy season.”

More importantly, they remind us of the true meaning of Christmas, that “the Word became flesh and dwelt among us,” Msgr. Beebe said.

Father Ronald, who started collecting Nativity scenes as a student at Loras College in Dubuque, Iowa, said it is important for families to retain this aspect of the Christmas celebration.

“My family had a set. When I was a little kid we would say prayers before Christmas in front of the Nativity set,” he said. “My mom still puts up the same set.”

Everyone should have a Nativity, even if they don’t have any decorations.

“We need to be reminded,” Father Ronald said. “There’s nothing like this that reminds us again.”