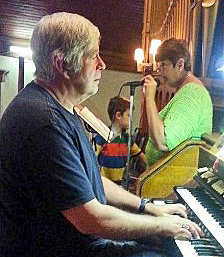 Longtime collaborators Sonny Huffman and Carol Wake do what they loved to do most --- make music together. Her death devastated him, but her last Christmas present to him gave him hope. Provided photo

FROM THE EDITOR: In the following reflection, Sonny Huffman talks about his friend, Carol Wake, a longtime music teacher and church musician who served at St. Bernard and St. Vincent de Paul, both in Peoria, until her death. He continues to live in Peoria and minister as an organist for Masses at St. Vincent de Paul Church.

Many people throughout the Diocese of Peoria knew Carol Wake. Carol recruited me several years ago to be the organist for the choirs she directed. It didn’t take long before we became very close friends.

Carol and I shared many personal aspects of our lives and it was not unusual for her to show up at my house or send messages or emails regarding the music she planned. Carol stayed close when I went through Stage IV lymphoma. Anybody that knew Carol knew she had the gift of hospitality and concern for others. Father (James) Pallardy used to tease us about being “Sonny and Cher” because we worked so well together.

Each Christmas Eve after Mass, we would exchange gifts. We always tried to outdo each other by giving gifts with a musical theme. My house is full of these gifts today. All through the year we would tease each other by saying, “I found you a Christmas present today.” I really looked forward to this fun time we shared every year.

Carol passed away suddenly on Oct. 20, 2015. I was devastated and totally in a depression. My best friend was gone. That Christmas Eve I totally felt dead inside. I already had my gift for Carol, sitting in the attic, alone and unused.

On Christmas Day 2015, my family came over after Mass and we exchanged gifts. Like many families, if the boxes are really nice we reuse them. As I was collecting the empty boxes, something fell out of the lid of one. It was a Christmas bag and inside was Carol’s handwriting: “To Sonny, Merry Christmas! Love, Carol.” The bag contained a musical tie and a musical Christmas ornament.

My face turned white. I had never seen that bag before and surely never noticed it when I was wrapping gifts. I felt like crying. It was as if Carol was still with me and letting me know that she is fine.

I have prayed for Carol every day since she passed away. I can still feel her presence and get emotional when I play a piece of music and notice her name written somewhere on the score.

I guess God wasn’t finished with me yet. The cancer went into remission. Maybe Carol put in a good word for me. I’ll have to wait to find out.