LA SALLE — There wasn’t a mirror ball trophy in sight, but Father Jacob Rose and Darcy Mollo came away from “Dance Dance Dance for Charity” Dec. 10 with a much better prize.

As the champions of the dance competition sponsored by OmniArts in Starved Rock Country, they will receive $1,500 for the arts programs at Peru Catholic School in Peru and St. Michael the Archangel School in Streator. In addition, the arts organization will award $500 to each of the schools represented in the competition. 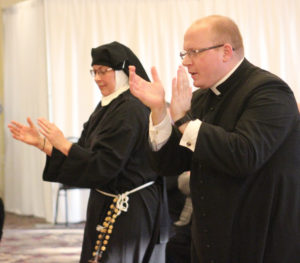 Taking a page from “Sister Act,” Darcy Mollo and Father Jacob Rose demonstrate some fancy footwork to an upbeat setting of “Hail, Holy Queen.” They earned a perfect score for this freestyle dance, as well as the Jive they performed in the first round of competition at “Dance Dance Dance for Charity” in La Salle on Dec. 10. (The Catholic Post/Jennifer Willems)

“I think it was great fun, and money and time well spent,” said Father Rose, pastor of St. Joseph Parish and Peru Catholic School. “Arts are always important in our schools and we teach our kids that way. It’s wonderful formation.”

“It was so much fun participating and then to win on top of it was really great,” Mollo told The Catholic Post. The fine arts teacher at the Streator school and a first grade aide there, she added, “The schools are going to benefit and that’s the most important thing.”

The Peru priest and Streator teacher were one of six teams that took to the dance floor at Senica’s Oak Ridge Golf Club. There were supposed to be seven, but one couple withdrew from the contest due to illness.

Each team was asked to prepare two dances — one assigned by OmniArts and one freestyle. The dance chosen for Father Rose and Mollo was the Jive, which they performed to “Shake a Tail Feather” from “The Blues Brothers” soundtrack. They dressed the part, wearing the black suits and hats of the two main characters, Jake and Elwood Blues. 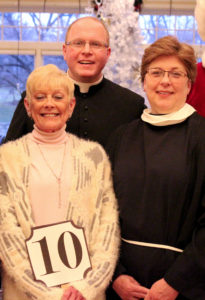 After being named the champions of “Dance Dance Dance for Charity,” Father Jacob Rose, pastor of St. Joseph Parish and Peru Catholic School in Peru, and Darcy Mollo, fine arts teacher at St. Michael the Archangel School in Streator, pose for a photo with judge Patty Gray. (The Catholic Post/Jennifer Willems

For their freestyle dance in the second round, Father Rose wore his cassock and Mollo donned a “habit” for an upbeat number performed to the setting of “Hail, Holy Queen” from the “Sister Act” soundtrack. This performance also included a segment of Walk the Moon’s “Shut Up and Dance.”

“This defines showmanship. You guys really rocked it,” said judge Maggie Frost, a local radio personality and longtime theater director. “I have to tell you, next Sunday I’m leaving St. Val’s because something’s going on at St. Joseph.”

“It’s so nice to see two people have so much fun,” fellow judge Patty Gray, a professional dancer and choreographer, told Mollo and Father Rose.

They received perfect scores (a 10 from each judge) for both dances. While the judges’ scores were logged in case of a tie, the votes that counted came from the audience members and school communities with $1 equal to one vote. 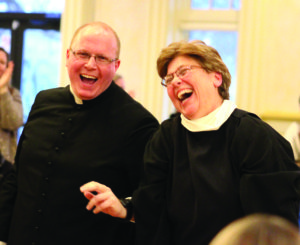 The priest and the teacher discovered an artistic kinship over the spring musicals at St. Michael the Archangel School while he was the parochial vicar there from 2013 to this year. Under Mollo’s direction, Father Rose played Daddy Warbucks in “Annie”; Beast in “Beauty and the Beast”; and Professor Marvel/The Wizard in “The Wizard of Oz.”

The Streator school was able to produce the musicals with grants from OmniArts, which allowed them to obtain the rights to the shows and get the pre-recorded music needed since St. Michael School doesn’t have a band. “It’s pricey, so OmniArts’ help is terrific,” Mollo said.

In the last six years, OmniArts has donated more than $80,000 to local schools and other arts organizations “to keep the arts alive.”

Amy Perona, principal at Peru Catholic, said the prize money will help them continue to stage the fine arts festival started there two years ago.

While he was hesitant to accept the invitation to participate in “Dance Dance Dance for Charity” at first, Father Rose said he decided to step outside his comfort zone as a pastor since he was asking his parishioners to do the same as disciples of Jesus Christ.

“Our Lord invites us to get out of the boat and follow him,” he said. “Sometimes that means doing things that are maybe a little out of the box.”