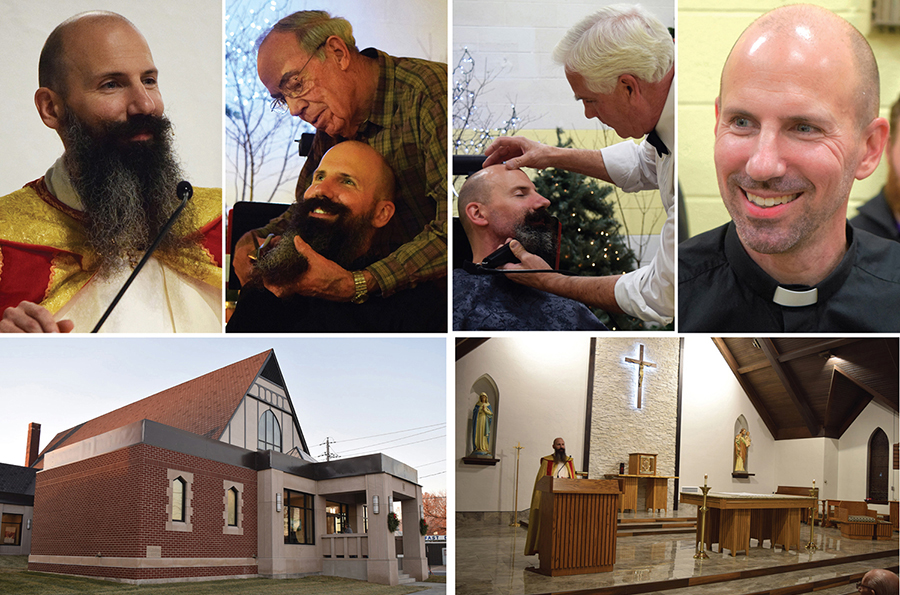 More than three years after he pledged not to shave until St. Ambrose Church in Milan had a handicapped accessible entrance, Father Charles Klamut allowed his beard to be shaved during a celebration of the church's reopening Dec. 1 after renovations that went well beyond two new entrances. Bishop Daniel R. Jenky, CSC, will rededicate the church at a 1:30 p.m. Mass on Sunday, Dec. 10. (The Catholic Post/Tom Dermody)

MILAN — “I feel my strength leaving me,” joked Father Charles Klamut as his long beard, more than three years in the growing, was cut in front of a crowd of cheering witnesses at St. Ambrose Parish Center here on Dec. 1.

But while Samson of the Old Testament lost his physical power after his flowing hair was chopped, Father Klamut’s beard and even its cutting were part of a project to strengthen this faith community just south of Rock Island for years to come. 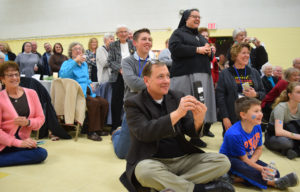 Dan DePorter (foreground) and other parishioners enjoyed — and photographed —
the cutting of their pastor’s beard. (The Catholic Post/Tom Dermody)

The cutting ceremony capped an evening that began with a prayer service during which parishioners got a first look at their newly renovated church. Since late April, Masses have taken place in the parish center as the 91-year-old church was improved with two new entrances (including one accessible to persons with physical disabilities), the creation of a gathering space and sacristy, new flooring, lighting, restrooms, and more.

A MAN OF HIS WORD

The project began with a pledge made from the pulpit by Father Klamut at a Mass in October 2014.

“In a moment of populist zeal,” the pastor recalled at the Dec. 1 celebration, “I said ‘I’m not going to shave until we have handicapped access.’ My thinking was, ‘It’s a ramp, how hard could it be?’”

But the project would grow, and so would the pastor’s beard. An addition with bathrooms was soon added to the ramp idea, which got parish leaders thinking about other needed church improvements, which necessitated a capital campaign.

“Three plus years later, here we are,” said Father Klamut. “I’m not perfect, but I am a man of my word. When I said I would not shave, I didn’t shave. Tonight’s the night.”

The trimming and shaving ceremony would take longer than the prayer service.

“This beard is not dying easily,” said Father Klamut as different shears, electric shavers, and hot towels were used in its removal.

The first to cut it was Don Hall, the winner of a raffle to determine who had the honor.

“He’s a little too excited,” said Father Klamut of Hall, a member of nearby St. Patrick Parish in Andalusia, where Father Klamut also serves as pastor.

“This could be a dangerous procedure,” mused Hall as he opened a bag with multiple shears. “I’ll hold my hands as steady as I can.”

“We won’t know who’s saying Mass,” said one. “He still looks pretty scruffy,” said another midway through the 25-minute job. And when the beard was finally gone, a woman shouted “You look 10 years younger!”

But what most excited the pastor and his flock this night was the fresh face of St. Ambrose Church, located at 312 W. First St.

“IT TURNED OUT GORGEOUS”

“Welcome to the new St. Ambrose,” Father Klamut said to applause from those who filled the church for the prayer service. “How many of you thought this day would never come,” he asked, and thanked all who had a role in the project’s successful completion.

Prior to the service, parishioners arrived early to admire the changes made possible by a successful “Renew and Restore” campaign that raised more than $900,000. 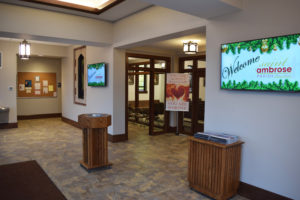 The renovation included the creation of a gathering space at the main entrance to St. Ambrose Church in Milan. (The Catholic Post/Tom Dermody)

“It turned out gorgeous,” said Jerry Fowler, who knows the project as well as anyone. He mounted cameras on the neighboring rectory that snapped nearly 565,000 photos of the construction progress over the course of seven months. Fowler then edited the photos down to a five-minute, time-lapse video shown at the Dec. 1 reception, which also featured entertainment by the Manny Lopez Quintet and presentations on parish history and its present outreaches.

“Before the renovation, people would have to come into church to talk,” said Fowler. “Now there’s space where they can converse and get to know one another.”

Parish volunteer Carrie McGuire told The Catholic Post she appreciates how elements of the original design were retained even as the church look was made more contemporary — including by a backlit silver crucifix on a new stone sanctuary wall.

Parishioners representing three generations spoke of their love for the parish at the reception.

“I want to thank all of the parishioners who contributed to the remodel,” said Harold Ryckaert, a lifetime member of St. Ambrose who married his wife, Judy, in the church in 1960. Like Ray Anderson and Dan DePorter who spoke before him, Ryckaert also thanked Father Klamut and the building committee “for timeless hours” and their wise use of resources.

“This parish is great!” said Ryckaert.

“PHASE ONE OF WHAT GOD WANTS TO DO”

Father Klamut hopes it becomes even greater, calling the physical improvements “phase one of what God wants to do here in Milan.”

“You and I know it doesn’t end here at church,” he said at the prayer service. “We built this place up so that we ourselves can be nourished to go out and be living water that can bless our neighborhood and community and make the greater Milan area a better place with the love of Jesus. Who is up for the challenge?”

The assembly responded with “Amens” so robust they hinted “Phase 2” might begin even before their pastor’s next shave.

EDITOR’S NOTE: More photos from the prayer service and celebration have been posted to The Catholic Post’s site on Facebook.