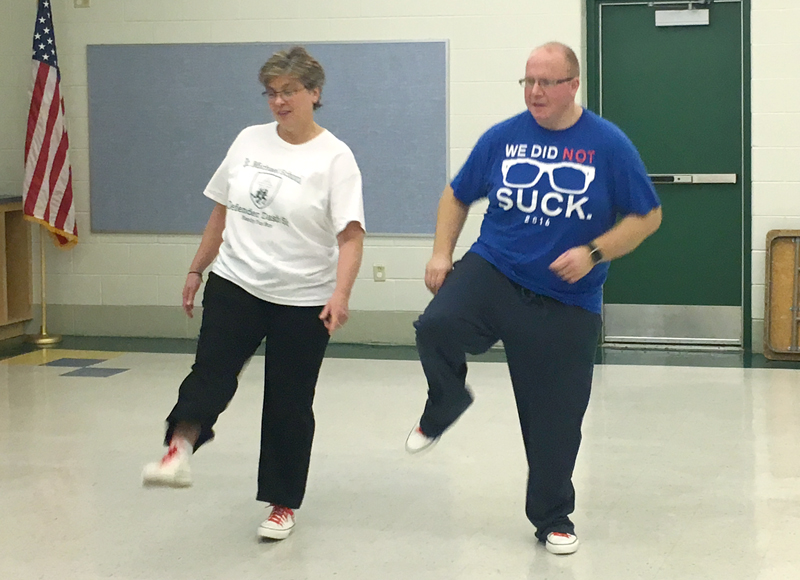 Darcy Mollo, fine arts teacher at St. Michael the Archangel School in Streator, and Father Jacob Rose, pastor of St. Joseph Parish and Peru Catholic School in Peru, work on their routine for "Dance Dance Dance for Charity." The competition to raise funds to keep the arts in Illinois Valley schools, will take place Sunday, Dec. 10, in the ballroom of Senica's Oak Ridge Golf Course in La Salle. (Provided photo)

LA SALLE — Father Jacob Rose and Darcy Mollo may not have a lot of experience when it comes to ballroom dancing, but that has made them all the more determined to “Dance Dance Dance for Charity” in an effort to keep the arts in Illinois Valley schools.

Sponsored by OmniArts in Starved Rock Country, the competition is planned for Sunday, Dec. 10, in the ballroom of Senica’s Oak Ridge Golf Club, 658 East U.S. Highway 6, in La Salle. It will begin at 2 p.m.

Father Rose, pastor of St. Joseph Parish and Peru Catholic School in Peru, and Mollo, the fine arts teacher at St. Michael the Archangel School in Streator, are one of seven teams that will take to the floor for two dances — one assigned by OmniArts and one freestyle. The dance chosen for them is The Jive, an upbeat variation of the Jitterbug, a form of Swing dance.

“At first I was hesitant, but I heard a great quote once: ‘Be more afraid of missing an opportunity than you’re afraid of failing,’” Father Rose told The Catholic Post. “When life gives us opportunities, sometimes we should take them, even if that forces us out of our comfort zones.”

In this case, it is also provides a chance for him to help the community gather around Peru Catholic School and encourage people to get involved in supporting the arts. He and Mollo are the only team in the competition connected to Catholic schools.

“The (preparation) process is far more intense than anyone would remotely understand without being involved,” Mollo explained. “It’s so easy for us to turn on a show similar to ‘Dancing with the Stars’ and say, ‘Oh, didn’t they do a wonderful job of dancing?’ but the workout is very intense.”

“It hasn’t been as easy as what people might think,” Mollo said. “That’s not to say it has not been a blast because it has absolutely been one of the most fun things I’ve done in a long time outside musical theater.”

“In a way, it’s like writing a homily,” Father Rose said of the hours of practice, together and individually.

“Archbishop (Fulton J.) Sheen said in order to preach well for one minute, you have to spend an hour in front of the Blessed Sacrament. I think in order to dance well — or to do anything — you have to invest the time,” he said.

The priest and the teacher bonded over the spring musicals at St. Michael the Archangel School while he was the parochial vicar there from 2013 to this year. Under Mollo’s direction, Father Rose played Daddy Warbucks in “Annie”; Beast in “Beauty and the Beast”; and Professor Marvel/the Wizard in “The Wizard of Oz.”

The Streator school was able to produce the musicals with grants from OmniArts, which allowed them to obtain the rights to the shows and get the pre-recorded music needed since St. Michael School doesn’t have a band. “It’s pricey, so OmniArts’ help is terrific,” Mollo said.

Unlike “Dancing with the Stars,” where the voting taking place only after each couple has performed, voting for the winning team of “Dance Dance Dance for Charity” is already underway — and it’s OK to stuff the ballot box.

Voting at the competition on Dec. 10 is as easy as placing $1 in the jar for your favorite couple. Each dollar counts as one vote.

Father Rose added that people can vote by donating online while purchasing tickets for the event at OmniArts.org.

He said the teams have also been encouraged to involve their communities in getting out the vote in whatever way they saw fit.

At St. Michael the Archangel School and Peru Catholic School that has included a couple of days out of uniform for a contribution of a dollar or two or whatever students wanted to donate. Those will go into the voting jar, as will the proceeds from a “bakeless bake sale” taking place through next week at both schools. The Peru and Streator parishes have been invited to participate, too.

“So we’re bringing with us, when we go to compete, our entire communities,” Father Rose said.

Any prize money given to the winning team will be shared by Peru Catholic and St. Michael the Archangel.

Amy Perona, principal at Peru Catholic, said that would help them continue to stage the fine arts festival started there two years ago.

“We have a lot of talent here, be it art or painting, writing, poetry, music, voice or instrument,” she told The Post. “So we started a fine arts program and did it with the intention of making sure we got our community involved.

“We don’t charge admission to the festival. We want it to be a free event that just brings awareness to the arts,” Perona said, noting that Father Rose’s share of the winnings could help to supplement the costs involved.

While some have questioned spending money on the arts in schools, Perona emphasized that these are not “wasted dollars.”

“It builds kids up. When you perform or have the ability to display a talent, there’s a lot of confidence that comes with that,” she said. “For me, it’s just a way to keep building our students up and showcasing the multiple facets of their gifts. It’s just so beautiful.”