Invitation to ‘Spiritual Motherhood’ as a way to care for souls, especially priests 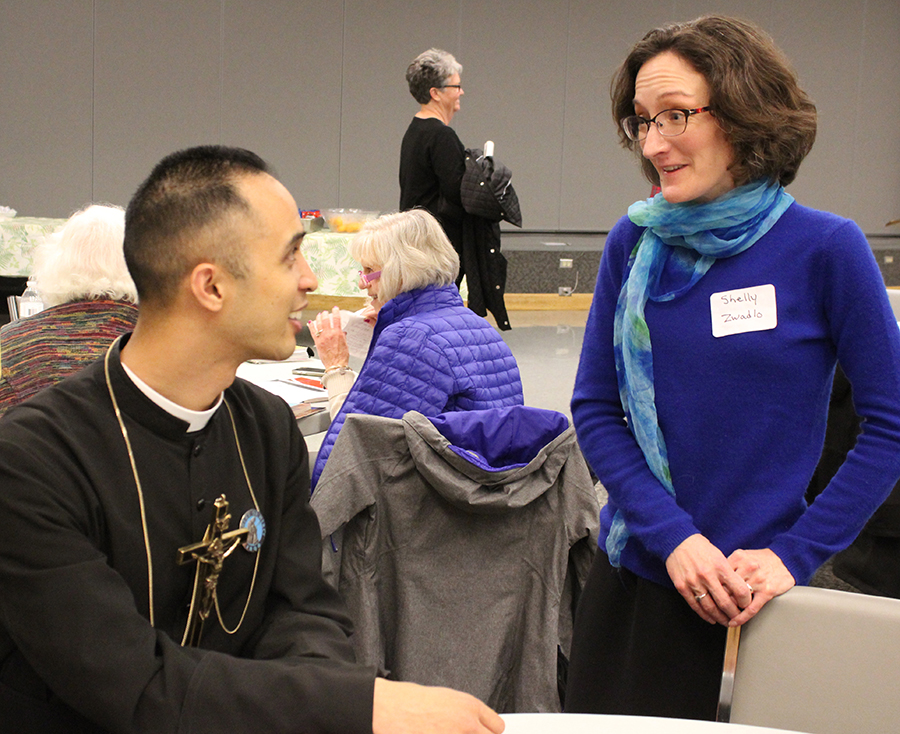 Shelly Zwadlo of Historic St. Patrick Parish in Bloomington visits with Father Joseph Aytona, CPM, during a break in the Spiritual Motherhood Conference sponsored by the Bishop's Commission on Women in the Church and in Society. It was held Nov. 18 at Blessed Sacrament in Morton. (The Catholic Post/Jennifer Willems)

MORTON — Mary’s willingness to do God’s will made it possible for Jesus to begin his priesthood through her motherhood, and the priests who follow him now need the same kind of prayer and sacrifice in the form of spiritual motherhood, according to Father Joseph Aytona.

A member of the Fathers of Mercy and founder of the Spiritual Motherhood Sodality, Father Aytona joined more than 50 people at Blessed Sacrament Church for a conference on the subject Nov. 18. It was sponsored by the Bishop’s Commission on Women in the Church and in Society.

The day also included Mass, opportunities for the sacrament of reconciliation, a Holy Hour with adoration of the Blessed Sacrament and the rosary, and lunch.

“Every priestly vocation comes from the heart of God, but passes through the heart of a mother,” he said, quoting St. Pius X. Women are uniquely qualified for this because “the capacity for another human person, body and soul, is entrusted to women alone.”

St. John Paul II also noted that women have a strength that is capable of bearing great sorrows, a limitless fidelity and tireless devotion to work, and the ability to combine penetrating intuition with words of support and encouragement, Father Aytona said.

“So motherly concern is already in the nature of being a woman,” he told conference participants, most of whom were women. He added that “the history of every human being passes through the threshold of womanhood.”

That’s not to say that men and even children don’t have a role to play in spiritually supporting priests, Father Aytona said.

He defined spiritual motherhood as a supernatural way of caring for souls, especially priests. It nurtures divine life in others by doing God’s will, just as Mary did.

“Mary had planned to be a virgin all her life. She gave all of that to God,” Father Aytona said. “She conceived Jesus first in faith and then in her body. Likewise, any spiritual children we have come from our ‘yes’ to God.

Spiritual motherhood is not for the faint of heart, however. It requires the willingness to deny ourselves to give grace to others, especially priests, he said.

That will look different depending on the person’s state of life. For some that could mean offering an extra Holy Hour or saying a rosary.

“It doesn’t have to be big,” Father Aytona said. “You can do small things with great love.”

This prayerful support for priests is vital, because “no priest, no Eucharist; no Eucharist, no Jesus; No Jesus, no nothing.”

“This is not something to do if you have spare time, but because we need the sacraments,” Father Aytona said.

The Spiritual Motherhood Sodality he founded is worldwide. His goal is to have three spiritual mothers for each priest who asks to be included.

The apex of Mary’s motherhood came at the foot of the cross and those who seek to be spiritual mothers for priests today must be close to the Eucharist at Mass and adoration, he said. Praying the “Angelus” and “Memorare” and making spiritual Communions are also recommended.

Father Aytona said forming a group may make this easier.

For more information on spiritual motherhood or the Spiritual Motherhood Sodality and how to join, visit spiritualmaternity.org.