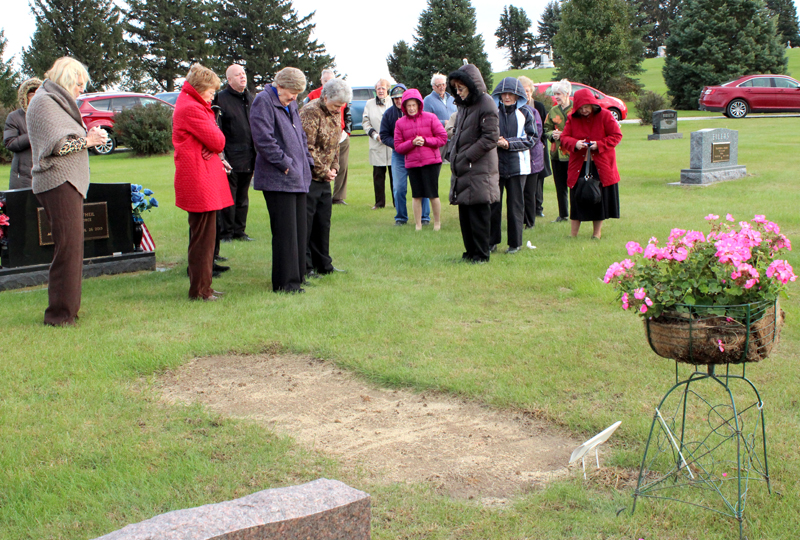 Father Timothy Sauppé leads prayers for the dead at Sacred Heart Cemetery in Annawan at the conclusion of a Day of Remembrance for All Souls sponsored by the Peoria Diocesan Council of Catholic Women. The grave of Maralyn Guthrie, former DCCW president, is in the foreground. (The Catholic Post/Jennifer Willems)

ANNAWAN — Maralyn Guthrie loved the Peoria Diocesan Council of Catholic Women and spared no effort to get people involved in the good work being done. The affection was mutual and on Nov. 6, the DCCW recalled her many contributions at a Day of Remembrance for All Souls. 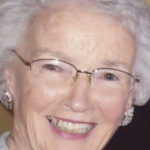 It was held at Sacred Heart in Annawan, where Mrs. Guthrie played the organ for four decades and was an active member of the Sacred Heart Altar and Rosary Society. The speaker was Father Timothy Sauppé, who was pastor there for 10 years and now serves as pastor of St. Mary in Westville and St. Isaac Jogues in Georgetown.

In addition to his presentations, Father Sauppé celebrated Mass for those who attended. After lunch, they gathered in church again for a Holy Hour that included eucharistic adoration, the rosary and Divine Mercy Chaplet, an opportunity for the sacrament of reconciliation, and Benediction.

Before they went their separate ways, Father Sauppé led them to Sacred Heart Cemetery to pray for the deceased members of the parish. They made a special visit to the grave of Mrs. Guthrie, who died May 25, 2017, at the age of 91.

“When I came here in 1997, Maralyn Guthrie was one of the first ones to greet me,” Father Sauppé recalled. “We had breakfast and talked, and she told me about the DCCW. I had been a priest of the diocese for eight years and had never heard of it.”

Mrs. Guthrie brought him up to speed in a hurry and now Father Sauppé makes it a point to attend the Peoria DCCW’s Volunteer Appreciation Luncheon each spring with his parishioners. 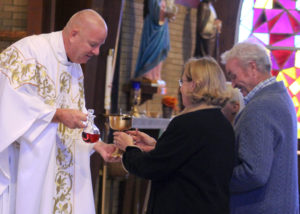 Father Timothy Sauppé receives the offertory gifts of bread and wine from the daughter and son of Maralyn Guthrie, Jeanne Tsukno and Mark Guthrie, and their friend Pattie Lewis at the Mass for the Day of Remembrance for All Souls on Nov. 6. It was held at Sacred Heart in Annawan. (The Catholic Post/Jennifer Willems)

“She loved the diocese and the Diocesan Council of Catholic Women,” said her son, Mark Guthrie, who attended the Day of Remembrance with his sister, Jeanne Tsukno, and their friend, Pattie Lewis. His mother had a special place in her heart for Bishop Edward W. O’Rourke and Bishop Daniel R. Jenky, CSC, he added.

Guthrie shared a prayer he found while going through his mother’s things, “A Prayer for Our Departed.” He prays it each morning and invited the women to join him.

“It gives me a little energy when I say it,” he told them.

Father Sauppé said it is important to pray for the “poor souls in purgatory” since they can no longer pray for themselves. While confusion remains about purgatory, the Catechism of the Catholic Church notes it is a time of final purification “so as to achieve the holiness necessary to enter the joy of heaven,” he reminded them.

Father Sauppé said the church gives us a special time of year, Nov. 1-7, when plenary indulgences can be gained and applied to those in purgatory. What is required is everything the women did at the Day of Remembrance: attend Mass, receive the Eucharist, make a sacramental confession, offer prayers for the pope, and do a good work, such as visit a Catholic cemetery.

He encouraged them to take comfort in knowing that the Blessed Mother is always there with her maternal care and concern, and said they could count on her to intercede for them.