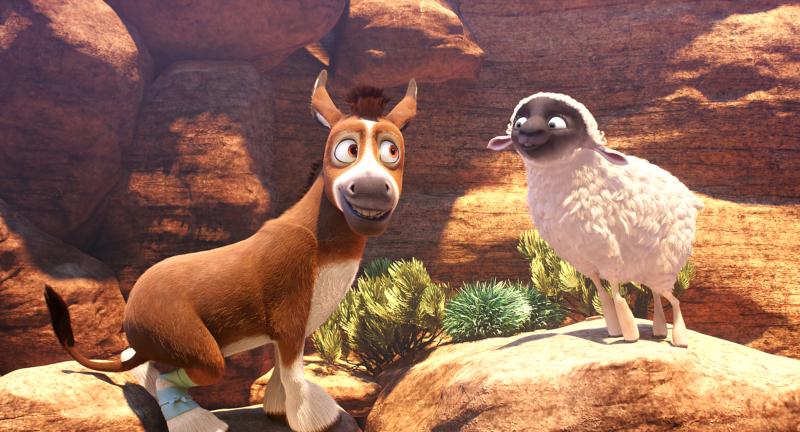 Delightful animated version of the Christmas story, told from the perspective of some of the animals present in the manger. Chief among them is a gentle donkey (voice of Steven Yeun) from Nazareth who yearns to exchange his life of drudgery working in a grain mill for the fame and prestige to be gained by joining the storied royal caravan. But his quest takes a detour after his leg, wounded in his successful escape from confinement, is tended by the Virgin Mary (voiced by Gina Rodriguez).

Despite the mild disapproval of St. Joseph (voice of Zachary Levi), Mary adopts her patient as a pet and he becomes dedicated to protecting the parents-to-be, as they journey to Bethlehem, from the murderous scheming of King Herod (voiced by Christopher Plummer). Aiding him is his best friend, a lively dove (voice of Keegan-Michael Key), as well as an affectionate sheep (voice of Aidy Bryant) the duo of pals encounters along the way.

Director Timothy Reckart skillfully balances religious themes such as the importance of prayer and the value of forgiveness with a more secular message about pursuing your dreams, and throws in a healthy dose of straightforward entertainment. A treat for all but the tiniest.

Scenes of peril, a bit of very mild scatological humor. The Catholic News Service classification is A-I — general patronage. The Motion Picture Association of America rating is PG — parental guidance suggested. Some material may not be suitable for children.