Leonard Hybki, a member of St. Valentine Parish in Peru who served in the U.S. Army during the Korea conflict, salutes as the National Anthem is sung outside Queen of the Holy Rosary Shrine in LaSalle in ceremonies following a Veterans Day Mass on Nov. 8. (The Catholic Post/Tom Dermody)

LA SALLE — Students from Trinity Catholic Academy here got a Veterans Day homework assignment during a special Mass that drew military veterans as well as former priest military chaplains to the Diocese of Peoria’s shrine to war veterans here on Nov. 8.

“On this Veterans Day, if you meet a veteran, I ask you to do something special,” said Msgr. John Prendergast, a senior priest of the diocese who for 22 years served soldiers and their families as a highly decorated, paratrooping U.S. Army chaplain. Msgr. Prendergast was homilist at the early Veterans Day Mass at Queen of the Holy Rosary Shrine, which was attended by the Trinity Catholic Academy student body, many of whom had roles in the liturgy. 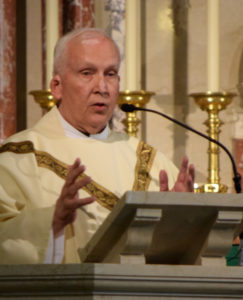 In his homily, Msgr. John Prendergast, a former paratrooping priest chaplain in the U.S. Army, said military chaplains carry “the memories of every solkder and airman and Marine and navy person that we ministered to.” (The Catholic Post/Tom Dermody)

While it is always appropriate to thank a veteran for his or her service to the country, Msgr. Prendergast asked the students and others to go a step further, especially with any veterans in their families as Veterans Day neared on Nov. 11.

“Ask them to tell you their story,” said Msgr. Prendergast, assuring the students that the veterans “want to tell you about what they did.” When their story is finished, he said, thank them.

The special Mass was coordinated by the Museums of the Diocese of Peoria, which throughout 2017 has featured an exhibit honoring the sacrifices and service of more than 50 military chaplains throughout diocesan history.

The priest chaplains were presented with “care packages” of appreciation brought forward at the end of Mass by six Trinity Catholic Academy students. The packages — assembled by Sister Lea Stefancova, FSJB, and Sister Ann Gill, FSJB, of the diocesan museum and archives — included baked goods and handmade items from the Franciscan Sisters of John the Baptist.

As the packages were presented, Father Paul Carlson, pastor of the LaSalle Catholic parishes and principal celebrant of the Mass, read a letter from Msgr. Stanley Deptula, director of the diocesan Office of Divine Worship and museum director. 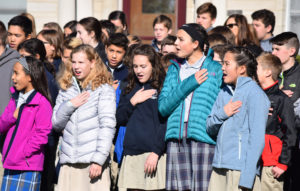 “As an American, I am proud of all those who serve our country in the Armed Forces,” wrote Msgr. Deptula. “As a priest, I am humbled by the sacrifices you offer as military chaplains and I want to say thank you.

“Please accept this as a small token of our heartfelt appreciation,” the letter concluded.

The memorial Mass featured prayers for priest chaplains who have died.

At the start of his homily, Msgr. Prendergast asked all military veterans present to stand. About two dozen rose to their feet, including the priests in the sanctuary.

While to the grade school students many of the veterans of wars dating back to World War II may “look so old,” Msgr. Prendergast assured that “inside of them they see themselves like they were when they wore the uniform — young.”

He led the assembly in sustained applause for the veterans and chaplains.

Msgr. Prendergast gave thanks that, in “God’s wonderful plan to bring his love, care, concern, healing, and forgiveness” to all that he gave some priests “a vocation within a vocation” to be military chaplains. 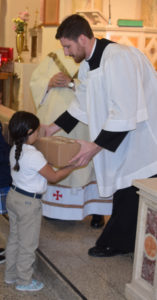 “We carry in our hearts the memories of every soldier and airman and Marine and Navy person we ministered to,” said Msgr. Prendergast. Likewise, most Catholic military veterans can recall “a special moment that God touched your life through a priest-chaplain.”

“You might not remember his name, and that’s OK,” said Msgr. Prendergast, “because it was never about the chaplain. It was always about God’s love for you at a time of great peril and great danger.”

Following Mass, the assembly gathered on the church lawn for a brief ceremony that included the singing of the National Anthem, the playing of “Taps,” and a 21-gun salute provided by five members of the LaSalle-Oglesby Veterans Memorial Group.

“I’d like to thank everyone responsible” for the Mass and ceremony, said Leonard Hybki, a member of St. Valentine Parish in Peru who served in the U.S. Army from 1952 to 1953 during the Korean conflict.

Jim Arkins, a U.S. Navy World War II veteran who will turn 100 on Dec. 20, said he was emotionally moved by the Mass and ceremony.

“It was very impressive,” said Arkins, a lifelong member of St. Patrick Parish in LaSalle. The parish has in its files correspondences between Arkins and the St. Ann Sodality — which supplied letters and care packages to the service personnel — dating back to 1942.

“They were very good to us,” Arkins recalled.

Editor’s note: More photos from the Mass and ceremony have been posted to The Catholic Post’s site on Facebook. 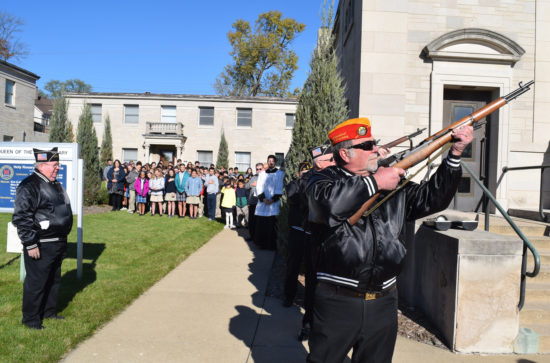 As students from Trinity Catholic Academy look on, members of the LaSalle-Oglesby Veterans Memorial Group fire a salute to veterans during ceremonies at Queen of the Holy Rosary Shrine in LaSalle on Nov. 8. (The Catholic Post/Tom Dermody)