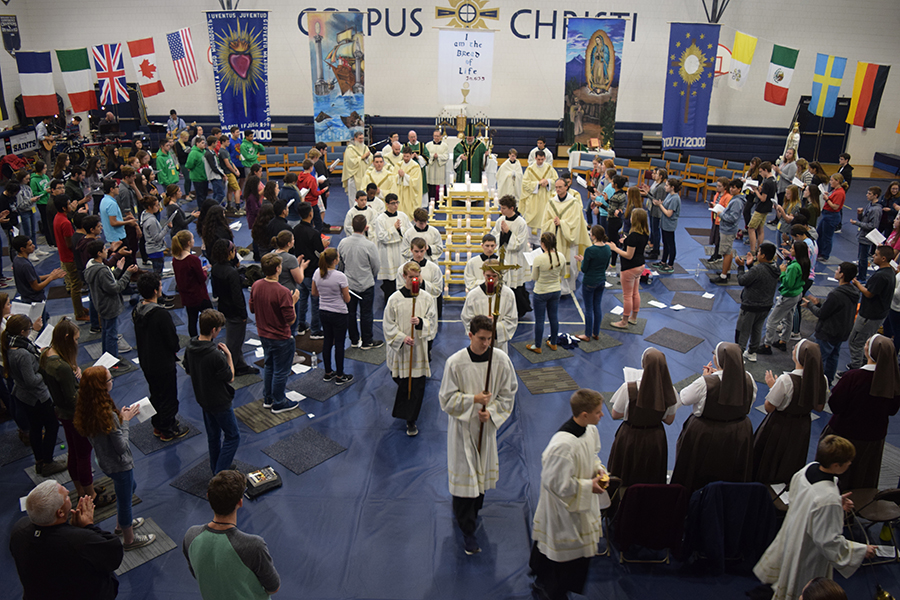 BLOOMINGTON — Some of the 150 high school youth who took part in a diocesan retreat Nov. 3-5 came tired and stressed from busy school and activity schedules. Others attended reluctantly, prodded by parents or friends.

But after spending 40 hours with Catholic peers from around the diocese — and in the constant presence of Jesus in the Blessed Sacrament — they left renewed in their faith, energized, and even changed. 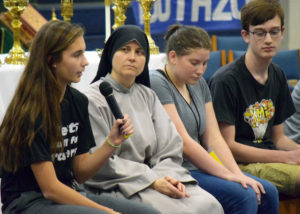 Lily Beardsley of Alleman High School in Rock Island shares a “God moment” she experienced during the Abide in Me youth retreat Nov. 3-5 at Corpus Christi School in Bloomington. Looking on is Sister Agnes of the Franciscan Sisters of the Renewal. (The Catholic Post/Tom Dermody)

“I could have spent this weekend at home sitting and doing nothing,” said a male retreatant from Morton, one of more than a dozen who gave testimonies Sunday at the end of the diocese’s first Abide in Me youth retreat. “But this was a complete game-changer for me . . . an amazing experience.”

A female participant from LaSalle said the first night of the retreat, which included opportunities for the sacrament of reconciliation and adoration of the Blessed Sacrament, “melted my heart.”

“I felt like God was speaking to me while we were in adoration,” she told the group. Saying she is active in sports and always on the go, she confessed that as she looked at Jesus in the monstrance tears fell as she contemplated Christ’s love.

The retreat — a Eucharist-focused weekend led by a national YOUTH 2000 team including Franciscan Friars and Sisters of the Renewal — was hosted at Corpus Christi School in Bloomington and drew participants from parishes and schools around the diocese. The largest contingents were from St. Jude Parish, Peoria; Alleman High School in Rock Island; and St. Patrick Church of Merna in Bloomington.

“A LEAP OF FAITH”

“Thank you all for coming,” said Father Eric Bolek, parochial vicar at St. Jude Parish in Peoria and one of the first to suggest the diocesan retreat months ago. “It was a leap of faith for some of you to come, since this is a new kind of retreat.”

Speaking at the close of a Mass celebrated Sunday by Bishop Daniel R. Jenky, CSC, Father Bolek praised the students for their devotion and reverence, and prayed that the seeds of faith planted that weekend “continue to grow in your heart as you strive to be the saints God calls you to be.” 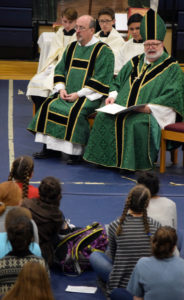 In his homily at the Abide in Me retreat’s closing Mass on Sunday, Bishop Daniel R. Jenky, CSC, urged the high school participants to “become more of a friend of the Lord, fall more and more in love with God, and more and more open your hearts and your lives to the guidance of the Holy Spirit.” (The Catholic Post/Tom Dermody)

The bishop said that, because they came to the retreat, people in their schools and families will look to them to be serious about their faith. He urged them to accept that responsibility not for their gain, but to give God glory.

“Become more of a friend of the Lord,” he urged. “Fall more and more in love with God. More and more, open your hearts and your lives to the guidance of the Holy Spirit.”

If they live in Christ and serve their neighbors, “you will know a happiness and meaning” that is a foretaste of heaven, the bishop promised.

HUNGRY FOR KNOWLEDGE OF THE FAITH

Abide in Me was planned by a committee including Father Bolek; Shirley Plaag and Karley Bates, director and program director of the diocesan Office of Evangelization and Faith Formation; Father Michael Pica, parochial vicar of St. Patrick Church of Merna in Bloomington and on the chaplain team of Central Catholic High School; Sarah Hogan; Katie Bogner; Deacon Mike Schallmoser; Joseph Taylor; Ryan Purcell; and Phil Lee.

For Karley Bates, Abide in Me was the first major event she helped to coordinate since joining the diocesan staff in August.  She noted that the perpetual adoration aspect is what sets a YOUTH 2000-led retreat apart, and she was not surprised to hear so many teens speak of its impact.

During much of the retreat, the Eucharist was exposed in a monstrance that was placed atop rows of stacked candles referred to as the “burning bush.”

“Forty hours of being in front of the Eucharist during talks and testimonies — it’s pretty much impossible to not get some sort of grace out of that,” Bates told The Catholic Post. 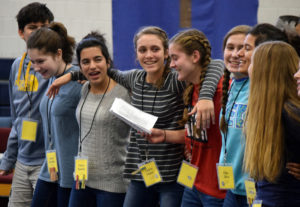 A group of high school youth link arms and share the joy of Christ as the band plays a praise song at the Abide in Me retreat in Bloomington. (The Catholic Post/Tom Dermody)

Workshops throughout the weekend sought to provide answers to questions such as “Who is Jesus to me?”; “What is the meaning of life?” “What values do I seek?”; “How do you live a Christian life in today’s society?” and “Why is my Catholic faith important?” Praise music during the retreat was provided by a band featuring Abraham Gross of St. Paul, Minnesota.

Bates said a highlight for her was when the teens broke into eight groups for panel discussions. She was on a panel for high school freshmen girls, the largest group at the retreat.

During a question and answer period, “these girls jumped in right off the bat and they went so deep and stayed there,” she said. “I was blown away by how much they knew about their faith and how they weren’t taking things lightly. We had so many questions we were late for a couple of talks!

“They were hungry for knowledge and learning about their faith, which was good to see,” said Bates.

In recent years, a Diocesan Youth Rally has taken place in early November. The annual rally has been scheduled for March 24, 2018, at the Spalding Pastoral Center in Peoria. Singer and songwriter Jackie Francois Angel will be keynote speaker on the theme, “Spirit Lead Me.”

EDITOR’S NOTE: More photos from the youth retreat have been posted to The Catholic Post’s site on Facebook.