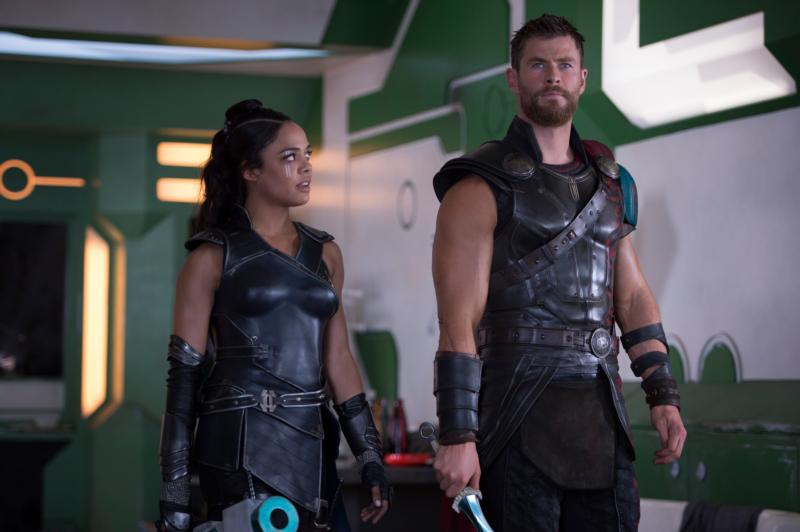 Tessa Thompson and Chris Hemsworth star in a scene from the movie "Thor: Ragnarok." The Catholic News Service classification is A-III -- adults. (CNS/Disney)

A healthy dose of humor keeps this sweeping Marvel Comics adaptation — the second sequel to the 2011 original — on the boil, although it still registers as overlong.

The straight-shooting Norse god of thunder (Chris Hemsworth) and his ever-wily brother, Loki (Tom Hiddleston), will have to patch up their differences if they are to defeat the schemes of their elder sister, the goddess of death, Hela (Cate Blanchett). She has been released from a long captivity by the demise of their father, Odin (Anthony Hopkins), and aims to dominate their home planet, Asgard. Along with Loki’s shifting loyalties, Thor must also contend with Hela’s destruction of his trademark hammer and with being taken prisoner by a bounty hunter (Tessa Thompson) who hands him over to the impresario (Jeff Goldblum) of a series of gladiatorial games.

The mythological elements blended into director Taika Waititi’s superhero adventure — which also features Mark Ruffalo as Bruce Banner, aka the Hulk — are not for impressionable kids. But grown moviegoers will find relatively little to object to along the path of this spiffy intergalactic quest. Possibly acceptable for older teens.