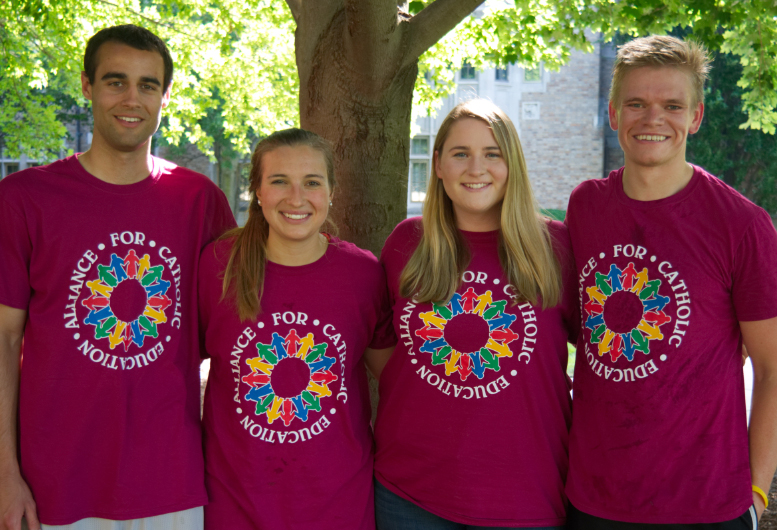 Kyle VanOverbeke, Maria Wnorowski, Erin McNally and Brandon Early make up the second cohort of teaching fellows to serve in Catholic schools of the diocese through the Alliance of Catholic Education, sponsored by the University of Notre Dame. (Provided photo)

The opportunity to serve, grow in faith, gain teaching experience and make a difference has drawn four more young adults to Catholic schools in Peoria as teaching fellows with the Alliance for Catholic Education. They are the second cohort sent by the program, which is sponsored by the University of Notre Dame.

They aren’t all that comfortable with the attention, however. 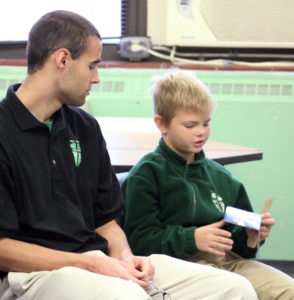 Kyle VanOverbeke likes to start and end the day with his fourth-graders at Holy Family School in Peoria sharing something they learned. (The Catholic Post/Jennifer Willems)

“We don’t think we’re really special,” said Kyle VanOverbeke of Albany, Minnesota, who is teaching fourth grade at Holy Family School in Peoria. “We’re among the teachers who are working in the diocese and around the country.”

“There are teachers who have been doing very hard work in Catholic school classrooms and public schools,” added Brandon Early of Newmarket, New Hampshire, who is teaching junior high science at Holy Family. “While we’re often flattered by the attention we get as new teachers from new places, we definitely feel there are other teachers who should have recognition coming their way.”

They are eager to make it known that they have mentor teachers, with many years of experience helping them learn the ropes. For VanOverbeke, that’s fifth grade teacher Rhonda Motyl, while Early is benefiting from the guidance of Fran Weber, the former science teacher who now heads Holy Family’s new STEM lab.

Rounding out the quartet are Erin McNally of Raleigh, North Carolina, who is teaching Spanish and working with students on English as a Second Language at St. Mark School, and Maria Wnorowski of Christiansburg, Virginia, who is teaching sophomore chemistry at Peoria Notre Dame High School. McNally’s mentor is math teacher Jessica Freeman and Wnorowski’s is English teacher Jacqueline Kelly.

Each of the teaching fellows holds an undergraduate degree and has been placed in their new schools by the Alliance for Catholic Education according to their area of study and the needs identified by the principals. In addition to teaching, they are taking online classes through the University of Notre Dame and are expected to return to campus in the summer for more coursework and formation.

At the end of two years, they will receive a master’s degree in education.

While they’re here, they are living in a house provided by the Diocese of Peoria and receive a small stipend. Being in this kind of “intentional community” was one of the drawing points, they said. 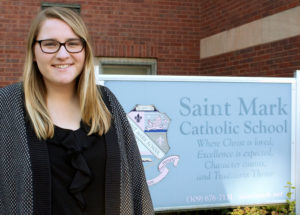 Erin McNally hopes to inspire a love for learning in her students at St. Mark School in Peoria. (The Catholic Post/Jennifer Willems)

“I really valued the chance to grow with the people I live with spiritually, personally,” said VanOverbeke, who earned his bachelor’s degree in elementary education at St. Cloud State University in St. Cloud, Minnesota.

“I think intentional community is meant to stretch anybody, where they’re at,” he told The Catholic Post. “So yes, I am being stretched in good ways.”

He added that teaching is hard, but worth it.

That’s why it’s helpful to have three other people to bounce ideas off of, said McNally, who majored in Spanish and international studies at Virginia Tech. Between graduation and coming into the ACE program she was a Spanish teacher and substitute at a Catholic school in Williamsburg, Virginia, and a social media marketing manager, working with Spanish-speaking clients.

“It’s a great opportunity,” she said of ACE. “I like being able to be a first-year teacher, but having a big support system. It’s nice to have a bunch of people rooting for you.”

She added that the four teaching fellows have been attending Mass together at different Catholic churches in the Peoria area, and said she enjoys seeing the prayer lives her housemates bring to the community.

A change of scenery and towns was not an issue for her, since she had studied in Valencia, Spain, for four months during her college years. In fact, being fully immersed in another culture helped her see that she had a true aptitude for Spanish and fostered in her a desire to break down barriers between people so they could understand one another better on all levels.

Early wanted to be a doctor when he entered St. Anselm College in Manchester, New Hampshire, but soon discovered that he had a passion for environmental science. He switched to natural sciences, earning a degree in 2014. 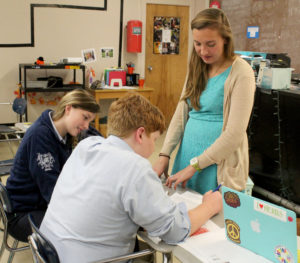 Maria Wnorowski said she enjoys the person-to-person interaction with the students at Peoria Notre Dame. (The Catholic Post/Jennifer Willems)

He taught fourth grade with AmeriCorps for a year, which he enjoyed, and worked as a stockbroker, which didn’t quite fit his personality.

“I missed the opportunity for who I was as a person to have an impact in the work I was doing,” he said, noting that at about this time he got an email from an ACE recruiter at the University of Notre Dame.

Now happily ensconced at Holy Family, where he also teaches sixth- and seventh-grade religion, Early hopes to work with his students on making his classroom as “green” as possible.

He appreciates how welcoming the parish community has been and said, “They take the idea of being a holy family very seriously.”

Wnorowski, who graduated from the University of Virginia in Charlottesville with a degree in biology in May, said she’s hoping to grow her skills so that she can grow her opportunities for the future through the Alliance for Catholic Education. Among the options she’s exploring is working with Teach for America or possibly applying to medical school.

Teaching at Peoria Notre Dame has shown her how much she enjoys working with high school students said Wnorowski, also known as “Miss Dub.”

“The kids are very enthusiastic about learning and a lot of fun,” she said. “The faculty are all amazing and very welcoming.”

All four look forward to becoming more active in their school communities as time goes on. VanOverbeke will coach fourth-grade boys’ basketball, for example, and Early will be the assistant for the robotics team. McNally recently helped with the Harvest Festival at St. Mark School and has been approached to work with the student council. A distance runner, Wnorowski may be helping with girls track at Peoria Notre Dame.

Dr. Sharon Weiss, superintendent of Catholic schools for the Diocese of Peoria, has been following the Alliance for Catholic Education for many years and said, “Their research is state of the art. It’s first class, what they are doing for Catholic education.”

With their strong Catholic backgrounds, the teaching fellows are not afraid of public and personal prayer or religious formation. That is something they can bring into their schools right away, according to Weiss.

Randy Simmons, principal at Peoria Notre Dame, said Wnorowski has done “an outstanding job” adapting to her new surroundings and her first year of teaching.

“I often see her at daily Mass, in the morning, here at school,” he said. “We are very happy with Maria and lucky to have such a dedicated educator joining us this year at PND.”

“I feel we are blessed to have Erin at our school. You can tell that she really cares about what she does,” said Dr. Noreen Dillon, principal at St. Mark School.

Jill Templin, principal at Holy Family, noted the good rapport between the students and Early and VanOverbeke, and said they fit in well with the staff, too. “It’s a good experience for all of us.” 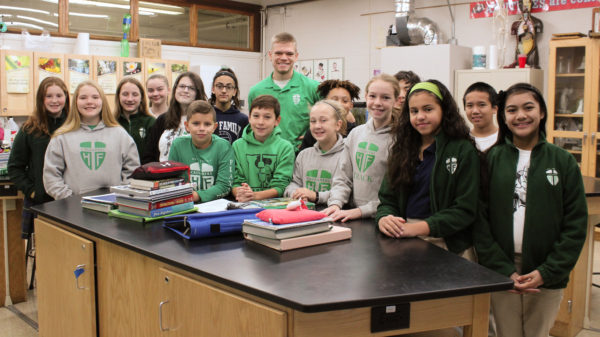 Brandon Early and his seventh grade science students at Holy Family in Peoria pause for a photo. (The Catholic Post/Jennifer Willems)