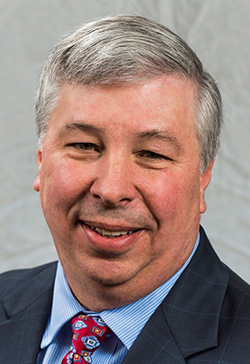 Robert Sehring has succeeded Kevin Schoeplein as the chief executive officer for OSF HealthCare in Peoria. He has served as chief operating officer for the ministry since January, working closely with Schoeplein to ensure a smooth transition.

Schoeplein retired after working with The Sisters of the Third Order of St. Francis for more than 39 years.

Sehring came to OSF in 2002 as vice president for business support services for OSF HealthPlans Inc., and was promoted to CEO of that organization in 2004. He has also served as CEO of ambulatory and accountable care for OSF. In 2013, he was appointed chief ministry services officer and was named CEO of the Central Region in February 2015.

“Our Sisters know OSF HealthCare is on the appropriate path to transform health care for the communities we have the privilege to serve under the leadership of Mr. Sehring,” said Sister Judith Ann Duvall, OSF, who chairs OSF HealthCare.

“The Sisters and the Sisters’ mission is my touchstone coupled with a fantastic leadership team,” Sehring said. “So having been chosen to help lead, help direct, help shape our future over the coming years is a wonderful opportunity that I’m looking forward to.”