Those who filled St. Mary's Cathedral in Peoria for the March for Mary raise their candles and sing as the statue of Our Lady of Fatima, which was carried throughout the church, returns to the sanctuary. Despite the rain that fell on the pilgrims during the march, coordinator Cecilia Soñé said the experience left her in awe. "The miracle of the sun would occur not as the 'sun' but the 'Son' in the holy sacrifice of the Mass." (The Catholic Post/Jennifer Willems)

If prayers for a sunny day went unanswered last Saturday, they may have been only a few of the petitions that weren’t during the March for Mary through the streets of downtown Peoria.

The event was the Diocese of Peoria’s culminating celebration for the 100th anniversary of the Blessed Mother’s appearances to three shepherd children at Fatima, Portugal, and took pilgrims about a mile and a half from St. Joseph Church to St. Mary’s Cathedral. 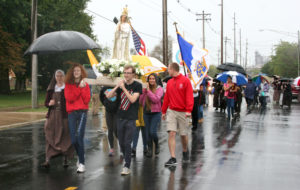 Leading the March for Mary from St. Joseph Church in Peoria to St. Mary’s Cathedral was a statue of Our Lady of Fatima carried by students from the St. Joseph Catholic Newman Center at Bradley University. They are (from left): Riann Kennedy, Jade Bailey and Christine Campbell. Jena Brooks (partially obstructed) is in the back, on the left side. They are accompanied by Sister Mary Amanda Howard, SCTJM, and Sam Mangieri, campus minister. (The Catholic Post/Jennifer Willems)

They prepared for the walk by spending time in adoration of the Blessed Sacrament and the sacrament of reconciliation at St. Joseph Church. By the time Mother Adela Galindo, foundress of the Servants of the Pierced Hearts of Jesus and Mary, gave her reflection on the Fatima message in Spanish and English, there were more than 500 people filling the pews, side aisles and vestibule of the church.

Joining the pilgrims at St. Joseph and taking his place in a golf cart at the front of the procession with the statue of Our Lady of Fatima was Bishop Daniel R. Jenky, CSC. He was offered the shelter of a car when the rain started as the March for Mary stepped off, but refused in favor of facing the same inclement weather as the people who came from around the diocese.

The group huddled under umbrellas or traveling in buses and cars to St. Mary’s Cathedral found still more people waiting for them there. The concluding Mass, celebrated by Bishop Jenky, included a candlelight procession with the statue of Our Lady of Fatima that ended with those present consecrating themselves to Mary.

“The Miracle of the Sun would occur not as the ‘sun’ but the ‘Son’ in the holy sacrifice of the Mass,” said Cecilia Soñé, director of respect life for the Diocese of Peoria and the coordinator of the March for Mary.

TO JESUS THROUGH MARY

“The authentic heart of a mother is always a home for her children,” said Mother Adela, and that is what Mary offered the world at Fatima.

The Blessed Mother’s heart is our refuge, but we only need refuge when we are in danger, she said.

“Our Lady came to Fatima as a mother and she will always come to tell us the dangers we are facing. She will come to give us the remedies for the dangers we are facing,” Mother Adela said, noting that the greatest peril is that which endangers the soul. “Our Lady wants to give us the remedies for our salvation and protect us from the evils of the world.”

One of the remedies the Blessed Mother prescribed at Fatima is praying the rosary daily for peace — peace for our world, peace for our hearts, peace for our families. Mother Adela called this “the greatest weapon” against evil. 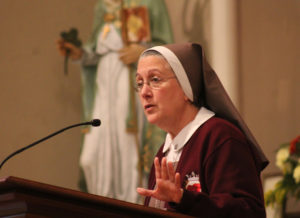 Mother Adela Galindo, foundress of the Servants of the Pierced Hearts of Jesus and Mary, offered a reflection on the Fatima apparitions before pilgrims ventured outside to walk from St. Joseph Church in Peoria to St. Mary’s Cathedral. The Blessed Mother’s promise at Fatima still holds true after 100 years, she said. “Our Lady will never leave us. Whatever situations we are in, whatever sadness we’re experiencing, Our Lady will never leave us alone.” (The Catholic Post/Jennifer Willems)

In 1917, when Mary appeared six times to Lucia dos Santos, 11, and her cousins Jacinta Marto, 7, and Francisco Marto, 9, at Fatima, Portugal, she also asked them to pray for the conversion of “poor sinners” and make reparation themselves. She entrusted to Lucia the mission of spreading devotion to her Immaculate Heart, a devotion Jesus wanted to establish.

Mother Adela reminded them that Mary promised those who embraced that devotion and her Immaculate Heart would be saved. “I will make sure they go to heaven,” the Blessed Mother assured the children.

In his homily, Bishop Jenky also spoke of Mary as a mother, given to the apostle John — and by extension all of us — at the foot of the cross.

“As a loving and attentive mother, in many places and in many eras, Mary has appeared to warn her children of present danger and to shelter them from future harm,” he said, adding that she always called for prayer, penance and continuing conversion, as she did at Fatima. 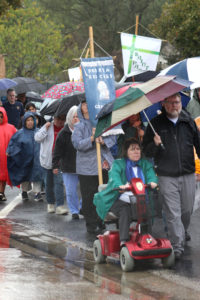 Representing the Peoria Diocesan Council of Catholic Women at the March for Mary were Kim Padan of Danville, president, who was accompanied by her husband, Bruce, and Alberta Fandel of Germantown Hills, who is carrying the DCCW banner. “This cheerful, bold testimony is so countercultural, but it is also the very thing we need in order to bring Christ to the World,” Padan said. (The Catholic Post/Jennifer Willems)

In her final appearance to the shepherd children on Oct. 13, 1917, the Blessed Mother was revealed as Our Lady of the Rosary and the Miracle of the Sun occurred.

“As the crowd gazed up into the dark skies, the sun suddenly appeared out of the gloom and then actually seemed to dance, spinning and turning and even changing colors,” Bishop Jenky reminded his listeners.

When the sun returned to its accustomed place, the people of Fatima rejoiced and miracles of healing were witnessed, he said.

“Mary always conforms, unites and consecrates us to her Son Jesus Christ. And so it may be that today we need the prophetic message of Fatima more than ever before,” Bishop Jenky said.

As it was in 1917, the world is fractured by war and enthralled by grievous sin, and there is widespread contempt for the faith, according to the bishop. “Perhaps our greatest temptation would be to simply give up our mission of Christian service and witness, and hide and surrender to our fears.”

Our shield against the lies of devil is the Word of God, that always tells the truth, and our “invincible weapon” is the atoning blood of Jesus, Bishop Jenky said. “Our reassurance is family prayer, especially the Most Holy Rosary.”

EDITOR’S NOTE: More photos from the March for Mary have been posted to The Catholic Post’s page on Facebook.