Next week is “a crucial step” in the beatification cause of Venerable Archbishop Fulton J. Sheen, said Bishop Daniel R. Jenky, CSC. In a letter to Catholics of the Diocese of Peoria dated Oct. 4, the bishop requested prayers for a favorable court ruling after a hearing in New York on Tuesday that could be “a great step” toward bringing the remains of Venerable Sheen to Peoria and advancing his beatification.

Following is the text of Bishop Jenky’s letter:

To the Priests, Deacons, Religious and Laity of the Diocese, 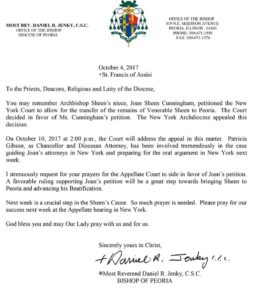 You may remember Archbishop Sheen’s niece, Joan Sheen Cunningham, petitioned the New York Court to allow for the transfer of the remains of Venerable Sheen to Peoria. The Court decided in favor of Ms. Cunningham’s petition. The New York Archdiocese appealed this decision.

On October 10, 2017, at 2 p.m., the Court will address the appeal in this matter. Patricia Gibson, as Chancellor and Diocesan Attorney, has been involved tremendously in the case guiding Joan’s attorneys in New York and preparing for the oral argument in New York next week.

I strenuously request for your prayers for the Appellate Court to side in favor of Joan’s petition. A favorable ruling supporting Joan’s petition will be a great step toward bringing Sheen to Peoria and advancing his Beatification.

Next week is a crucial step in Sheen’s Cause. So much prayer is needed. Please pray for our success next week at the Appellate hearing in New York.

God bless you and may Our Lady pray with us and for us.