When nearly 100 golden and silver anniversary couples renewed their marriage vows at St. Mary’s Cathedral in Peoria on Sept. 24, George and Judith Meisenbach of Bloomington — standing in a front pew — were the only ones not to voice “I do” to one another.

Both George and Judith, members of St. Patrick Church of Merna Parish who celebrated 50 years of marriage on Aug. 5, have been deaf since early childhood.

“My wife and I communicate without using voice,” George told The Catholic Post. “We are proud to be deaf. It is a gift,” said George, a former president of the Peoria Chapter of the International Catholic Deaf Association.

The Meisenbachs, who met at Northern Illinois University in DeKalb and were married at the Newman Center there, have been blessed with many gifts including two children — Mary, who was with them at the cathedral last Sunday, and Mark — as well as five grandchildren. All are fully hearing.

The couple is also grateful for new technology such as cochlear implants. Both George and Judith have small, complex electronic devices that bypass the ear drum and help provide them a sense of sound.

“We love it and get better communication,” said George, a Peru native who lost his hearing at age 6 following severe whiplash and then electric shock that damaged nerves. Judith, born in Chicago, lost her hearing because of illness.

“WE KNOW GOD LOVES US”

Accompanying the Meisenbachs to the Anniversary Mass was interpreter Janet Titus Boudreaux, who has signed for them at Mass at St. Patrick Church of Merna for nearly 15 years. While other couples gazed into one another’s eyes while renewing vows, George and Judith had their eyes fixed on Janet, who relayed to them the promises that Bishop Jenky was asking them to renew.

Their “I do’s” could be pretty much assumed anyway, given the Meisenbachs’ 52-year history. 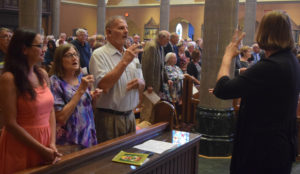 As their daughter Mary looks on at left, George and Judith Meisenbach take part in the Anniversary Mass with the assistance of signer Janet Titus Boudreaux. (The Catholic Post/Tom Dermody)

When they met at Northern Illinois University in 1965, both were in a job training program for the deaf. They would go to school in the morning and to a job in the afternoon.

While George was raised Catholic, Judith was Lutheran but became Catholic in 1966 at the Newman Center.

While some would view their marriage story as extraordinary, they described it in typical terms.  Technology, including a sound “flasher,” alerted them to cries when Mary and Mark were babies. And like most Catholic married couples, they faced challenges that came their way with prayer and loving persistence.

“We both can be misunderstood like hearing people,” said George. Sometimes disagreements could be traced to poor communication, in this case bad lip reading or sign language.

“We have had to discuss the problems face-to-face, and pray to God to take the trouble away,” said George. “We know God loves us.”

They return that love at Mass every Sunday. When they have their interpreter, the Meisenbachs do not use a missalette. While with the cochlear implants “we can hear almost everything,” the cry of babies in church and other background noises and echoes can prove confusing.

“We often go to confession, but only face to face,” said George. “We thank God for always giving us something new to learn.”