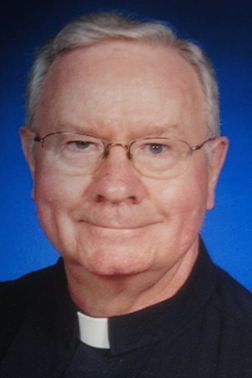 STREATOR — A Mass of Christian Burial will be celebrated at 11 a.m. on Thursday, Sept. 28, at St. Michael the Archangel Church here for Father William Arthur Ryan, 87, a senior priest of the Diocese of Peoria and former pastor of 11 of its parishes.

Father Ryan, a native of Streator, died on Sept. 23, 2017, at Manor Court assisted living in Peru.

Visitation is scheduled from 9 to 11 a.m. on Thursday at St. Michael the Archangel Church.

Born in Streator on April 29, 1930, he was the youngest son of John and Alice (Whalen) Ryan. Father Ryan attended St. Mary School in Streator and was a 1948 graduate of Streator High School.

Following two years of study at St. Ambrose College in Davenport, Iowa, and earning a bachelor’s degree in philosophy from The Catholic University of America in Washington, D.C., he served in the U.S. Army from 1952 to 1954, and was a veteran of the Korean conflict.

Father Ryan completed his studies for the priesthood at St. Paul Seminary in St. Paul, Minnesota, and was ordained a priest of the Diocese of Peoria by Archbishop William E. Cousins on Aug. 2, 1959.

In 1979, he began four years of service as co-pastor of St. Patrick, Ottawa, followed by five years as pastor of Sacred Heart, Rutland, and St. Joseph, Flanagan.

Father Ryan was chaplain of St. Joseph Nursing Home in Lacon from 1988 to 1991, at which time he became parochial vicar at St. Vincent de Paul, Peoria. His final assignment – as pastor of St. Patrick, Ransom, and St. Mary, Grand Ridge – would prove to be his longest. He served those faith communities for eight years until being granted senior status in 2000.

Interviewed by The Catholic Post in 2009 as the 50th anniversary of his priesthood ordination approached, Father Ryan cited his parents’ love for the Mass as an influence on his vocation, as well as “my whole family background.” Two of his aunts entered the religious life, and his brother Frank was ordained to the priesthood a year ahead of him.

“I’ve been in a good many parishes,” Father Ryan acknowledged in that interview. “It’s marvelous to see the people of God and they’re good people everywhere you go.”

He was preceded in death by his parents, and by siblings John Ryan, Edward Ryan, Helen Ganey, Betty Salmon, Mary Laidig, and Father Frank Ryan. He is survived by many nieces and nephews scattered across the country.

Memorials may be made to St. Michael the Archangel School in Streator, and online condolences may be left for the family at solontelford.com.