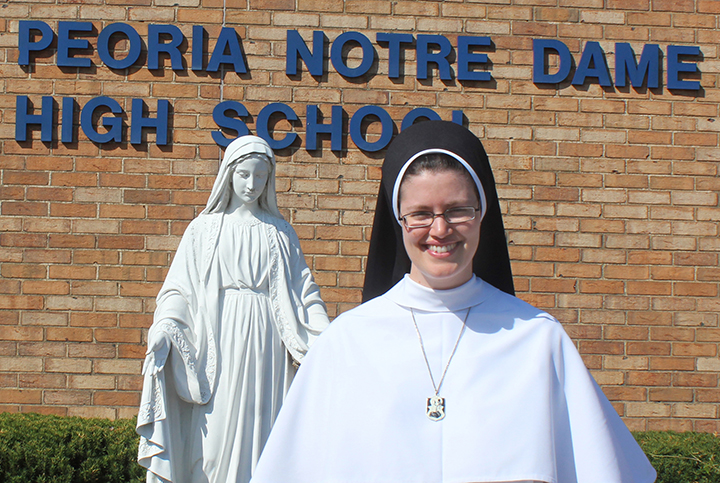 After eight years of prayer, discernment and study, Sister Maria Suso Rispoli, OP, professed her final vows with the Dominican Sisters of Mary, Mother of the Eucharist. The Mass took place at Christ the King Church in Ann Arbor, Michigan, on July 25.

Shortly after making her perpetual profession, Sister Maria Suso traveled to Peoria to join the Dominican community at St. Jude Church and begin her new ministry as a biology teacher at Peoria Notre Dame High School.

Born in Clearwater, Florida, Sister Maria Suso became interested in religious life at 14, when she was preparing for confirmation. She received a Bible and Catechism of the Catholic Church and started to think deeply about her faith.

“I was putting all of my focus on myself and my friends. I guess I was following my friends in things that were not going to lead me to God,” she told The Catholic Post. “I realized that when I started reading the Bible and I encountered Christ in a real way and realized how much he loved me.”

At confirmation, she was moved to say to the Lord, “I really feel like I’m supposed to give my life to you and I don’t know what that means.” She found out by talking to a Sister, reading about different religious communities, and spending more time in prayer and eucharistic adoration.

While attending Florida State University, Sister Maria Suso made a retreat with the Dominican Sisters of Mary, Mother of the Eucharist and felt at home.

“I realized what I wanted was to seek the truth and lead others to the truth. That’s very Dominican,” she said. “Everything sort of fit. I felt like this was the way to be happy.”

She earned a bachelor’s degree with a double major in English and religion, and in 2009 she entered the Dominican community, knowing “God wants my joy” and feeling certain that “God made me for this.”

Formation includes a year of postulancy and two years as a novice. After taking first vows, the Dominican Sisters typically renew after two years and again after three years before making a perpetual profession.

She said taking her final vows has been “such a great grace for me.”

“I’m very grateful to the Lord that he would deign to make me his bride, because I know I’m not worthy of that,” she said. “It’s such a beautiful life.”