‘God’s Handprints’ are all over her story of adoption, now shared in book form 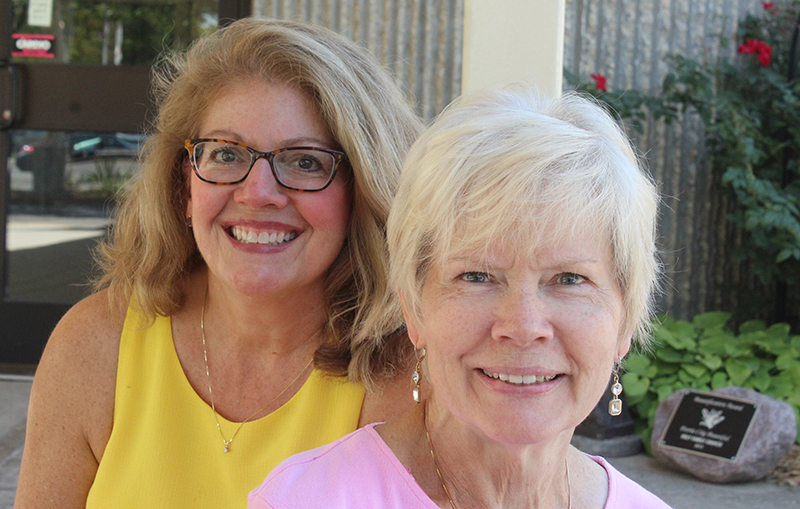 Ann Williams' story of unplanned pregnancy, choosing life and adoption for her twin sons, and eventual reunion with them is told in a new book "God's Handprints: A Story of Faith, Hope and Love" written by her niece, Bridget Nelan, left. (The Catholic Post/Jennifer Willems)

Ann Williams knows what it’s like to be a pregnant, unmarried college student who is desperately trying to make the best decision possible when none of the options seems all that good. She chose life for her twin sons and a better life than she could give them by placing them for adoption.

The Peoria woman hopes to help others by sharing what she has learned in a new book, “God’s Handprints: A Story of Faith, Hope and Love.” Written by her niece, Bridget Nelan, it was published by WestBow Press in July, near the date she gave birth to the twins 45 years ago. 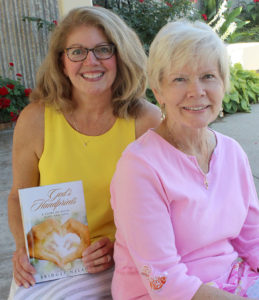 Bridget Nelan and Ann Williams will sign copies of “God’s Handprints: A Story of Faith, Hope and Love” at Lagron-Miller in Peoria from 11 a.m. to 1 p.m. on Saturday, Sept. 30. (The Catholic Post/Jennifer Willems)

“If a woman or a girl finds themselves in this situation, they think of two possibilities. They think of having an abortion or keeping the baby,” said Williams, a member of Holy Family Parish in Peoria. “You need to consider that third choice.”

And in the end it turned out to be a gift for her, too. The twins were raised together on a farm near Mason City with two younger brothers and entered the Army together. She was reunited with them nine years ago and is grateful to have them and their extended family in her life.

“IT WAS A BLESSING”

Williams told her story to The Catholic Post six years ago, and shared it with her Cursillo family, as well. People started telling her she needed to write a book.

“I’m not a writer,” the longtime teacher and math tutor said.

Her niece is, however, and when Nelan said, “Let me be your ghostwriter,” Williams accepted.

“I just want you to journal,” Nelan told her aunt, and before she knew it, Williams had filled a legal pad.

There were also tears, she admitted. “But sometimes tears can be cleansing, too.”

Nelan continued to gather information by talking with Williams, sending more questions by email for her to answer, and doing interviews. Sometimes the process was delayed, such as when the twins, Robb and Todd, now high-ranking officers in the Army, were deployed overseas.

The book is not written in chronological order, but divided into chapters by topic that include parts of Williams’ life. One is devoted to “gifts,” while another covers “forgiveness,” for example.

Nelan takes no credit for what was written, saying the words were “divinely placed on the paper” due to her trust in the Holy Spirit.

“The glory is to him and we wanted to be sure there was nothing that would make anyone feel anything but God’s mercy,” she said, emphasizing there is no judgment directed at anyone. “There’s just hope and love and mercy.”

The title came to Williams when she was talking to her Cursillo group about her unplanned pregnancy, seeming loss, and eventual reunion with her sons. “Ann, God’s handprints are all over your story,” one of the women told her.

“That just touched me so deeply,” Williams said. “I decided right then and there, if this ever makes it to a book I think I’d like this to be the title of it. And sure enough, it was.”

“It’s a beautiful, beautiful story,” said Nelan, a member of St. Vincent de Paul Parish in Peoria. While she has written for Focus on the Family publications online and in print, this is her first book.

In addition to the twins, Williams raised two sons with her first husband. Kevin, 39, lives in Peoria with his wife and two children. Jeff, 38, works for Morton Buildings in Naperville.

Williams is married to Lee Williams, a Fourth Degree Knight of Columbus and manager of the Knights of Columbus Hall on Radnor Road in Peoria. She will be speaking about her book and signing copies at the ladies’ luncheon at the organization’s state convention in December.