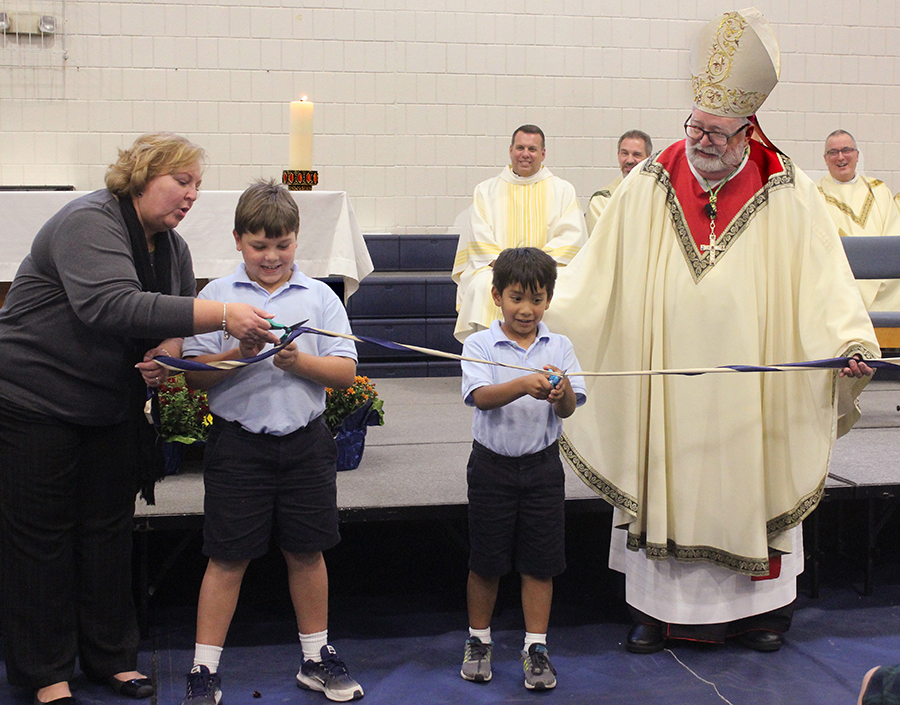 BLOOMINGTON — A dream many years in the making came true Aug. 30 when the students, faculty, and families of Corpus Christi School came together to celebrate the completion of the new junior high wing. Bishop Daniel R. Jenky, CSC, joined them for Mass in the school gym.

The $1.6 million addition unites the school, bringing the students in sixth, seventh and eighth grades from the campus at 705 N. Roosevelt St., to the building that had previously housed the preschool and elementary grades alone at 1909 Lincoln St. The wing includes a new science lab, plenty of storage space, and two more restrooms.

Excitement filled the air just before the end of the liturgy as intertwined blue and gold ribbons — held by Gwenn Roche, principal; Dr. Sharon Weiss, superintendent of schools for the Diocese of Peoria; and Bishop Jenky — were cut by Nicholas Weisiger, fourth grade, and his brother Martin, kindergarten. Christopher and Katrina Weisiger had purchased the opportunity for their family to cut the ribbon at last year’s Fall Ball and Auction. 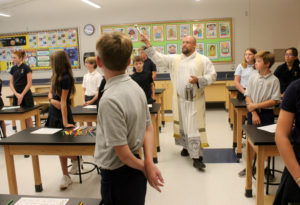 “May the expansion of this school lead us to a deepening of faith in our young people,” he said. “We ask that those entrusted with the education of the young in this institution may teach their students how to join the discoveries of human wisdom with the truth of the Gospel so they will be able to keep the true faith and live up to it in their lives.”

The bishop also prayed that the students would find in their teachers the image of Christ, “so that enriched with both human and divine learning they will, in turn, be willing and ready to enlighten and assist others.”

After Mass, the students returned to their homerooms, while Bishop Jenky toured the new junior high wing, peeking into classrooms and joking with the students. He was accompanied by the priests serving in the parishes that support Corpus Christi School.

They sprinkled holy water throughout the addition and then continued to each classroom in the building.

The master of ceremonies was Father Dustin Schultz, pastor of St. Patrick Church of Merna, Bloomington, and St. Mary, Downs. 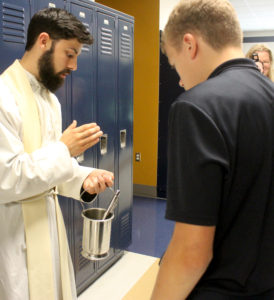 “Many years ago, this was an idea. People thought, ‘Hey, there are two different campuses. Let’s have both these schools together,’” Father Schultz said. “Things stopped being an idea and started being an action when Father Greg was assigned to St. Patrick of Merna.”

Not only did Msgr. Ketcham encourage them to proceed, he foresaw that the new wing would be completed in time for the 2017-18 school year.

“Praised be Jesus, look at us now, with a school that’s open right when Father Greg said it would be,” Father Schultz said, thanking his predecessor for “pushing the ball and getting it going.”

Also receiving a sustained round of applause was Roche, who kept the ball rolling by putting in a “tremendous amount of work,” according to Father Schultz.

He would go on to acknowledge the school’s education commission, the Office of Catholic Schools for the Diocese of Peoria, the architects from the Farnsworth Group, the general contractors from Johnco Construction, and the teachers and staff for their input, cooperation and patience. “This project could not have been done without all of your support.”