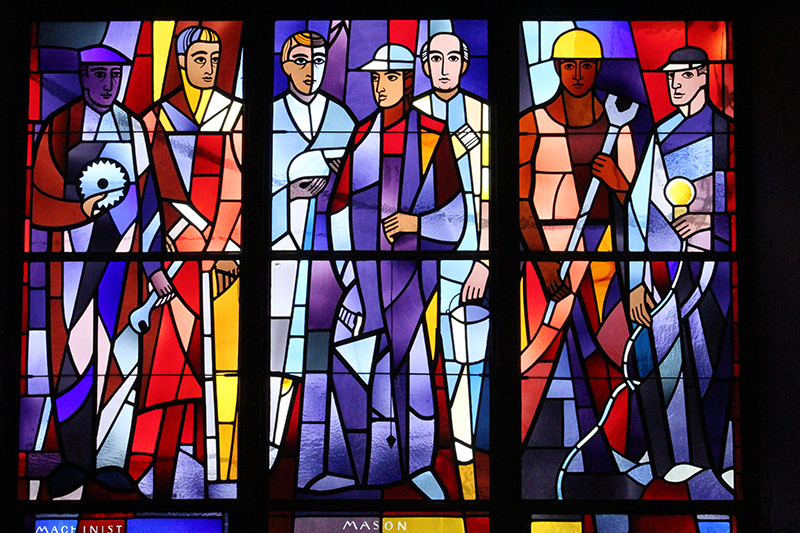 In the message, Bishop Dewane cited the words of Pope Francis, who told factory workers in Genoa, Italy, “The entire social pact is built around work. This is the core of the problem. Because when you do not work, or you work badly, you work little or you work too much, it is democracy that enters into crisis, and the entire social pact.”

Bishop Dewane, chairman of the U.S. bishops’ Committee on Domestic Justice and Human Development, pointed to a “twisted understanding of labor and laborers” that fosters deepening inequality.

In Genoa, the pope “acknowledges that ‘merit’ is ‘a beautiful word,'” Bishop Dewane said, “but the modern world can often use it ‘ideologically,’ which makes it ‘distorted and perverted’ when it is used for ‘ethically legitimizing inequality.'”

“Wages remain stagnant or are decreasing for the vast majority of people, while a smaller percentage collect the new wealth being generated. Economic stresses contribute to a decline in marriage rates, increases in births outside of two-parent households and child poverty,” Bishop Dewane added. “Economic instability also hurts the faith community, as Americans who have recently experienced unemployment are less likely to go to church, even though such communities can be a source of great support in difficult times.”

He said, “When a parent — working full time, or even working multiple jobs beyond standard working hours — cannot bring his or her family out of poverty, something is terribly wrong with how we value the work of a person.”

“Pope Francis has said it is ‘inhuman’ that parents must spend so much time working that they cannot play with their children. Surely many wish for more time, but their working conditions do not allow it.”

“A culture that obsesses less over endless activity and consumption may, over time, become a culture that values rest for the sake of God and family,” Bishop Dewane said.

He added, “Our Lord’s ‘gaze of love’ embraces men and women who work long hours without rest to provide for their loved ones; families who move across towns, states, and nations, facing the highest risks and often suffering great tragedy in order to find better opportunities; workers who endure unsafe working conditions; low pay and health crises; women who suffer wage disparities and exploitation; and those who suffer the effects of racism in any setting, including the workplace.”

“Worker-owned businesses can be a force for strengthening solidarity, as the Second Vatican Council encouraged businesses to consider ‘the active sharing of all in the administration and profits of these enterprises in ways to be properly determined,'” he said. “The Catholic Campaign for Human Development has helped in the formation of many employee-owned companies which provide jobs in communities where work opportunities may be scarce.”

Workers’ legal rights to “a just wage in exchange for work, to protection against wage theft, to workplace safety and just compensation for workplace injuries, to health care and other benefits, and to organize and engage in negotiations, should be promoted,” he added.

“Workers must be aided to come to know and exercise their legal rights. As an example, CCHD has supported the Don Bosco Workers in Westchester, New York, which has launched a successful campaign to combat wage theft. Persons returning from prison also need support to understand their legal rights as they seek new employment. CCHD has helped the Society of St. Vincent de Paul in Cincinnati and elsewhere as they work with returning citizens to find stable and meaningful jobs.”

Labor unions play an important role in this effort, according to Bishop Dewane, as he quoted from Pope Francis’ remarks in June in an audience with delegates from the Confederation of Trade Unions: “There is no good society without a good union, and there is no good union that is not reborn every day in the peripheries, that does not transform the discarded stones of the economy into its cornerstones.”

“Unions must retain and recover their prophetic voice, which ‘regards the very nature itself of the union, its truest vocation. The union is an expression of the prophetic profile of society,'” he said, quoting further from Pope Francis, who added, “The union movement has its great seasons when it is prophecy.” Bishop Dewane added that unions should “resist the temptation of becoming too similar to the institutions and powers that it should instead criticize.”

Bishop Dewane said, “Unions are especially valuable when they speak on behalf of the poor, the immigrant, and the person returning from prison.”