BLOOMINGTON — As he did in life, St. John Paul II continued to inspire people to pray and draw closer to Jesus when a first class relic, a vial of his blood encased in a Book of the Gospels, was brought to the Bloomington-Normal area on Aug. 18.

At the Newman Center that bears his name at Illinois State University in Normal, students and visitors had three hours to venerate the pilgrim relic, which has been entrusted to the Servants of the Pierced Hearts of Jesus and Mary. Two members of the religious community, Sister Silvia Maria Tarafa and Sister Clara Maria Malay, serve as director and assistant director of the St. John Paul II Catholic Newman Center, respectively. 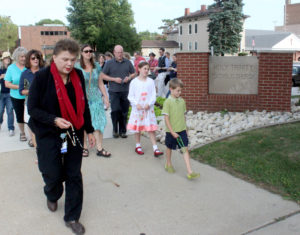 Later in the day, the relic was taken to Holy Trinity Church in Bloomington, where Mass was celebrated by Father Geoffrey Horton, parochial vicar. Concelebrating was Father Jeffrey Stirniman, the new parish administrator.

The Mass was preceded by a rosary walk around the church and followed by several more hours of veneration.

At each church or chapel to which the relic was taken, the Servants of the Pierced Hearts assisted people in touching their prayer books, holy cards, rosaries, scapulars and even wedding bands to the saintly pope’s relic. At times they joined hands with persons in need of special prayer as those men and women rested their hands on it. In one case they lifted the relic to the forehead of a woman who was suffering a severe migraine and prayed for her.

“Perhaps you came here this evening because there was something in your heart that you want Pope St. John Paul II to obtain for you,” Father Horton said in his homily. “Because the church recognizes him as an outstanding example of holiness, we can be confident in asking for his intercession.”

Father Horton said that while St. John Paul II is rejoicing now in the company of God and needs nothing from us, there is still something we can do for him.

“I know what it is that he asked of us as he assumed the office of pope and I’m confident he never changed his mind,” Father Horton said. In his first homily, St. John Paul II said, “Brothers and sisters, do not be afraid to welcome Christ and accept his power.”