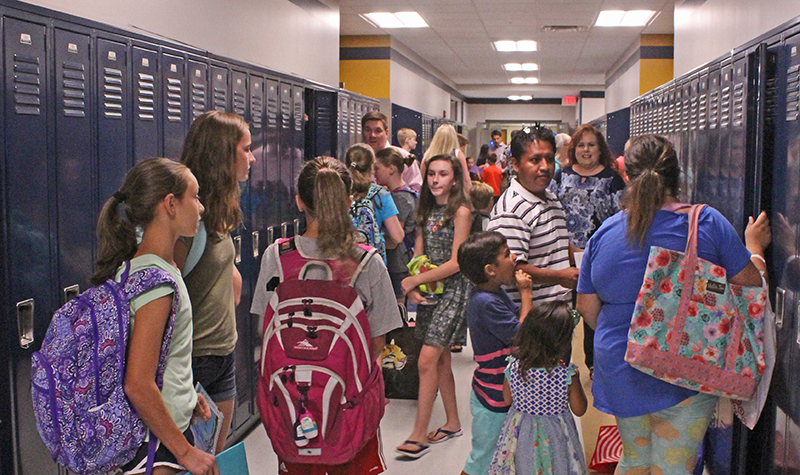 BLOOMINGTON — “One School, One Family.”

That’s more than a theme for this new academic year at Corpus Christi Catholic School. It’s an exciting new reality as the grade school and junior high school are located in the same building for the first time.

Construction on the 8,500-square-foot junior high wing was completed in July and the teachers moved in before the month was out, according to Gwenn Roche, principal. The sixth- , seventh- and eighth-graders got a chance to explore the six new classrooms and dedicated science lab on Aug. 10, when they met their teachers, unpacked their school supplies and filled their lockers. 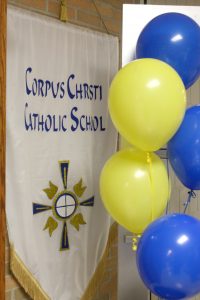 “I told someone it was almost like having a new baby,” said Gwenn Roche, principal, as she greeted the students and their families. “It’s so full of expectation and promise and you’ve waited seven or eight months for this to happen and now it’s here.”

The celebration will continue on Wednesday, Aug. 30, when Bishop Daniel R. Jenky, CSC, joins the students, faculty, staff and parishioners for Mass. Following the liturgy, classrooms throughout the building will be blessed.

Ground was broken for the new wing on Sept. 23, 2016. Construction started Oct. 1, with Johnco Construction Inc. as the general contractors. It was designed by architect David Leggans of the Farnsworth Group. Roche praised them for bringing the project in on time and within the $1.6 million budget.

“It’s going to make everything better,” said Sarah Pilcher, who was helping her son, Thomas, a sixth-grader, get his locker ready Aug. 10. “It’s more convenient. I just think it’s going to make the school feel more like a family environment, having everyone under one roof.”

Kelly Sims, who has taught English language arts in the junior high at Corpus Christi and its predecessor, Holy Trinity, for 36 years, says she’s looking forward to watching that “family” grow up in the years to come.

“It’s like a big family because now I get to see the little ones,” she said. “I’ll get to see them for 10 years, from preschool all the way up through eighth grade.”

While leaving the former junior high building at 705 N. Roosevelt St. made her “nostalgic,” Sims said, “I couldn’t be happier.”