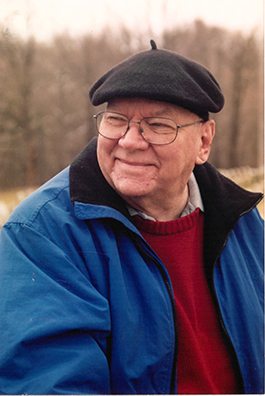 A funeral Mass will be offered at St. Mary’s Cathedral in Peoria at 10 a.m. on Saturday, Aug. 26, for Gerald L. “Jerry” Klein, whose “It Seems to Me” column has appeared in The Catholic Post since 2009.

Visitation is planned from 4 to 7 p.m. on Friday night at Wright and Salmon Mortuary, 2416 N. North St. in Peoria, with recitation of the rosary at 6:30 p.m. Additional visitation will be from 9 to 10 a.m. on Saturday at St. Mary’s Cathedral.

Burial will be at St. Mary of Lourdes Cemetery in Germantown Hills.

Born Dec. 19, 1926, in Peoria to Erwin and Louise (Lucille) Lammers Klein, he was raised in St. Bernard Parish in Peoria and is a graduate of Spalding Institute’s Class of 1944. He then joined the U.S. Navy, serving aboard an escort aircraft carrier in the Pacific.

He earned a music degree from Bradley University, then did post-graduate work at the University of Illinois prior to joining the staff of the Peoria Journal Star as an editorial writer. He soon became the newspaper’s fine arts critic and columnist with a career spanning more than four decades.

He married the former Mary Dudas on June 4, 1955, at St. Bernard Church in Peoria. The Kleins had seven children and were approaching their 60th anniversary when Mary died on Jan. 13, 2015.

His first column for The Catholic Post — published on March 15, 2009 — was headlined “Back in the saddle again” and the column soon became a fixture on our commentary pages.

“The Catholic Post was blessed to share the faith and wisdom of this beloved wordsmith,” said Tom Dermody, editor of the diocesan newspaper, in comments preceding selected excerpts from Klein’s columns appearing below this obituary. “We will miss him, but are deeply grateful to God and Jerry’s family for sharing him with us this past decade.”

He is survived by seven children: Jerry (Linda) of St. Louis; Jeff (Rita) of Blacklick, Ohio; Lisa (Rob Reed) Klein of Columbus, Ohio; Marilou (Paul) Moore of Metamora; Jim of Galena, Ohio; Jeanne of Medford, Oregon; and Barbara of Asheville, North Carolina, as well as nine grandchildren and 10 great-grandchildren. He is also survived by a sister, Sister Sue Klein, OP, of St. Petersburg, Florida, and a brother, Edward, of Peoria. One brother, Richard, preceded him in death.

Memorials may be made to the Family Resources Center of the Diocese of Peoria or the Alzheimer’s Association.

Farewell to a beloved wordsmith and friend

The news of Jerry Klein’s death on Aug. 21 sent us paging through the nine years that The Catholic Post was blessed to share the faith and wisdom of this beloved wordsmith. It was a labor of love and deep respect.

Jerry had favorite topics he would often explore — the beauty of marriage, his distrust of gadgets, his love for the Blessed Virgin Mary, the tragedy of abortion, the politics of the day, the challenge of aging, the mystery of heaven, and the beauty of each passing month and season.

We hope the excerpts we have culled from the nearly 200 columns he penned for us, though hastily compiled, are a worthy reflection for the friend who was a gift to our staff and our readers. We will miss him, but are deeply grateful to God and his family for sharing him with us this past decade. — Thomas J. Dermody, editor, The Catholic Post

“I will often express strong opinion and not tasteless pabulum or empty preaching. I hope you will find my opinions, my observations, my reflections readable, above all, and a little bit provocative.” (“Back in the Saddle Again,” Post debut column, March 15, 2009)

“I like to think that it is always a May morning in heaven, a soft breeze brushing the cheek and sighing amid the new-green leaves, all of it crowned with a cloudless, Mary-blue sky and off there somewhere the faint echo of those old Marian songs . . . ‘On this day, oh beautiful Mother.’” (May 2009)

“Those whose public actions further the culture of death do have a place in the church, but it seems to me that it ought to begin with the confessional. And somehow I don’t think that ‘I’m personally opposed to abortion, but . . .’ will quite cut it.” (May 2009)

“God does not announce himself with hurling thunderbolts or angry seas, but in the eyes of a new baby, in the staggering beauty of a winter sunset, in the soft breeze of May, in the stillness of a snowy night. We don’t need to see water changed into wine or a paralytic cured at Lourdes or the blind made to see. All we need do is open our eyes, our ears, our minds and rid ourselves of the petty distractions and there, in the silence, all around us, is the very voice of God.” (November 2009)

“Someone surely had to put this incredible universe into place so that the tides flow and ebb on a precise schedule, that the earth turns just so at the arrival of spring and fall, that the planets are secure in in their orbits and do not crash into one another, or that the sun does not burn us up like overdone french fries. Someone, too, had to assure us that there is a meaning and a purpose to all this.” (October 2010)

“Marriage is not a piece of paper or a pledge, but a sacrament in which two people are joined together in a mystical and physical union separable only by death. Words may not change the world. But two of them, repeated with conviction, can restore integrity to our families, our society, our civilization. They form the shortest pledge with the longest results: ‘I do.’” (January 2011)

“Our society seems to be burdened with an inability to follow worthy role models. Instead, we elevate people who are essentially notorious for one reason or other. They act, they sing (or scream into the microphone), they write revolting plays, they tell dirty jokes and we applaud and howl with laughter. Who will lead us out of the wilderness and away from our obeisance to these false gods, these empty celebrities?” (April 2011)

“No prayer is ever wasted. Nor does it go unanswered. There are more people listening to our prayers than we imagine — God, of course, and saints, angels, friends, some here and some already gone. And we hope that when we arrive at our inevitable destination, those we prayed for will be there and tell us, “Hey, good job,” “Welcome,” and “We’ve been waiting for you.” (February 2012)

“The church is not a democracy. It was never intended to be so ruled. It is rather a monarchy, perhaps even a benevolent dictatorship. We don’t get to vote on who our bishop will be or what priest will be pastor of our parish. We don’t get to change the church’s teaching on premarital sex, on abortion, on adultery. Unlike just about every other denomination, the Catholic Church offers a take-it-or-leave it proposition to its members.  I hate to contemplate what the church might become if it were governed, or even unduly influenced, by public opinion polls or popular votes.” (March 2012)

“We may live a month or a hundred years. But unlike the fate of our belongings, we take along with us our works and our deeds, our failures and our successes, our memories, our pasts, our sins, the hatred or the love we have nourished, indeed, the whole package, good, bad, or indifferent.” (May 27, 2012)

“I sure do want Jesus and his mother to know who I am when the pills stop working, when there is an empty seat in the doctors’ waiting rooms, and the morning paper takes notice of the fact that I am no longer here. Then I hope to hear familiar voices. And especially one that I hope will say, “Hi Jerry. It’s Jesus.” (May 2012)

“So here is September, one of the treasured months of our year, scuffling through the leaves along a city sidewalk, greeting the morning with a low-lying milky fog in an orchard brimming with golden apples, lazing through a long afternoon.” (September 2012)

“We are not meant to be perfect. We become bald and shaky over the years, our steps uncertain, our memory cloudy. And God loves us, not because we are strong and upright, but because we are weak and fallible and we depend not on ourselves, but on Him who made us as we are.” (April 2013)

“The possibilities for instant communication are endless and fascinating. True, we can reach out and touch people all over the world. But nothing yet invented comes close to the old-fashioned connection that occurs when we meet one another face-to-face, which might be a hint of what it will be like when we meet God Himself, face-to-face.” (February 2014)

“We have been conditioned to the idea that we must not inflict our beliefs on anyone else. Bad form, you know. Don’t want to proselytize, or offend anybody. The result is that everybody else has been inflicting their belief on us.” (August 2014)

“We are in our lifetimes several different people and it is unlikely we should be judged on a single one of them or on a single year or a single incident.” (October 2014)

“If anyone needs to be assured there is more love than hate in the world, there is powerful evidence in the days surrounding the death of a loved one. Cards flow in, donations for Masses, prayers, phone calls, expressions of sympathy and compassion from people one has not seen in years or perhaps has never seen until one is virtually blanketed in an outpouring of love that breaks like the surf against the gates of heaven itself.” (January 2015, following the death of his wife, Mary.)

“Our language is in danger. In the digital culture there is no room for the extraneous word. Even the poetry of love has been reduced to a simple “Luv Ya.” It is perhaps time to loft a Hail Mary (HMFOG) pass into the end zone and hope, and pray, that this slow destruction of our language does not make gibbering illiterates of us all.” (April 2015)

“So incessant have been the cries for change that we have abandoned that which ought to be treasured, such as the family. Many people are uncertain over who they are, what they are doing here, why they were created, which bathroom they should use. The old Baltimore Catechsim, which remains unchanged, has the answer if only we will listen: ‘God made us to know Him, to love Him and to serve Him in this world and to be happy with Him forever in the next.’” (May 2016)

“You deserve to be heard. And so do we.” (May 21, 2017, the final words of his last published column in The Catholic Post, in which he asked priests to address bad acoustics in churches.)