Erin Whyte helps her 9-month-old daughter, Gianna, to touch the pilgrim relic of St. John Paul II, a vial of his blood encased in a Book of the Gospels, at Our Lady of Guadalupe Church in Silvis on Aug. 16. Erin and Matt Whyte and their three children belong to St. Catherine Parish, Prophetstown, in the Diocese of Rockford. (The Catholic Post/Jennifer Willems)

SILVIS — The first thing people see when they enter Jean McGuinty’s house is “a great big picture” of St. John Paul II — and several little ones, too.

“I’ve always had tremendous respect and admiration for him,” said McGuinty, a member of St. Pius X Parish in Rock Island.

She was one of several hundred people who filled Our Lady of Guadalupe Church in Silvis Aug. 16 for Mass and the opportunity venerate a relic of the saintly pope — a vial of his blood, encased in a Book of the Gospels. Those gathered prepared for the liturgy by singing the Chaplet of Divine Mercy and prayed the rosary while everyone came forward to kiss or touch the relic and receive a holy card. 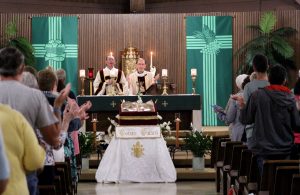 Father Duane Jack celebrates Mass at Our Lady of Guadalupe Church in Silvis for those who came to venerate the pilgrim relic of St. John Paul II, which rests in front of the altar. He said it was appropriate to come together this way, since the saintly pope lived his life from the Eucharist and gained inspiration and strength for his ministry there. Deacon Matthew Levy assisted at the liturgy. (The Catholic Post/Jennifer Willems)

The pilgrim relic has been entrusted to Mother Adela Galindo, foundress of the Servants of the Pierced Hearts of Jesus and Mary, to bring on pilgrimage to the American continent. She is traveling with it on an eight-stop tour in the Diocese of Peoria, as are members of her community, including several who minister in the diocese.

There have been one or two unscheduled stops, as well. In Silvis, for example, Father Peter Zorjan, became ill and so the Servants of the Pierced Hearts took the pilgrim relic to him in the hospital. He sent his greetings to his parishioners and visitors at Our Lady of Guadalupe, promising to pray for them while they were at Mass.

Standing in for Father Zorjan was Father Duane Jack, a senior priest of the Diocese of Peoria living in Silvis. He said it was appropriate to honor the relic of St. John Paul II after gathering around the altar.

“Pope St. John Paul II lived his life from the Eucharist,” Father Jack said. “He gained his inspiration there. He gained the strength of his ministry there. He allowed the Holy Spirit to form and shape his life.”

There are many treasures in our lives, Father Jack said, starting with Jesus, “our intercessor and Savior before the Father without end.” He also listed the Holy Spirit, sacred Scripture and the sacraments.

“We also have very special people who pass through this world, great treasures to be recognized. John Paul II certainly was one of them” Father Jack said, describing him as a man who came from humble beginnings, but who allowed the Spirit and the gifts of the Spirit to flow through him.

“And just look at what he accomplished, not just on this earth in his human way of living, but also in his saintly way of living,” said Father Jack. “I hope that each one of us can carry something away from tonight, so the life of this man does have an impact on our lives.”

EDITOR’S NOTE: More photos from the relic’s stop in Silvis can be viewed on The Catholic Post’s site on Facebook.