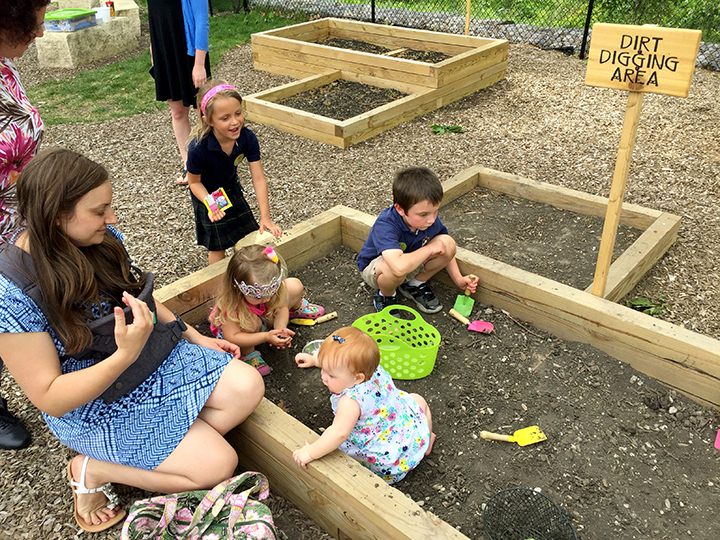 Preschool pupils and their siblings enjoy the opportunity to dig in the dirt in the new outdoor classroom at Epiphany Catholic School. (Provided photo)

NORMAL — Digging in the dirt. Rearranging blocks of wood and pieces of tree trunks. Walking a balance beam. Playing a large wooden xylophone. Climbing from one platform to another. Getting up close and personal with insects. This may look like play, but there’s some serious learning going on in the new Nature Explore Classroom at Epiphany Catholic School.

“The biggest benefit, for me, is that they have to use their imaginations, so it can go in any direction,” said Bridget Lanham, director of the school’s Kathryn Marie Albee Early Learning Center, and a pre-kindergarten teacher there. 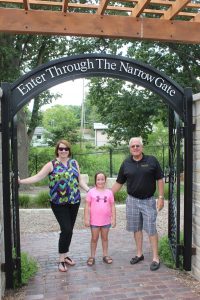 “And while they’re exploring they’re learning so much I could never tell them,” she said. “They’re picking up on different things. It’s been really fun for them and for us.”

Principal Mike Lootens said Lanham was instrumental in guiding the development of the outdoor classroom, an idea that grew out of the 2010 renovation of the church and construction of the early learning center. It was put on hold for a short time, but was revived in 2014 when Nature Explore Classroom designers were invited to visit Epiphany and draft a plan.

It was revised the following year to resolve drainage issues, and construction started in 2016. The outdoor classroom was completed in time for students to start using it last spring.

Over the summer, the outdoor classroom received national certification from Nature Explore, a collaborative program of the Arbor Day Foundation and Dimensions Educational Research Foundation. This makes Epiphany part of a network of more than 380 outdoor learning centers.

Located just steps from the doors to the early learning center, it is set apart by a wrought iron fence. Students, teachers and families may gain access through a gate, locked when the classroom is not in use, that bears the inscription, “Enter Through the Narrow Gate” (Matthew 7:13).

It is designed primarily for children in pre-kindergarten through third grade, but the space has a gathering area and a music and movement area that can easily be used by older students for activities such as reading or performances, according to Lootens.

In addition to a large gathering area and the stage for movement exercises and music making, the outdoor classroom includes areas for nature art, building, dirt digging, climbing, and “messy materials.”

Lanham said when she told her young students they could dig in the dirt and offered them trowels and bowls to make mud pies, they looked at her funny.

“I told them, ‘Yes, this is the space for it, but I don’t want you to dig in other areas where plants are growing,’” she said. “It’s fun to watch. They love it.”

In terms of safety, none of the surfaces in the outdoor classroom are higher than 18 inches, and the paths are covered with engineered wood fiber. Lanham said this is softer and provides more of a cushion than traditional mulch if the little ones fall. 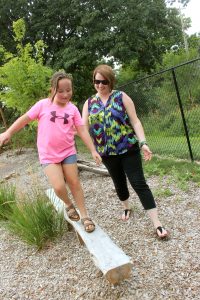 Bridget Lanham spots Celia French as she tests her agility on the balance beam. (The Catholic Post/Jennifer Willems)

So what are they learning?

“The things that are out here are incredibly simple and it makes them think, ‘What can I do with this?’ Instead of me answering that question, I don’t answer it,” Lanham told The Catholic Post. “I ask, ‘Well, what do you think you can do with this?’”

Some of the boys took the tree trunk discs and made a path, while others used a thick stick and two of the smaller pieces of wood to make a catapult.

“Those are things I could never create in a normal classroom,” Lanham said.

The children also benefit from having all of their senses engaged. Hearing leaves rustling in the wind, birds singing and insects chirping may be more calming than the ticking of a clock in a silent classroom for some, she explained.

“We’re so technological anymore. We’re stuck in front of computer screens in classrooms and our kids aren’t getting out as part of their day,” he said. “They spend a third of their lives with us. Maybe part of that third can be nature and exploring what we have.”

For Msgr. Powell, spirituality remains the context for everything. 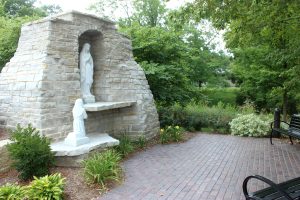 The grotto inspires the children to consider the place of prayer in their lives. (The Catholic Post/Jennifer Willems)

In addition to the Scripture passage over the gate to the outdoor classroom, a statue of the Child Jesus with his arms opened wide greets visitors. It is as tall as the preschoolers and some of them will stop and hold Jesus’ hand, Lanham said.

Msgr. Powell suggested that a Marian grotto be added at one end of the classroom, and it sits just outside the fence.

“It’s nice when we come out here and different parishioners make a special trip to go to the grotto and the kids see that,” Lanham said. “They’re like, ‘Wow. What are they doing out there?’ We’re able to bring up those things, that as an adult you can choose to come and do that, too.”

Msgr. Powell said the entire project was paid for through careful saving in the church and school budgets, and the generosity of parishioners. The pastor, principal and teacher credited that support for making the outdoor classroom a reality and embracing the “yes” environment espoused by Nature Explore.

“When a child says, ‘Can I play with that? Can I touch it?’ the answer is not always no. They hear that a lot,” Lanham said. “It’s creating a space where they feel comfortable. Where they can truly explore and we can guide them to do that.”