What is eclipsing God’s light in us?

As we approach the rare solar eclipse that will be seen from coast to coast on Aug. 21, the stories cautioning about how to view it and marveling at the wonder of the celestial event will multiply. 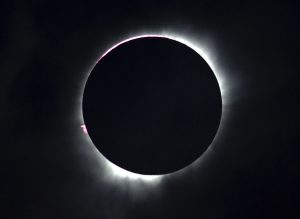 From a spiritual perspective, some will say the eclipse is a harbinger of the end times. That’s not likely the case and certainly shouldn’t be feared, though it’s healthy to realize we live in a passing world.

But the spectacle about to temporarily darken the earth at midday does offer an opportunity to reflect on our relationship with God, especially the Light of Christ which Pope Francis speaks of elsewhere on this page.

Receiving the Light of Christ at baptism, Pope Francis, Christians are called to be Christ-bearers “especially to those who are going through situations of mourning, desperation, darkness and hatred.”

So it’s a good time to ask: How are we radiating the Light of Christ? If not much, what is eclipsing it? Sin? Lack of faith? Laziness? Indifference?

As we make preparations to safely view the solar eclipse, let’s consider a summer sacrament of reconciliation, not out of fear of imminent end times, but to clear away anything and everything that is eclipsing the Light of Christ from shining through us. — Thomas J. Dermody