Bishop Daniel R. Jenky, CSC, kisses the National Touring Relic of St. John Paul II during its last visit to the Diocese of Peoria in 2013. The relic, a vial of the late pope's blood, is being brought to the diocese again Aug. 16-20 with veneration opportunities in Silvis, Havana, Champaign, Bloomington, and Peoria. (The Catholic Post file photo/Daniel Sone)

Catholics of the Diocese of Peoria will have the opportunity to celebrate Mass and venerate the National Touring Relic of St. John Paul II when it is brought to several sites in mid-August. 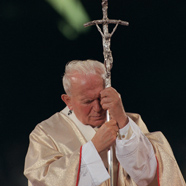 The relic, a vial of the late pope’s blood, is entrusted to the Servants of the Pierced Hearts of Jesus and Mary. The order’s foundress, Mother Adela Galindo, SCTJM, is traveling with the relic.

The relic was seen and venerated by large crowds when it was last brought to the diocese in the fall of 2013. The blood was obtained during Pope John Paul II’s hospitalization shortly before his death on April 2, 2005. It is encased in a reliquary shaped like the book of the Gospel with its pages open.

The major celebration of the diocesan tour will be a stop at St. Mary’s Cathedral in Peoria on Saturday, Aug. 19. Veneration will take place from 3 to 6 p.m., at which time Mother Adela will speak. Bishop Daniel R. Jenky, CSC, will celebrate Mass at 7:15 p.m., followed by a “Cenacle” — a period of praise, worship and adoration led by the Servants of the Pierced Hearts of Jesus and Mary.

Other scheduled visits include:

EDITOR’S NOTE: Additions to and revisions of this schedule are possible. Check back for updates.