ROCK ISLAND — An evening stop at St. Mary Parish here July 13 after a day of bicycling that began in Madison, Wisconsin, didn’t go as planned for the Biking for Babies team, but organization co-founder Jimmy Becker saw a pro-life lesson even in the flat tires and route changes that led to their two-hour late arrival.

“Each day we ride we capture a life lesson,” Becker told The Catholic Post before heading into Schroeder Hall, where a spaghetti dinner was being kept warm by two area Knights of Columbus councils following a fundraising dinner served to ride supporters an hour earlier. “Today’s life lesson was ‘We didn’t plan for this to happen.’ Well, that’s similar to what a young woman or family might be experiencing with an unplanned pregnancy. 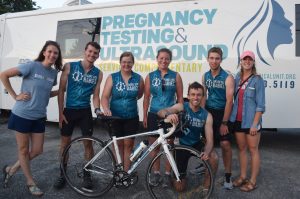 “It’s eye-opening in that respect,” added Becker. Eight years ago he and fellow University of Illinois student and bicycle enthusiast Mike Schaefer gave up their spring break to ride throughout Illinois in a new effort to open eyes, hearts, and wallets to support centers and programs assisting pregnant women in need.

Biking for Babies was born.

It would become an annual event, and this month three teams rode different regional routes that converged in St. Louis for a celebration of life on July 15. Becker was part of a seven-person team — five riders and two in a support vehicle — whose route to St. Louis began in Appleton, Wisconsin.

This year’s fundraising goal is $100,000. Among the 41 pregnancy resource centers and pro-life organizations in 17 states set to benefit are Living Alternatives Pregnancy Resource Center of Champaign and Students for Life of Illinois.

More information, including how to donate, is available at bikingforbabies.com.

The evening in Rock Island began with a 6 p.m. Mass at St. Mary Church offered on behalf of all women facing crisis pregnancies. In his homily, Father Charles Klamut praised Becker, Schaefer and those in the local pro-life community for putting their faith into action.

“Jimmy and Mike didn’t say ‘The church needs to do more for women,” said Father Klamut, pastor of St. Ambrose Parish in Milan and St. Patrick, Andalusia. “They said, ‘We’re the church. We’re just poor college students, but what can we do? Let’s ride bikes.’”

All of us, said Father Klamut, are called to do what the prophet Micah said the Lord asks of us: “do justice, love goodness, and walk humbly with your God.”

“We’re trying to create a culture of life in which abortion is not only illegal but unthinkable,” said Father Klamut, who concelebrated the Mass with Father Anthony Co, pastor of St. Mary and Sacred Heart parishes in Rock Island. “Part of the way we do that is providing help, love, and support to women who are experiencing unplanned pregnancies.

“So many of you are doing that in creative ways,” he told the assembly, which included many area pro-life leaders, including Vicky Tyler, executive director of the Women’s Choice Center of the Quad Cities. 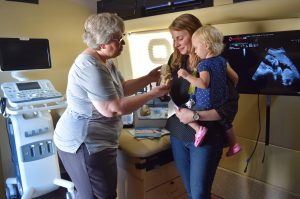 Vicki Tyler, executive director of the Women’s Choice Center of the Quad Cities, shows a model of a developing unborn child and explains ultrasound equipment to Michelle Dasso and her daughter Madelyn during a tour of the center’s mobile medical unit. The unit was present at St. Mary Church in Rock Island on July 13 for an evening welcoming the Biking for Babies team. (The Catholic Post/Tom Dermody)

Tyler spoke at the close of Mass, inviting those present to tour the center’s mobile medical unit parked that evening in the church lot. The large medical vehicle — in use since last fall after the area pro-life community raised $1.2 million to purchase, equip and staff it — offers free pregnancy testing, ultrasound imaging, and counseling.

Tyler said the ultrasound images establish a vital connection between a mother and her unborn child and almost always result in decisions not to abort.

She told the story of a pregnant, 17-year-old homeless girl who visited the mobile unit during a stop in Rock Island just two days after the center acquired it last September. Thinking her situation was hopeless, the girl asked for an ultrasound to show how far along her pregnancy was to determine what kind of abortion she could have. But when she saw her 10-week-old unborn child on screen, she began crying and asking loudly “Is that my baby?”

“As soon as that happened there was a connection in her spirit,” said Tyler. The girl eventually decided to give birth to the child and offer it for adoption as “a loving option.”

Becker, who is now married with two children and lives in Des Moines, said the long bicycle rides provide frequent opportunities for prayer. Some of the pregnancy centers they represent, as well as contributors, give them intentions to remember along the way.

The teams pray the rosary and Divine Mercy Chaplet daily. When they pass a Catholic church, “we at least make the sign of the cross to acknowledge Jesus’ presence,” said Becker.

Becker and his wife have a “daughter in heaven” lost to miscarriage, and he said “I think about her a lot on the ride.” The Beckers named her Genevieve, and if Jimmy comes close to falling during the ride, he offers a “thank you” to Genevieve for keeping his bike upright.

Ryan Arnoldy, a rider from Michigan, told the group in Rock Island that he learned about Biking for Babies during SEEK2017, a conference hosted by the Fellowship of Catholic University Students in San Antonio, Texas, last January.

“I wanted to give more to pro-life than a Facebook post or a Twitter post,” said Arnoldy. Biking for Babies enabled him to combine two passions — pro-life and fitness. Those passions kept him going even when his knee began to ache during this summer’s ride.

“This is so much bigger than a bike ride,” he told the group. “It’s such a great cause.”